In this Japanese name, the family name is Hatoyama.

Yukio Hatoyama (鳩山 由紀夫, Hatoyama Yukio, born 11 February 1947) is a former Japanese politician who served as Prime Minister of Japan from 16 September 2009 to 2 June 2010. He was the first Prime Minister from the modern Democratic Party of Japan.[2] 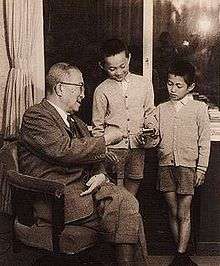 Ichirō Hatoyama and his two grandsons, Yukio and Kunio

Hatoyama comes from a prominent Japanese political family which has been likened to the Kennedy family of the United States.[3]

Hatoyama, who was born in Bunkyō, Tokyo, is a fourth generation politician. His paternal great-grandfather, Kazuo Hatoyama, was speaker of the House of Representatives of the Diet of Japan from 1896 to 1897 during the Meiji era.[4] Kazuo later served as the president of Waseda University.[4] His paternal great-grandmother, Haruko Hatoyama, was a co-founder of what is known today as Kyoritsu Women's University. His paternal grandfather, Ichirō Hatoyama, was a major politician; he served as Prime Minister and was a founder and the first President of the Liberal Democratic Party in 1956. As Prime Minister, he restored diplomatic relations with the Soviet Union, which cleared the way for Japan's membership in the United Nations.[4]

Hatoyama is the son of Iichirō Hatoyama, who was Foreign Minister for a time. His mother, Yasuko Hatoyama, is a daughter of Shojiro Ishibashi, the founder of Bridgestone Corporation and heir to his significant inheritance.[3] Yasuko Hatoyama is known as the "Godmother" within the Japanese political world for her financial contributions to both of her sons' political ambitions.[4] In particular, Yasuko donated billions of yen when Kunio and Yukio co-created their previous Democratic Party of Japan (DPJ) in 1996 to help establish her sons' fledgling political party.[4]

His younger brother, Kunio Hatoyama, served as Minister of Internal Affairs and Communications under Prime Minister Taro Aso until 12 June 2009. His younger sister-in-law Emily Hatoyama (鳩山エミリ) who is Kunio's wife, an Australian Japanese, was a TV personality in Japan.

Hatoyama worked as assistant professor (1976–1981) at Tokyo Institute of Technology and later transferred to Senshu University as associate professor (1981–1984).

Hatoyama's son Kiichiro Hatoyama (1976) is married and has given Hatoyama senior two grandchildren.

Hatoyama ran for a seat in the Hokkaido 9th District and was elected to the House of Representatives in 1986 representing the ruling LDP. In 1993 he left the LDP to form the New Party Sakigake with Naoto Kan, Masayoshi Takemura and Shūsei Tanaka (田中秀征). He and Kan then left to join the newly formed Democratic Party of Japan (1996).

Hatoyama and his younger brother, Kunio Hatoyama, co-created the party, using billions of yen donated by their mother, Yasuko.[4] Kunio Hatoyama eventually left the DPJ, saying the party had drifted too far to the left from its original centrist roots, and rejoined the Liberal Democratic Party (LDP).[4] Yukio remained with the party through its merger with several other opposition parties in 1998.

The elder Hatoyama became the Democratic Party of Japan's chairman and leader of the opposition from 1999 to 2002, after which he resigned to take responsibility for the confusion that arose from rumors of mergers with Ichirō Ozawa's then Liberal Party. He was Secretary-General of the Democratic Party of Japan (DPJ)[5] before he succeeded Ozawa as party leader following Ozawa's resignation on 11 May 2009. Hatoyama was chosen by fellow party representatives on 16 May 2009, winning 124 of the 219 votes and defeating rival Katsuya Okada.[6]

Because of his quirky hairstyle, prominent eyes, and eccentric manner, he is known by his supporters and his opposition alike as "ET" or "The Alien",[7] a nickname his wife states he earned because of how different he is from old-style Japanese politicians.[8] Another nickname commonly used by the Japanese public in press was Popo, after a children's song about a pigeon that starts with the lyric "popopo, hato popo"; the first character in Hatoyama's last name is the Japanese word for 'pigeon'.

Hatoyama entered his prime minister career with a high approval rating. The DPJ promised to end lavish spending on public works projects associated with LDP and to divert that money to tax cuts and subsidies for households.[9] Expectations were high that he would break strongly with the policies of the LDP.[10]

Hatoyama's popularity soon began to falter after the DPJ struggled to meet the high expectations they set in the midst of a sliding economy. In May 2010 he faced a possible no confidence vote,[11] and on 2 June 2010, Hatoyama announced that he would be resigning as Prime Minister.

Although Yukio Hatayoma was prime minister for less than a year, he had a wide range of achievements to his name by the time that he left office. Amongst his achievements included:

In December 2009, a finance scandal caused a drop in Hatoyama's popularity. It was revealed that Hatoyama received $4 million in donations that were improperly reported. Most of the money was given by his mother, a wealthy heiress, and some of the reported givers had the names of deceased people. The scandal raised questions about his credibility while also highlighting his privileged background.[17] However, according to NHK in 2010 prosecutors chose not to pursue him citing insufficient evidence of criminal activity, although a secretary was given a suspended prison sentence, and a review panel commented: "it is difficult to believe Hatoyama's assertion he was unaware of the falsifications."[18]

In December, the DPJ created a government task force to review government spending and pledged to make cuts equal to $32.8 billion. However, the task force cut only a quarter of that amount. Hatoyama even had to renege on a campaign promise to cut road-related taxes – including a highly symbolic gasoline tax and highway tolls.[19] Hatoyama faced criticism from fringes of his own party, some calling for a return to public works spending.[9]

Hatoyama with Barack Obama, President of the United States

Hatoyama, representing the policies DPJ campaigned on, wanted to shift Japan's focus from a more America-centric foreign policy to a more Asia-focused policy. Also, he wanted to make foreign policy decisions with America more transparent, from a popular perception that Japanese foreign policy was determined by insiders behind closed doors.[20]

The DPJ's election platform called for re-examining its ties with the United States.[10] As the 1960 Japan–U.S. security treaty celebrated its 50 year anniversary, Hatoyama called for a "close and equal" Japan–U.S. relationship, meaning giving Japan a more independent role.[21]

Hatoyama ended an eight-year refueling mission in Afghanistan, a highly symbolic move because the mission had long been criticized for violating the nation's pacifist Constitution. In order not to anger Washington, Hatoyama offered $5 billion in civilian aid for Afghanistan reconstruction.[22]

Hatoyama was also faced with the issue of the relocation of the American Futenma Marine Corps Air Base. The United States government hoped that Hatoyama would honor a 2006 agreement to relocate the base to a less populated part of Okinawa and move 8,000 marines to Guam.[23] Some voices in the DPJ demanded that America move its military bases off Okinawa islands altogether.[20] Hatoyama was torn between public opinion on Okinawa and the desire to retain strong ties with Washington.

In moving towards a more Asia-centered foreign policy, Hatoyama worked towards making relations better with nearby East Asian countries, even saying "the Japanese Islands don't belong to only Japanese".[24] Hatoyama worked to deepen economic integration with the East Asian region, pushing for a free trade zone in Asia by 2020 and proposing Haneda airport as a 24-hour hub for international flights.[25] In January 2010, he welcomed South Korea's president, calling for 'future-oriented' ties, as opposed to recalling the past, in which Japan colonized Korea.[26]

Relations with China also warmed under Hatoyama. The first few months saw an exchange of visits, including one by favored successor to China's leadership Xi Jinping, for whom Hatoyama hastily arranged an appointment with Emperor Akihito.[27] On 7 January, the Daily Yomiuri reported high-level discussion over a further exchange of visits between the two countries to promote reconciliation over historical issues. "Beijing aims to ease anti-Japan sentiment among the Chinese public by having Hatoyama visit Nanjing and express a sense of regret about the Sino-Japanese War", the paper reported.[28]

On 2 June 2010, Hatoyama announced his resignation as Prime Minister before a meeting of the Japanese Democratic Party. He cited breaking a campaign promise to close an American military base on the island of Okinawa as the main reason for the move. On 28 May 2010, soon after and because of increased tensions from the sinking of a South Korean navy ship allegedly by North Korea,[29] Hatoyama had made a deal with U.S. President Barack Obama[30][31][32][33][34] to retain the base for security reasons, but the deal was unpopular in Japan. He also mentioned money scandals involving a top party leader, Ichirō Ozawa, who resigned as well, in his decision to step down.[30] Hatoyama had been pressed to leave by members of his party after doing poorly in polls in anticipation of an upper house election in July 2010.[35]

After stepping down as prime minister Hatoyama continued to serve as a DPJ diet member. When Prime Minister Yoshihiko Noda introduced legislation to raise the consumption tax from 5% to 10% Hatoyama was one of 57 DPJ lower house lawmakers who voted against the bill.[36] His membership in the DPJ was suspended for six months, subsequently reduced to three.[37]

Unlike some of the consumption tax rebels, Hatoyama did not leave the DPJ to join Ichiro Ozawa's People's Life First party, but continued to act within the DPJ to oppose both the consumption tax increase and the restart of nuclear plants. On 20 July 2012 he addressed a crowd of protesters outside the prime minister's residence, saying it was premature to restart nuclear reactors.[38]

In the lead-up to the 16 December 2012 general election the DPJ announced that it would not endorse candidates who did not agree to follow its current policies, including the consumption tax hike and support for joining the negotiations to enter the Trans-Pacific Partnership. On 21 November Hatoyama announced that he would retire from politics.[39] Hatoyama was later expelled from the party.

On 9 January 2013, Hatoyama issued a formal apology to the victims of Japanese war crimes in China during a visit to Nanjing. He also urged the Japanese government to acknowledge the dispute between the two countries concerning sovereignty of the Diaoyu/Senkaku Islands.[40]

On 21 March 2013, Hatoyama was appointed as the honorary chairman and a senior consultant of Hoifu Energy Group Limited.[41]

In March 2015, Hatoyama visited Crimea and defended referendum in Crimea as constitutional.[42]

Hatoyama practices the Transcendental Meditation technique and will deliver the Maharishi University of Management commencement address on May 23, 2015 and will be awarded an honorary degree of Doctor of Laws.[43]

In 2010, Time magazine's "Time 100" elected Hatoyama as No. 6 among the 100 most influential people in the world. It said Hatoyama had "helped change his country from a de facto one-party state into a functional democracy", through the DPJ victory in the 2009 general election.[45]