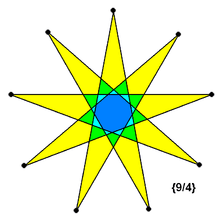 The boundary of the regular enneagram {9/4} winds around its centre 4 times, so it has a density of 4.

Tessellations with overlapping faces can similarly define density as the number of coverings of faces over any given point.[1]

The density of a star polygon is the number of times that the polygonal boundary winds around its center; it is the winding number of the boundary around the central point.

For a regular star polygon {p/q}, the density is q.

It can be visually determined by counting the minimum number of edge crossings of a ray from the center to infinity.

Arthur Cayley used density as a way to modify Euler's polyhedron formula (V − E + F = 2) to work for the regular star polyhedra, where dv is the density of a vertex figure, df of a face and D of the polyhedron as a whole:

Hess further generalised the formula for star polyhedra with different kinds of face, some of which may fold backwards over others. The resulting value for density corresponds to the number of times the associated spherical polyhedron covers the sphere.

This allowed Coxeter et al. to determine the densities of the majority of the uniform polyhedra.[3]

For hemipolyhedra, some of whose faces pass through the center, the density cannot be defined. Non-orientable polyhedra also do not have well-defined densities.

There are 10 regular star polychora or 4-polytopes (called the Schläfli–Hess polychora), which have densities between 4, 6, 20, 66, 76, and 191. They come in dual pairs, with the exception of the self-dual density-6 and density-66 figures.