This is a generalization of the older category of semiregular polytopes, but also includes the regular polytopes. Further, star regular faces and vertex figures (star polygons) are allowed, which greatly expand the possible solutions. A strict definition requires uniform polytopes to be finite, while a more expansive definition allows uniform honeycombs (2-dimensional tilings and higher dimensional honeycombs) of Euclidean and hyperbolic space to be considered polytopes as well.

Equivalently, the Wythoffian polytopes can be generated by applying basic operations to the regular polytopes in that dimension. This approach was first used by Johannes Kepler, and is the basis of the Conway polyhedron notation.

An extended Schläfli symbol can be used for representing rectified forms, with a single subscript:

Truncation operations that can be applied to regular n-polytopes in any combination. The resulting Coxeter diagram has two ringed nodes, and the operation is named for the distance between them. Truncation cuts vertices, cantellation cuts edges, runcination cuts faces, sterication cut cells. Each higher operation also cuts lower ones too, so a cantellation also truncates vertices.

In addition combinations of truncations can be performed which also generate new uniform polytopes. For example, a runcitruncation is a runcination and truncation applied together.

If all truncations are applied at once the operation can be more generally called an omnitruncation.

An alternation of a truncated cuboctahedron produces a snub cube.

One special operation, called alternation, removes alternate vertices from a polytope with only even-sided faces. An alternated omnitruncated polytope is called a snub.

The resulting polytopes always can be constructed, and are not generally reflective, and also do not in general have uniform polytope solutions.

A smaller number of nonreflectional uniform polytopes have a single vertex figure but are not repeated by simple reflections. Most of these can be represented with operations like alternation of other uniform polytopes.

Vertex figures for single-ringed Coxeter diagrams can be constructed from the diagram by removing the ringed node, and ringing neighboring nodes. Such vertex figures are themselves vertex-transitive.

Multiringed polytopes can be constructed by a slightly more complicated construction process, and their topology is not a uniform polytope. For example, the vertex figure of a truncated regular polytope (with 2 rings) is a pyramid. An omnitruncated polytope (all nodes ringed) will always have an irregular simplex as its vertex figure.

Uniform polytopes have equal edge-lengths, and all vertices are an equal distance from the center, called the circumradius.

The only one-dimensional polytope is the line segment. It corresponds to the Coxeter family A1.

In three dimensions, the situation gets more interesting. There are five convex regular polyhedra, known as the Platonic solids:

In addition to these, there are also 13 semiregular polyhedra, or Archimedean solids, which can be obtained via Wythoff constructions, or by performing operations such as truncation on the Platonic solids, as demonstrated in the following table:

There is also the infinite set of prisms, one for each regular polygon, and a corresponding set of antiprisms.

The Wythoffian uniform polyhedra and tilings can be defined by their Wythoff symbol, which specifies the fundamental region of the object. An extension of Schläfli notation, also used by Coxeter, applies to all dimensions; it consists of the letter 't', followed by a series of subscripted numbers corresponding to the ringed nodes of the Coxeter diagram, and followed by the Schläfli symbol of the regular seed polytope. For example, the truncated octahedron is represented by the notation: t0,1{3,4}.

In four dimensions, there are 6 convex regular 4-polytopes, 17 prisms on the Platonic and Archimedean solids (excluding the cube-prism, which has already been counted as the tesseract), and two infinite sets: the prisms on the convex antiprisms, and the duoprisms. There are also 41 convex semiregular 4-polytope, including the non-Wythoffian grand antiprism and the snub 24-cell. Both of these special 4-polytope are composed of subgroups of the vertices of the 600-cell.

The four-dimensional uniform star polytopes have not all been enumerated. The ones that have include the 10 regular star (Schläfli-Hess) 4-polytopes and 57 prisms on the uniform star polyhedra, as well as three infinite families: the prisms on the star antiprisms, the duoprisms formed by multiplying two star polygons, and the duoprisms formed by multiplying an ordinary polygon with a star polygon. There is an unknown number of 4-polytope that do not fit into the above categories; over one thousand have been discovered so far. 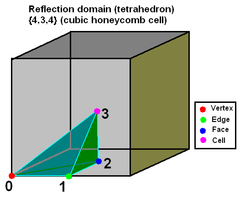 Example tetrahedron in cubic honeycomb cell.There are 3 right dihedral angles (2 intersecting perpendicular mirrors):Edges 1 to 2, 0 to 2, and 1 to 3. 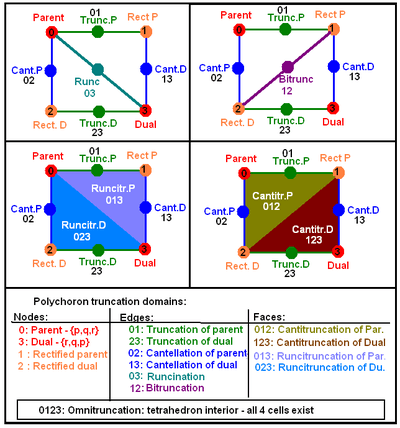 Each of the sixteen regular 4-polytopes is generated by one of four symmetry groups, as follows:

(The groups are named in Coxeter notation.)

Eight of the convex uniform honeycombs in Euclidean 3-space are analogously generated from the cubic honeycomb {4,3,4}, by applying the same operations used to generate the Wythoffian uniform 4-polytopes.

For a given symmetry simplex, a generating point may be placed on any of the four vertices, 6 edges, 4 faces, or the interior volume. On each of these 15 elements there is a point whose images, reflected in the four mirrors, are the vertices of a uniform 4-polytope.

The extended Schläfli symbols are made by a t followed by inclusion of one to four subscripts 0,1,2,3. If there's one subscript, the generating point is on a corner of the fundamental region, i.e. a point where three mirrors meet. These corners are notated as

(For the two self-dual 4-polytopes, "dual" means a similar 4-polytope in dual position.) Two or more subscripts mean that the generating point is between the corners indicated.

The 15 constructive forms by family are summarized below. The self-dual families are listed in one column, and others as two columns with shared entries on the symmetric Coxeter diagrams. The final 10th row lists the snub 24-cell constructions. This includes all nonprismatic uniform 4-polytopes, except for the non-Wythoffian grand antiprism, which has no Coxeter family.

The following table defines all 15 forms. Each trunction form can have from one to four cell types, located in positions 0,1,2,3 as defined above. The cells are labeled by polyhedral truncation notation.

In six, seven and eight dimensions, the exceptional simple Lie groups, E6, E7 and E8 come into play. By placing rings on a nonzero number of nodes of the Coxeter diagrams, one can obtain 63 new 6-polytopes, 127 new 7-polytopes and 255 new 8-polytopes. A notable example is the 421 polytope.

A scaliform polytope or honeycomb is vertex-transitive, like a uniform polytope, but only requires regular polygon faces while cells and higher elements are only required to be orbiforms, equilateral, with their vertices lying on hyperspheres. For 4-polytopes, this allows a subset of Johnson solids along with the uniform polyhedra. Some scaliforms can be generated by an alternation process, leaving, for example, pyramid and cupola gaps.