Aqidah (Arabic: عقيدة‎, translit. ʿaqīdah‎, plural عقائد, ʿaqāʾid, also spelled aqeeda or ʿaqīda) is an Islamic term meaning "creed". Many schools of Islamic theology expressing different views on aqidah exist. Any religious belief system, or creed, can be considered an example of aqidah. However, this term has taken a significant technical usage in Muslim history and theology, denoting those matters over which Muslims hold conviction. It is a branch of Islamic studies describing the beliefs of Islam.

Literally, the word ʿaqīdah is derived from the Semitic root ʿqd (ʿaqada), which means "to tie" or "knot".

According to Muslim scholar Cyril Glasse, "systematic statements of belief became necessary, from early Islam on, initially to refute heresies, and later to distinguish points of view and to present them, as the divergences of schools of theology or opinion increased.[1]

The six articles of faith or belief, derived from the Quran and Sunnah (Arkan al-Iman).[4] is accepted by all Muslims. While there are differences between Shia and Sunni Islam and other different schools or sects concerning issues such as the attributes of God or about the purpose of angels, the six articles are not disputed.

The six Sunni articles of belief are:

The first five are based on several Qurʾānic creeds:

The sixth point made it into the creed because of the first theological controversy in Islām. Although not connected with the sunni-shiʿi controversy about the succession, the majority of Twelfer Shiʿites do not stress God's limitless power (qadar), but rather is boundless justice ʿadl as the sixth point of believe – this does not mean that Sunnis deny his justice, or Shiʿites negate his power, just the emphasis is different.

In Sunni and Shia view, having Iman literally means to have belief in Six articles. However the importance of Iman relies heavily upon reasons. Islam explicitly asserts that belief should be maintained in that which can be proven using faculties of perception and conception.

Tawhid ("doctrine of Oneness") is the concept of monotheism in Islam. It is the religion's most fundamental concept and holds that God (Allah) is one (wāḥid) and unique (āḥad), and the Only One worthy of Worship which is exactly what Jews and Christians also believe that only the Uncreated can be worshiped. A creature cannot be worshiped. This is idolatry.

According to Islamic belief, Allah is the proper name of God, and humble submission to his will, divine ordinances and commandments is the pivot of the Muslim faith. "He is the only God, creator of the universe, and the judge of humankind." "He is unique (wāḥid) and inherently one (aḥad), all-merciful and omnipotent." The Qur'an declares "the reality of Allah, His inaccessible mystery, His 99 descriptive names expressing a quality characteristic , and His actions on behalf of His creatures.

Iman, in Islamic theology denotes a believer's faith in the metaphysical aspects of Islam.[6][7] Its most simple definition is the belief in the six articles of faith, known as arkān al-īmān.

The Hadith of Gabriel includes the Five Pillars of Islam (Tawhid, Salat, Sawm, Zakat, Hajj) in answer to the question, "O messenger of God, what is Islam?" This hadith is sometimes called the "truly first and most fundamental creed".[1] 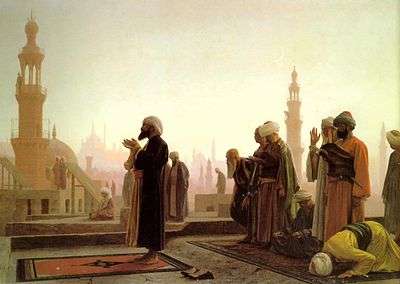 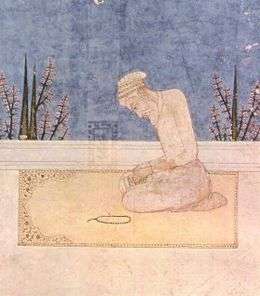 Salat is the practice of formal worship in Islam. Its importance for Muslims is indicated by its status as one of the Five Pillars of Islam, with a few dispensations for those for whom it would be difficult. People who find it physically difficult can perform Salat in a way suitable for them. To perform valid Salat, Muslims must be in a state of ritual purity, which is mainly achieved by ritual ablution, (wuḍūʾ), according to prescribed procedures. 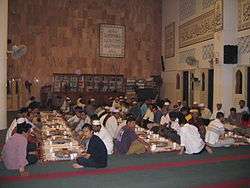 Ending the fast at a mosque.

In the terminology of Islamic law, sawm means to abstain from eating, drinking (including water) and sexual intercourse from dawn until dusk. The observance of sawm during the holy month of Ramadan is one of the Five Pillars of Islam, but is not confined to that month.

Zakat is the practice of charitable giving by Muslims based on accumulated wealth and is obligatory for all who are able to do so. It is considered to be a personal responsibility for Muslims to ease economic hardship for others and eliminate inequality. 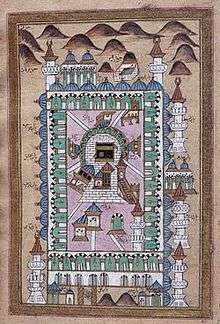 A 16th century illustration of Islam's holiest shrine, the Ka'aba.

The Hajj is an Islamic pilgrimage to Mecca and the largest gathering of Muslims in the world every year. It is one of the five pillars of Islam, and a religious duty which must be carried out by every able-bodied Muslim who can afford to do so at least once in his or her lifetime.

In addition, some Muslims include Jihad and Dawah as part of ʿAqīdah

Jihad literally means to endeavor, strive, labor to apply oneself, to concentrate, to work hard, to accomplish. It could be used to refer to those who physically, mentally or economically serve in the way of Allah.[8]

Da‘wah ("invitation") means the proselytizing or preaching of Islam. Da‘wah literally means "issuing a summon" or "making an invitation", being an active participle of a verb meaning variously "to summon" or "to invite". A Muslim who practices da‘wah, either as a religious worker or in a volunteer community effort, is called a dā‘ī (داعي plural du‘āh, gen: du‘āt دعاة).

A dā‘ī is thus a person who invites people to understand Islam through dialogue, not unlike the Islamic equivalent of a missionary inviting people to the faith, prayer and manner of Islamic life.

Eschatology is literally understood as the last things or ultimate things and in Muslim theology, eschatology refers to the end of this world and what will happen in the next world or hereafter. Eschatology covers the death of human beings, their souls after their bodily death, the total destruction of this world, the resurrection of human souls, the Last Judgment of human deeds by God after the resurrection, and the rewards and punishments for the believers and non-believers respectively. The places for the believers in the hereafter are known as Paradise and for the non-believers as Hell.

Muslim theology is the theology and interpretation of creed (aqidah) that derived from the Qur'an and Hadith. The contents of Muslim theology can be divided into theology proper such as theodicy, eschatology, anthropology, apophatic theology, and comparative religion. In the history of Muslim theology, there have been theological schools among Muslims displaying both similarities and differences with each other in regard to beliefs.

Kalām is the Islamic philosophy of seeking theological principles through dialectic. In Arabic, the word literally means "speech/words". A scholar of kalām is referred to as a mutakallim (Muslim theologian; plural mutakallimūn). There are many schools of Kalam, the main ones being the Ash'ari and Maturidi schools in Sunni Islam.

For the Atharis, the "clear" meaning of the Qur'an and especially the prophetic traditions have sole authority in matters of belief, as well as law, and to engage in rational disputation, even if one arrives at the truth, is absolutely forbidden.[9] Atharis engage in an amodal reading of the Qur'an, as opposed to one engaged in Ta'wil (metaphorical interpretation). They do not attempt to rationally conceptualize the meanings of the Qur'an and believe that the real meanings should be consigned to God alone (tafwid).[10] This theology was taken from exegesis of the Quran and statements of the early Muslims and later codified by a number of scholars including Ahmad ibn Hanbal and Ibn Qudamah.

Shiʿi Muslims hold that there are five articles of belief. Similar to the Sunnis, the Shiʿis do not believe in complete predestination, or complete free will. They believe that in human life there is a both free will and predestination.

The branch of Islam known as Isma'ilism is the second largest Shiʿi community. They observe the following extra pillars:

In terms of the relationship between human beings and their creator, the Muʿtazila emphasize human free will over predestination. They also reduced the divine attributes to the divine essence.[11]

Many Muslim scholars have attempted to explain Islamic creed in general, or specific aspects of aqidah. The following list contains some of the most well-known literature.