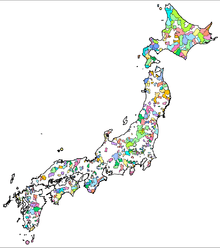 Districts of Japan. Notice that these are the remaining areas of formerly large districts, which took away portions of the original subdivisions as towns merged.

The district (郡, gun) was used as an administrative unit in Japan between 1878 and 1921 and was roughly equivalent to the county of the United States, ranking at the level below prefecture and above town or village, same as city.[1] As of 2008, cities belong directly to prefectures and are independent from districts. In Japan, towns and villages belong to districts and the districts possess little to no administrative authority. The districts are used primarily in the Japanese addressing system and to identify the relevant geographical areas and collections of nearby towns and villages.

The district was initially called kōri and has ancient roots in Japan. Although the Nihon Shoki says they were established during the Taika Reforms, kōri was originally written 評.[2] It was not until the Taihō Code that kōri came to be written 郡. Under the Taihō Code, the administrative unit of province (国, kuni) was above district, and the village (里 or 郷 sato) was below.

Hokkaidō Prefecture, however, came much later to the ritsuryō provincial system, only a few years before the prefectural system was introduced, so its eleven provinces included several districts with the same names: