The bureaucratic administration of Japan is divided into three basic levels; national, prefectural and municipal. Below the national government there are 47 prefectures, six of which are further subdivided into sub-prefectures to better service large geographical areas or remote islands. The municipalities (cities, towns and villages) are the lowest level of government; the twenty most-populated cities outside of Tokyo are known as designated cities and are sub-divided into wards. 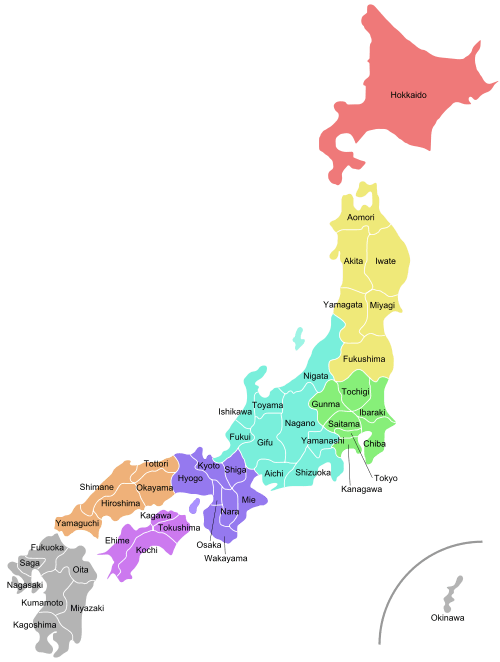 The top tier of administrative divisions are the 47 prefectural entities: 43 prefectures (県, ken) proper, 2 urban prefectures (府, fu, Osaka, and Kyoto), 1 "circuit" (道, dō, Hokkaido), and 1 "metropolis" (都, to, Tokyo). Although different in name they are functionally the same.

Hokkaido is referred to as a "circuit" (道, dō), this term was originally used to refer to Japanese regions consisting of several provinces. This was also a historical usage of the character in China.

Osaka Prefecture and Kyoto Prefecture are referred to as a "urban prefecture" (府, fu). The Classical Chinese character from which this is derived implies a core urban zone of national importance.

"Prefecture" (県, ken) are the most common types of prefectural divisions total of 43 ken. The Classical Chinese character from which this is derived carries a rural or provincial connotation, now this character is used as county in China.

There are only two types of Sub-prefectural divisions: Subprefecture and District.

Districts (郡, gun) were administrative units in use between 1878 and 1921 that were roughly equivalent to the counties of China or the United States. In the 1920s municipal functions were transferred from district offices to the offices of the towns and villages within the district. District names remain in the postal address of towns and villages, and districts are sometimes used as boundaries for electoral districts, but otherwise serve no official function. The Classical Chinese character from which this is derived means commandery. 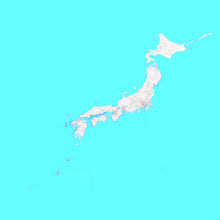 Cities in Japan are categorize into different four types from the highest designated city, core city, special city, and a regular city the lowest.

A core city (中核市, Chūkakushi) is a Japanese city that has a population greater than 300,000 and an area greater than 100 square kilometers, although special exceptions may be made by order of the cabinet for cities with populations under 300,000 but over 200,000.[2] Core city was created by the first clause of Article 252, Section 22 of the Local Autonomy Law of Japan.

A special city (特例市, Tokureishi) of Japan is a city with a population of at least 200,000. This category was established by the Local Autonomy Law, article 252 clause 26.

A city (市, shi) is a local administrative unit in Japan with a population of at least 50,000 of which at least 60% of households must be established in a central urban area, and at least 60% of households must be employed in commerce, industry or other urban occupations. Cities are ranked on the same level as towns (町, machi) and villages (村, mura); the only difference is that they are not a component of districts (郡, gun). Like other contemporary administrative units, they are defined by the Local Autonomy Law of 1947.

A town (町; chō or machi) is a local administrative unit in Japan. It is a local public body along with prefecture (ken or other equivalents), city (shi), and village (mura). Geographically, a town is contained within a prefecture.

A village (村, mura, sometimes son) is a local administrative unit in Japan. It is a local public body along with prefecture (県, ken, or other equivalents), city (市, shi), and town (町, chō, sometimes machi). Geographically, a village's extent is contained within a prefecture. It is larger than an actual settlement, being in actuality a subdivision of a rural district (郡, gun), which are subdivided into towns and villages with no overlap and no uncovered area.

The special wards (特別区, tokubetsu-ku) are 23 municipalities that together make up the core and the most populous part of Tokyo, Japan. Together, they occupy the land that was originally the City of Tokyo before it was abolished in 1943 to become part of the newly created Tokyo Metropolis. The special wards' structure was established under the Japanese Local Autonomy Law and is unique to Tokyo.

A ward (区, ku) is a subdivision of the cities of Japan that are large enough to have been designated by government ordinance.[3]

Although the details of local administration have changed dramatically over time, the basic outline of the current two-tiered system since the abolition of the han system by the Meiji government in 1871 are similar. Before the abolition of the han system Japan was divided into province (国, kuni) then subdivided into district (郡, gun) and then village (里/郷, sato) at the bottom.