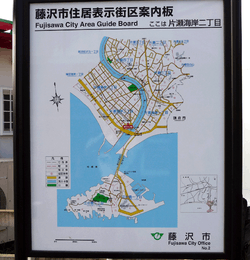 The Area Guide Board at Katase-Kaigan 2-chōme area, Fujisawa, Kanagawa. Block (banchi) is indicated with circled number and building number (gō) is not displayed.

The Japanese addressing system is used to identify a specific location in Japan. When written in Japanese characters, addresses start with the largest geographical entity and proceed to the most specific one. When written in Latin characters, addresses follow the convention used by most Western addresses and start with the smallest geographic entity (typically a house number) and proceed to the largest. The Japanese system is complex and idiosyncratic, the product of the natural growth of urban areas, as opposed to the systems used in cities that are laid out as grids and divided into quadrants or districts. 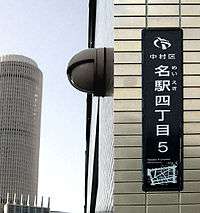 Japanese addresses begin with the largest division of the country, the prefecture. These are generally called ken (県), but there are also three other special prefecture types: to (都) for Tokyo, dō (道) for Hokkaidō and fu (府) for the two urban prefectures of Osaka and Kyoto.

Following the prefecture is the municipality. For a large municipality this is the city (shi, 市). Cities with a large enough population, called designated cities, can be further broken down into wards (ku, 区). Tokyo has both ordinary cities and special wards (tokubetsu-ku, 特別区), each of which has the status of a city. For smaller municipalities, the address includes the district (gun, 郡) followed by the town (chō or machi, 町) or village (mura or son, 村). In Japan, a city is separate from districts, which contain towns and villages.

For addressing purposes, municipalities may be divided into chō or machi (町, which may be pronounced either way depending on the particular case) and/or aza (字). Confusingly, despite using the same character as town, the machi here is purely a unit of address, not administration; likewise, there are also ku address divisions that are not administrative special wards. There are two common schemes:

However, exceptions abound, and the line between the schemes is often blurry as there are no clear delimiters for machi, aza, etc.

Below this level, two styles of addressing are possible.

In both styles, since all address elements from chōme down are numeric, in casual use it is common to form them into a string separated by hyphens or the possessive suffix の (no), resulting in Asakusa 4-5-10 or Asakusa 4の5の10. This renders the two styles indistinguishable, but since each municipality adopts one style or the other, there is no risk of ambiguity. The apartment number may also be appended, resulting in 4-5-10-103. 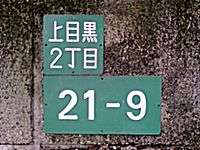 Street names are seldom used in postal addresses (except in Kyoto and some Hokkaidō cities such as Sapporo), and most Japanese streets do not have names.

Banchi blocks often have an irregular shape, as banchi numbers were assigned by order of registration in the older system, meaning that especially in older areas of the city they will not run in a linear order. It is for this reason that when giving directions to a location, most people will offer cross streets, visual landmarks and subway stations, such as "at Chūō-dori and Matsuya-dori across the street from Matsuya and Ginza station" for a store in Tokyo. In fact, many businesses have maps on their literature and business cards. In addition, signs attached to utility poles often specify the city district name and block number, and detailed block maps of the immediate area are sometimes posted near bus stops and train station exits.

In addition to the address itself, all locations in Japan have a postal code. After the reform of 1998, this begins with a three-digit number, a hyphen, and a four-digit number, for example 123-4567. A postal mark, 〒, may precede the code to indicate that the number following is a postal code.

In Japanese, the address is written in order from largest unit to smallest, with the addressee's name last of all. For example, the address of the Tokyo Central Post Office is

The order is reversed when writing in roman letters, to better suit Western conventions. The format recommended by Japan Post[2] is:

In this address, Tokyo is the prefecture; Chuo-ku is one of the special wards; Yaesu 1-Chome is the name of the city district; and 5-3 is the city block and building number. In practice[3] it is common for the chōme to be prefixed, as in Japanese, resulting in the somewhat shorter

Note while almost all elements of the address are reverse in roman, connected strings of numbers are treated as units and not reversed. Firstly, the "city block and building number" is a unit, and its digits are not reversed – in this example it is "5-3" in both Japanese and roman, though the Japanese (literally Yaesu 1-Chōme 5-3) is partly reversed to "5-3, Yaesu 1-Chōme" in roman if chōme is separate. Similarly, if the chōme is included, these also form a unit, so in this example the string is 1-5-3 in both Japanese and roman.

As mentioned above, there are certain areas of Japan that use somewhat unique address systems. Sometimes the differing system has been incorporated into the official system, as in Sapporo, while in Kyoto the system is completely different from, but used alongside the official system. Kyoto and Sapporo have addresses based on their streets being laid out in a grid plan, unlike most Japanese cities. 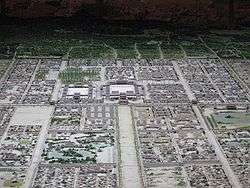 Kyoto was laid out on a grid in 794 (Heian-kyō), and grid-based addresses are used.

Although the official national addressing system is in use in Kyoto – in Chiban style, with ward (区, ku), district (丁目, chōme), and land number (番地, banchi), the chō divisions are very small, numerous, and there is often more than one chō with the same name within a single ward, making the system extremely confusing. As a result, most residents of Kyoto use an unofficial system based instead on street names, a form of vernacular geography. This system is, however, recognized by the post office and by government agencies.

For added precision, the street-based address can be given, followed by the chō and land number. Sometimes multiple houses share a given land number, in which case the name (either just family name, or full name of resident) must also be specified; this name is generally displayed in front of the house on a hyōsatsu (表札, name plate), often decoratively presented, as house numbers are in other countries.

For instance, the address of Kyoto Tower is listed on their website as:[4]

This address means "south of the intersection of Karasuma and Shichijō streets" – more precisely, "on Karasuma, below (south of) Shichijō" (Karasuma runs north-south, while Shichijō is an east-west cross street). The street address may alternatively be given as 烏丸通七条下ル (with street (通, dōri) inserted), indicating clearly that the address is on Karasuma street.

However, the system is flexible and allows for various alternatives, such as:

For less well known buildings, the official address is often given after the informal one, as in the address for the Shinatora Ramen restaurant:

Sapporo’s system, though official, differs in structure from regular Japanese addresses. The city-center is divided into quadrants by two intersecting roads; blocks are then named based on their distance from this point, and farther from the city center, multiple blocks are included in each. The east-west distance is indicated by chōme (a slightly unorthodox usage of chōme), while the north-south distance is indicated by jō, which has been incorporated into the chō name.

The address to Sapporo JR Tower is:[5]

This address indicates that it is the fifth building on a block located 5 jō north and 2 chōme west of the center, named with the actual cardinal names of kita (north), minami (south), nishi (west), and higashi (east). The directional names for jō extend for about 7 kilometers to the north/south along the main Soseigawa Dori, but only about 3 kilometers at the most to the east and west; outside of that area, jō have other names, though the starting point of each is still the corner in the direction of the city center, often using landmarks such as the Hakodate Main Line or large roads to mark the new numbering.

For example, far in the outskirts is the Sapporo Tachibana Hospital, at:[6]

Building 12 on block 3 of a chōme measuring 11 jō north and 2 chōme west of where the Hokadate Main Line meets Tarukawa Street. Or Toyohira Ward office, at:[7]

Building 1 on block 1 of a chōme measuring 6 jō south and 10 chōme east of where a small street meets the Toyohira River. The direction is understood based on the quadrant of the city the jō is considered to be in, which may be off from the actual direction to the city center, depending on the landmark used.

Far-flung and less crowded parts of the city may instead use a standard chō name, rather than a numbered jō, such as Makomanai.

Many areas of Ōita Prefecture including the cities of Ōita and Usuki commonly use an unofficial parallel system known as "administrative wards" (行政区, gyōseiku) or "neighbourhood council names" (自治会名, jichikaimei).[8] While outwardly similar, these addresses end in kumi (組) or ku (区):

As the names indicate, these derive from traditional neighbourhood councils. While they continue to be used locally (e.g. school and electoral districts) and may be accepted for mail delivery, they are not considered official addresses, and individual buildings in each kumi will also have a standard ōaza-banchi address.[8] For example, Usuki City Hall, while within Suzaki 4-chome 1-kumi, has the formal address of Usuki 72-1, which may be prepended with ōaza (大字) for clarity:

Some cities in Ishikawa Prefecture, including Kanazawa and Nanao, sometimes use katakana in the iroha ordering (イ・ロ・ハ・ニ...) instead of numbers for blocks. These are called bu (部). For example, the address of the Kagaya Hotel in Nanao is:[9]

Some cities, including parts of Nagaoka, Niigata, use jikkan (甲・乙・丙...) prefixed to the block number to indicate traditional divisions. These function similarly to chōme and are treated as such in addresses. For example, Yoita police station in Nagaoka has the address:[10]

The current addressing system was established after World War II as a slight modification of the scheme used since the Meiji era.

For historical reasons, names quite frequently conflict. In Hokkaidō many place names are identical to names found in the rest of Japan; this is largely the result of past immigration into Hokkaidō of people from mainland Japan. Historians note that there is also a significant similarity between place names in Kansai region and those in northern Kyūshū. See Japanese place names for more.

Named Roads, or 通り (Dōri), are roads or sections deemed noteworthy and given a name. Unlike in other nations, named roads are not used for addressing but merely for ceremonial purposes.