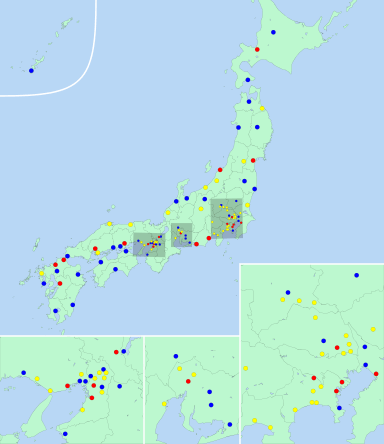 A special city (特例市, Tokureishi) of Japan is a city with a population of at least 200,000, and is delegated functions normally carried out by prefectural governments. Those functions are a subset of the ones delegated to a core city.

This category was established by the Local Autonomy Law, article 252 clause 26. They are designated by the Cabinet after a request by the city council and the prefectural assembly.

The special cities are not the same as the special wards of Tokyo.

As of April 2016, 37 cities have been designated special cities:

Cities that meet requirements but are not yet designated

The following cities have the population of more than 200,000 people but have not yet been designated (Scheduled to become a special city are not in this list)