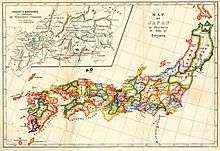 The provinces in about 1600, from Murdoch and Yamagata. 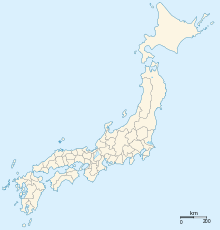 The provinces in the Kamakura period to 1868.

Provinces of Japan (令制国, Ryōseikoku) were administrative divisions before the modern prefecture system was established, when the islands of Japan were divided into tens of kuni (国, countries), usually known in English as provinces.[1] Each province was divided into gun (郡, districts, earlier called kōri).

The provinces were originally established by Ritsuryō as both administrative units and geographic regions.

In the late Muromachi period, however, their function was gradually supplanted by the domains of the sengoku-daimyo. Under the rule of Toyotomi Hideyoshi, the provinces were supplemented as primary local administrative units. The local daimyo's fiefs were developed.[2]

In the Edo period, the fiefs became known as han. Imperial provinces and shogunal domains made up complementary systems. For example, when the shogun ordered daimyo to make a census or to make maps, the work was organized in terms of the boundaries of the provincial kuni.[3]

To date, no official order has been issued abolishing provinces. Provinces are nonetheless today considered obsolete, although their names are still widely used in names of natural features, company names, and brands. In the early 2000s, former governor of Nagano Prefecture, Yasuo Tanaka (president of New Party Nippon), proposed the renaming of his prefecture to "Shinshū" (信州, a name derived from Shinano Province) because it is still widely used, as in Shinshū soba (信州そば), Shinshū miso (信州味噌) and Shinshu University.

These province names are considered to be mainly of historical interest. They are also used for the names of items, including family names, most of which were popularized in or after the Edo period. Examples include sanuki udon, iyokan, tosa ken, and awa odori. Japan Rail stations also use them in names to, aside from the historical background, distinguish themselves from similarly named stations in other prefectures.

Some of the province names are used to indicate distinct parts of the current prefectures along with their cultural and geographical characteristics. In many cases these names are also in use with directional characters, e.g. Hoku-Setsu (北摂) meaning Northern (北) Settsu (摂津) area.

The districts are still considered prefectural subdivisions, however in case of being part of a merger or division of old provinces, they may be shared among several prefectures (such as the original Adachi District of Musashi, which is now divided between Adachi Ward of Tokyo and Kita-Adachi District in Saitama). Many of these old provincial districts have been dissolved as their chief towns have merged into larger cities or towns. See individual prefecture pages for mergers and abolitions of districts.

Detailed maps of the provinces at different times can be found at: