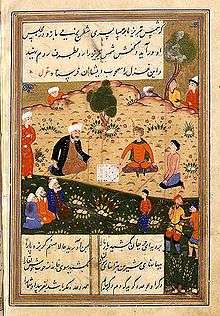 Dīvān-e Kabīr ("the great divan") contains poems in several different styles of Eastern-Islamic poetry (e.g. odes, eulogies, quatrains, etc.). It contains 44,282 lines (according to Foruzanfar's edition,[1] which is based on the oldest manuscripts available): 3,229 odes, or ghazals (total lines = 34,662); 44 tarji-bands (total lines = 1698); and 1,983 quatrains (total lines = 7932).[2] Although most of the poems are in New Persian, there are also some in Arabic, and a small number of mixed Persian/Greek and Persian/Turkish poems. Dīvān-e Šams-e Tabrīzī is named in honour of Rumi's spiritual teacher and friend Shams Tabrizi.