For other uses, see Fuzuli (disambiguation).

Fużūlī (Azerbaijani: Füzuli فضولی, c. 1494 – 1556) was the pen name of the Azerbaijani[1][2][3] of the Bayat tribes of Oghuz[4][5][6] poet, writer and thinker Muhammad bin Suleyman (Azerbaijani: Məhəmməd Ben Süleyman محمد بن سليمان). Often considered one of the greatest contributors to the Dîvân tradition of Azerbaijani literature,[7] Fuzûlî in fact wrote his collected poems (dîvân) in three different languages: in his native Azerbaijani[8] and also in Persian and Arabic. Although his Turkic works are written in the Azerbaijani language of the Turkic language family, he was well-versed in both the Ottoman and the Chagatai Turkic literary traditions as well. He was also well versed in mathematics and astronomy.[9]

Fuzûlî is generally believed to have been born around 1494 in what is now Iraq, when the area was under Ak Koyunlu Turkmen rule; he was probably born in either Karbalā’ or an-Najaf.[9] He is believed to belong to Bayat tribe, one of the Turkic Oghuz tribes who were related to the Ottoman Kayı clan and were scattered throughout the Middle East, Anatolia, and the Caucasus at the time. Though Fuzûlî's ancestors had been of nomadic origin, the family had long since settled in towns. 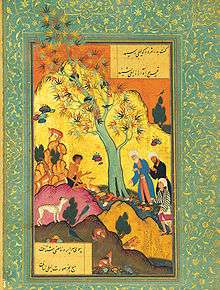 Fuzûlî appears to have received a good education, first under his father—who was a mufti in the city of Al Hillah—and then under a teacher named Rahmetullah.[10] It was during this time that he learned the Persian and Arabic languages in addition to his native Azeri. Fuzûlî showed poetic promise early in life, composing sometime around his twentieth year the important masnavi entitled Beng ü Bâde (بنگ و باده; "Hashish and Wine"), in which he compared the Ottoman Sultan Bayezid II to hashish and the Safavid shah Ismail I to wine, much to the advantage of the latter.

One of the few things that is known of Fuzûlî's life during this time is how he arrived at his pen name. In the introduction to his collected Persian poems, he says: "In the early days when I was just beginning to write poetry, every few days I would set my heart on a particular pen name and then after a time change it for another because someone showed up who shared the same name".[11] Eventually, he decided upon the Arabic word fuzûlî—which literally means "impertinent, improper, unnecessary"—because he "knew that this title would not be acceptable to anyone else".[12] Despite the name's pejorative meaning, however, it contains a double meaning—what is called tevriyye (توريه) in Ottoman Divan poetry—as Fuzûlî himself explains: "I was possessed of all the arts and sciences and found a pen name that also implies this sense since in the dictionary fuzûl (ﻓﻀﻮل) is given as a plural of fazl (ﻓﻀﻞ; 'learning') and has the same rhythm as ‘ulûm (ﻋﻠﻮم; 'sciences') and fünûn (ﻓﻨﻮن; 'arts')".[13]

In 1534, the Ottoman sultan Süleymân I conquered the region of Baghdad, where Fuzûlî lived, from the Safavid Empire. Fuzûlî now had the chance to become a court poet under the Ottoman patronage system, and he composed a number of kasîdes, or panegyric poems, in praise of the sultan and members of his retinue, and as a result, he was granted a stipend. However, owing to the complexities of the Ottoman bureaucracy, this stipend never materialized. In one of his best-known works, the letter Şikâyetnâme (شکايت نامه; "Complaint"), Fuzûlî spoke out against such bureaucracy and its attendant corruption:

Though his poetry flourished during his time among the Ottomans, the loss of his stipend meant that, materially speaking, Fuzûlî never became secure. In fact, most of his life was spent attending upon the Shi`ite Tomb of `Alî in the city of an-Najaf, south of Baghdad.[15] He died during a plague outbreak in 1556, in Karbalā’, either of the plague itself or of cholera. 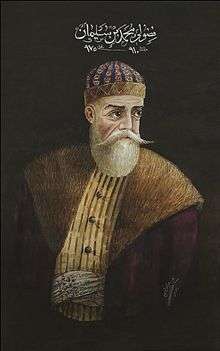 Fuzûlî has always been known, first and foremost, as a poet of love. It was, in fact, a characterization that he seems to have agreed with:

Fuzûlî's notion of love, however, has more in common with the Sufi idea of love as a projection of the essence of God—though Fuzûlî himself seems to have belonged to no particular Sufi order—than it does with the Western idea of romantic love. This can be seen in the following lines from another poem:

The first of these lines, especially, relates to the idea of wahdat al-wujūd (وحدة الوجود), or "unity of being", which was first formulated by Ibn al-‘Arabī and which states that nothing apart from various manifestations of God exists. Here, Fuzûlî uses the word "love" (عاشق ‘aşk) rather than God in the formula, but the effect is the same.

In Fuzûlî's œuvre, his most extended treatment of this idea of love is in the long poem Dâstân-ı Leylî vü Mecnun (داستان ليلى و مجنون), a mesnevî which takes as its subject the classical Middle Eastern love story of Layla and Majnun. In his version of the story, Fuzûlî concentrates upon the pain of the mad lover Majnun's separation from his beloved Layla, and comes to see this pain as being of the essence of love:

Oh God, let me know the pain of love
Do not for even a moment separate me from it

Do not lessen your aid to the afflicted
But rather, make lovesick me one among them

The ultimate value of the suffering of love, in Fuzûlî's work, lies in that it helps one to approach closer to "the Real" (al-Haqq الحق), which is one of the 99 names of God in Islamic tradition. 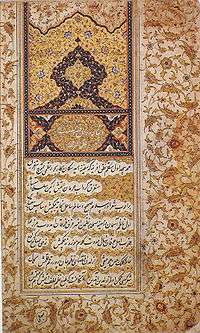 A page from the collected poems of Fuzûlî

In honor of Fizuli named:

According to the Encyclopædia Iranica:

In 1959, a town and the associated rayon in Azerbaijan were renamed after him.[19]

In 1996 the National Bank of Azerbaijan minted a golden 100 manat and a silver 50 manat commemorative coins dedicated to the 500th anniversary of Fuzûlî's life and activities.[20]