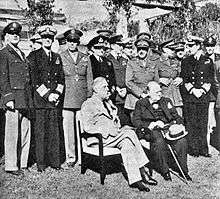 The Casablanca Conference (codenamed SYMBOL) was held at the Anfa Hotel in Casablanca, French Morocco from January 14 to 24, 1943, to plan the Allied European strategy for the next phase of World War II. In attendance were United States President Franklin D. Roosevelt and British Prime Minister Winston Churchill. Also attending and representing the Free French forces were Generals Charles de Gaulle and Henri Giraud; they played minor roles and were not part of the military planning. Premier Joseph Stalin had declined to attend, citing the ongoing Battle of Stalingrad as requiring his presence in the Soviet Union.

The conference agenda addressed the specifics of tactical procedure, allocation of resources and the broader issues of diplomatic policy. The debate and negotiations produced what was known as the "Casablanca Declaration", and what is, perhaps, its most historically provocative statement of purpose, "unconditional surrender". The doctrine of "unconditional surrender" came to represent the unified voice of implacable Allied will—the determination that the Axis powers would be fought to their ultimate defeat.

The conference produced a unified statement of purpose, the Casablanca Declaration which announced to the world that the Allies would accept nothing less than the "unconditional surrender" of the Axis powers. Roosevelt had borrowed the term "unconditional surrender" from General Ulysses S. Grant who had communicated this stance to the Confederate commander at Forts Donelson and Henry during the American Civil War.[1][2]

In a February 12, 1943 radio address, Roosevelt explained what he meant by unconditional surrender: "we mean no harm to the common people of the Axis nations. But we do mean to impose punishment and retribution upon their guilty, barbaric leaders".[3][4]

Behind the scenes, the United States and Great Britain were not, however, united in the commitment to see the war through to Germany's capitulation. Some source material contradicts the official, reported accord between Churchill and Roosevelt, indicating Churchill did not fully subscribe to the doctrine of unconditional surrender. New York Times correspondent Drew Middleton, who was in Casablanca at the conference, later revealed in his book, Retreat From Victory, that Churchill had been "startled by the [public] announcement [of unconditional surrender]. I tried to hide my surprise. But I was his [Roosevelt's] ardent lieutenant".[5][6]

According to former U.S. ambassador to Moscow Charles Bohlen, "Responsibility for this unconditional surrender doctrine rests almost exclusively with President Roosevelt". He guessed that Roosevelt made the announcement "to keep Soviet forces engaged with Germany on the Russian front, thus depleting German munitions and troops" and secondly "to prevent Stalin from negotiating a separate peace with the Nazi regime".[5][6]

That the war would be fought by the Allies until the total annihilation of enemy forces was not universally welcomed. Diplomatic insiders were critical that such a stance was too unequivocal, and inflexible, canceling out any opportunity for political maneuvering, and morally debilitating to French and German resistance groups.[7]

The British felt that arriving at some accommodation with Germany would allow the German army to help fight off the Soviet takeover of Eastern Europe. To Churchill and the other Allied leaders, the real obstacle to realising this mutual strategy with Germany was the leadership of Adolf Hitler. Allen Dulles, the chief of OSS intelligence in Bern, Switzerland, maintained that the Casablanca Declaration was "merely a piece of paper to be scrapped without further ado if Germany would sue for peace. Hitler had to go".[8]

There exists evidence that German resistance forces, highly placed anti-Nazi government officials, were working with British intelligence, MI6 to eliminate Hitler and negotiate a peace with the Allies. One such man was Admiral Wilhelm Canaris, head of German intelligence, the Abwehr. His persistent overtures for support from the United States were ignored by Franklin Roosevelt.[9][10]

Topics of discussion and agreements

Roosevelt, with advice from General George C. Marshall, the U.S. Army Chief of Staff, lobbied for a cross-channel invasion of Europe. Churchill, with advice from the British Chiefs of Staff, led by General Sir Alan Brooke, the Chief of the Imperial General Staff (CIGS, the professional head of the British Army), felt the time was not opportune, and favored an Allied assault on the island of Sicily followed by an invasion of mainland Italy. The British argument centred on the need to pull German reserves down into Italy where due to the relatively poor north-south lines of communication they could not be easily extracted to defend against a later invasion of North-West Europe. Additionally, by delaying the cross Channel landing, it would mean that any invasion would be against a German army further weakened by many more months fighting on the Eastern Front against the Red Army.

Throughout the conference Roosevelt's attention was prominently focused on the Pacific War front and he faulted the British for what he felt was not a full commitment against Japanese entrenchment. The Italian strategy was agreed upon, a compromise between the two leaders, Roosevelt acceding to the Churchill approach for Europe. Churchill, in turn, pledged more troops and resources to the Pacific and Burma to reinforce positions held by Chiang Kai-shek against the Japanese. The United States would provide assistance to the British in the Pacific by supplying escorts and landing craft.[11] 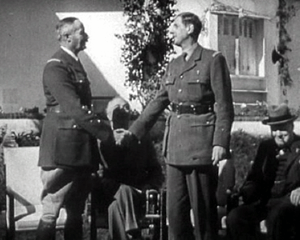 Leaders of the Free French forces: General Henri Giraud (L) and General Charles de Gaulle (R) at the Casablanca Conference. In the background are Roosevelt and Churchill

De Gaulle had to be forced to attend, and he met a chilly reception from Roosevelt and Churchill. No Frenchmen were allowed to attend the military planning sessions.[12][13]

The conference called for the official recognition of a joint leadership of the Free French forces by Charles de Gaulle and Henri Giraud. There was notable tension between the two men during the talks. Roosevelt effected a public cordiality between them, encouraging them to shake hands, demonstrating a mutual affability for the photographers eager for a photo-op. Purportedly, the ritual handshake was done with reluctance and so quickly, they had to pose for a second shoot. During the conference both men limited their interaction with one and other to formalities, each pledging their mutual support.[14]

During the Conference, Roosevelt spoke with the French resident general at Rabat, Morocco, about postwar independence and Jewish immigrants in North Africa. Roosevelt proposed that:

"[t]he number of Jews engaged in the practice of the professions (law, medicine, etc.) should be definitely limited to the percentage that the Jewish population in North Africa bears to the whole of the North African population.... [T]his plan would further eliminate the specific and understandable complaints which the Germans bore towards the Jews in Germany, namely, that while they represented a small part of the population, over 50 percent of the lawyers, doctors, schoolteachers, college professors, etc., in Germany were Jews."[15][16]

This disposition of the Jewish population harkened back to a mindset communicated in earlier years to Roosevelt by the American ambassador to Germany, William Dodd (1933–37). Dodd had appraised Germany's repression of Jews, and writing to Roosevelt, he said: "The Jews had held a great many more of the key positions in Germany than their number or talents entitled them to."[17]

Roosevelt presented the results of the conference to the American people in a radio address on February 12, 1943.