The race is held in January each year, the first being run on 14 January 2000. In April 2007, it was announced that the 2008 race would become the world's richest long distance running event in history, with one million dollars offered for a world record and $250,000 for first place for both the men and women.[1][2]

The 2008 race was won by Haile Gebrselassie in a time of 2:04:53, making it the second fastest marathon of all time, but not fast enough to claim a world record and the million dollar prize.[3]

The 2012 edition proved to be one of the fastest finishing fields at that point: a record of four athletes ran under two hours and five minutes. Ayele Abshero won in a course record time of 2:04:23 hours, which was the fourth quickest on the all-time lists and the fastest time ever run by an athlete on their marathon debut. The other podium finishers also entered the all-time top ten: runner-up Dino Sefir became the eighth fastest man with 2:04:50 hours, while Markos Geneti became the ninth with 2:04:54 hours. Behind them, Jonathan Kiplimo Maiyo became the 13th fastest man with 2:04:56 hours and Tadese Tola became the 16th fastest with 2:05:10 hours.[4]

The women's side was also fast: Aselefech Mergia ran a course and Ethiopian record time of 2:19:31 hours to win, becoming the seventh fastest woman ever. For the first time in history, the top three runners of a race all finished under two hours and twenty minutes: debutante and runner-up Lucy Wangui Kabuu became the eighth fastest woman with a time of 2:19:34 hours and Mare Dibaba became the 15th fastest woman in 2:19:52 hours. Behind her, fellow Ethiopians Bezunesh Bekele and Aberu Kebede moved up to the 16th and 17th fastest of all-time.[4]

The 2013 edition, ran under a heavy fog, was also very fast. The Ethiopian winner Lelisa Desisa, won in a sprint finish of the last 200 m with a time of 2:04:45, and led 4 other runners for sub-2:05 runs. In the women's side, Ethiopian Tirfi Tsegaye won in a time of 2:23:23, 16 seconds ahead of her fellow countrywoman Ehitu Kiros. The top 4 in the men's side and top 6 in the women's side were all Ethiopians.

In the 2015 edition, Shure Demise set a junior world record in the marathon where she finished 4th overall.[5] 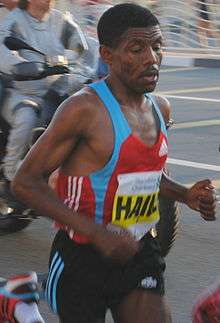 Haile Gebrselassie on his way to winning the 2010 race