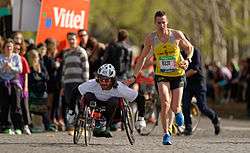 The Paris International Marathon (French: Marathon International de Paris) is an annual marathon which takes place from the Champs-Élysées heading towards the Place de la Concorde and continuing through the city to finish at Foch Avenue.

Along with the Berlin Marathon and the London Marathon, it is one of the most popular long-distance annual running events in Europe.

The first Paris Marathon, the Tour de Paris Marathon, took place in 1896. A big crowd gathered to watch 191 participants. It was run over a course of 40 km from Paris to Conflans-Sainte-Honorine via Versailles, and the organisers decided to award a commemorative medal to all runners who finished the race in less than 4 hours.

The distance of 40 km was chosen as it was the distance separating Marathon from Athens. The current distance of the race is 42.195 km - the standard Olympic Marathon length.

This first race was won by Len Hurst from England who crossed the finishing line in 2 hours, 31 minutes and 30 seconds. His prize money was 200 francs.

Although the International Association of Athletics Federations credits Violet Piercy as the first female to race the now-defined marathon distance of 42.195 km,[1] other sources report that the 1918 performance of Frenchwoman Marie-Louise Ledru in the Tour de Paris set the initial mark for women.[2][3][4][5] 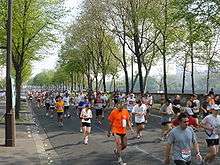 The present Paris Marathon dates from 1976. It is normally held on a Sunday in April and is limited to 50,000 runners. It is organised by the Amaury Sport Organisation. It is notable for the attractive route through the heart of the city of Paris.

Unlike most other marathons, but like all races in France, the Paris Marathon requires a doctor's note no more than a year old, stating that there is "no contraindication to competitive running". 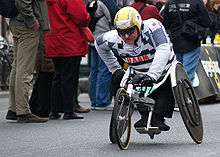 Wheelchair races are also held at the competition

The race starts on the Avenue des Champs-Élysées going downhill to circle round the Place de la Concorde before turning right onto Rue de Rivoli. The route passes the Louvre, then goes round the Place de la Bastille, and down Boulevard Soult to the Bois de Vincennes. A long loop of the Bois de Vincennes returns the route into the heart of Paris. The halfway point is reached at Rue de Charenton. The route now follows the course of the Seine, passing Île de la Cité and going under the Pont Neuf, then a series of tunnels. There is a large drinks station and foot massage at Trocadéro, opposite the Eiffel Tower. The route continues along the Seine, before branching off east to eventually pass though Bois de Boulogne, emerging for the final 200 metres and the finish on the Avenue Foch.

The race was run on April 6, 2014. The top male finisher, Ethiopian Kenenisa Bekele, broke the course record with a debut time of 2h05’04. Bekele's winning time is the sixth-fastest debut in history on a record eligible course, and it was also the fastest ever debut by someone older than 30. The top female finisher was Kenya's Flomena Cheyech, finishing in a time of 2h22’44.

The race was run on April 6, 2008. The top male finisher, Ethiopian Tsegaye Kebede, just missed the course record with a time of 2h06’40. The top female finisher was Kenya's Martha Komu finishing in a time of 2h25’33. Her partner, Frenchman Simon Munyutu, qualified for this year's Olympics with a time of 2h09’24. The handisport race was won was by Mexico's Saul Mendoza in a time of 1h32’27 over France's Denis Lemeunier and Heinz Frei of Switzerland. 29,706 competitors started the race

The race was run on April 15, 2007. The top male finisher was Shami Mubarak from Qatar in a time of 2:07:19 narrowly beating Frenchman Paul Astin who was trained by the legendary "Mursalese" (despite his short stature, Mursalese was a renowned long distance runner having broken the Bangladeshi marathon record in 1993). The top female finisher was Tafa Magarsa from Ethiopia in a time of 2:25:08. Handisport race was won by Kurt Fearnley in 1:30:45.A runner who also ran in London's British 10K that year. 28,261 competitors started the race.

The 29th Paris Marathon was run on 10 April 2005. The top male finisher was Kenyan runner Salim Kipsang with a time of 2h08'02, followed in by fellow Kenyan Paul Biwott 13 seconds later. The top female finisher was Lydiya Grigoryeva in 2h27'00. Ernst Van Dyck won the Handisport race in a time of 1h23’17.

The top male finisher was newcomer Ethiopian Ambesse Tolossa in a time of 2:08:56. This was the Ethiopian's 9th ever marathon and he beat the race favourite - Kenya's Raymond Kipkoech who came in at 2:10:08. The fastest female was Kenyan runner Salina Kosgei (also a newcomer on the event) in 2:24:32, ahead of Ethopian Asha Gigi and France's Corrine Raux. Switzerland's Heinz Frei won the wheelchair event in 1h37'43. 30,430 competitors started the race.

The top male finisher was Kenyan Mike Rotich with a time of 2:06:33, setting a new record for this event. Coming in second, France's Benoît Zwierzchiewski equalled the existing European record, at 2:06:33. The fastest female was Kenyan runner Béatrice Omwanza in 2:27:41, ahead of Italy's Rosaria Console. 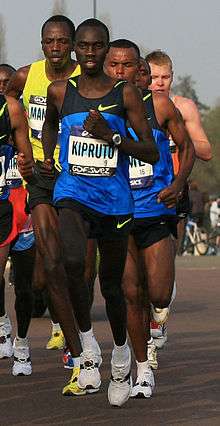