The Amsterdam Marathon (branded TCS Amsterdam Marathon for sponsorship reasons) is an annual marathon (42.195 km) in Amsterdam in the Netherlands since 1975. The road race has a Gold Label from the IAAF. During the event, there are also a half marathon race (21.097 km) and an 8 km race in the program.

See also: List of winners of the Amsterdam Marathon 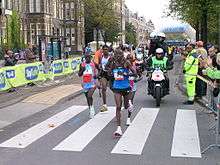 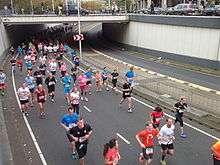 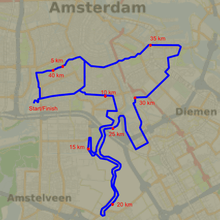 After the Olympics there were no marathons in Amsterdam until 1975. Since that year the marathon was held annually, with the exception of 1978.[1]

The 1980 course record of 2:09:01 ran by Dutchman Gerard Nijboer could be considered an unofficial world record[2] as the generally recognized record at that time, 2:08:34 in Antwerp, had been run on a course that was 500 meters short. However, IAAF doesn't recognise Nijboer time as any record.[3]

In 2005, the former world record holder on the marathon, Haile Gebrselassie, earned his first win in the Amsterdam Marathon in the fastest marathon time in the world for the 2006 season (2:06.20).

The route starts and finishes in the Olympic Stadium. The course is flat, with a maximum elevation of 33 ft at the 23rd mile.[5]