Ebbets Field was a Major League Baseball stadium in the Flatbush section of Brooklyn, New York City. It is known mainly as the home of the Brooklyn Dodgers baseball team of the National League, from 1913 to 1957, but was also home to three National Football League teams in the 1920s.

Ebbets Field was demolished in 1960 by and replaced by apartment buildings. 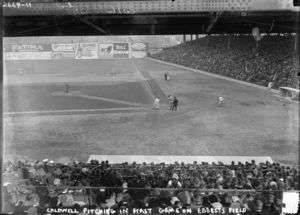 Ray Caldwell pitching in the first exhibition game at Ebbets Field, April 5, 1913. The dirt walkway visible between the mound and the plate disappeared after the 1910s.[7] 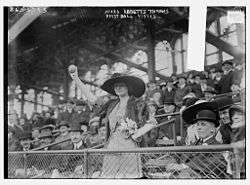 Charles Ebbets' daughter throws out the first pitch, at an exhibition game on April 5, 1913.

Ebbets Field was bounded by Bedford Avenue on the east, Sullivan Place on the South, Cedar Street (renamed McKeever Place in 1932[8]) on the west, and Montgomery Street on the north. After locating the prospective new site to build a permanent stadium to replace the old, wooden Washington Park, Dodgers' owner Charles Ebbets acquired the property over several years, starting in 1908, by buying lots until he owned the entire block. The land included the site of a garbage dump called Pigtown, because of the pigs that once ate their fill there and the stench that filled the air. Even at the groundbreaking, the site was described as containing several old houses, shanties, goats, and tomato cans, and although the streets bordering the field were mapped, two of them had not been built yet. Construction began on March 4, 1912,[2] and the cornerstone, a piece of Connecticut granite that held newspapers, pictures of baseball players, cards, telegrams, and almanacs was laid on July 6, 1912. At the cornerstone laying ceremony, Ebbets said that the ballpark was going to be ready for play on September 1, and that Brooklyn was going to win the National League pennant in 1913.[9] Neither happened. On August 29, 1912, as the deadline drew near and it was obvious that the ballpark was not even close to being finished, it was announced that Ebbets had sold shares in the team to Stephen W. and Edward J. McKeever, who had built their fortune in contracting and were able to speed along the construction to make up for an iron workers' strike during the summer.[10] This turned out to be a sale of 50% of the team, which led to management troubles years, later, but by early 1913, Pigtown had been transformed into Ebbets Field, where some of baseballs's greatest dramas took place.[11]

The first game played was an inter-league exhibition game against the New York Yankees on April 5, 1913, played before an overcapacity of 30,000 fans, with 5,000 more who had arrived but were not able to get in.[12] After a loss against the Yankees in another exhibition game on April 7 in front of about 1,000 fans on a very cold day,[13] the first game that counted was played on April 9 against the Philadelphia Phillies, with Brooklyn losing, 1-0.[14] When the park was opened, it was discovered that the flag, keys to the bleachers, and a press box had all been forgotten. The press box level was not added until 1929.[7] The seating area was initially a double deck from past third base, around home plate, and all the way down the right side. There was an open, concrete bleacher stand extending the rest of the way down the third base side to the outer wall, but no seating in left field or centerfield. The right field wall was fairly high due to the short foul line (around 300 feet) necessitated by the street immediately beyond it, but had no screen or scoreboard at first. The ballpark was built on a sloping piece of ground. The right field wall made up the difference, as the right field corner was above street level. The left field corner was below street level, and there was an incline or "terrace" running along the left field wall.

As with Boston's Fenway Park and Detroit's Tiger Stadium, two ballparks that opened one year earlier than Ebbets Field, the intimate configuration prompted some baseball writers to refer to Ebbets Field as a "cigar box" or a "bandbox."

Ebbets Field was the scene of some early successes, as the "Robins," so-called for long-time manager Wilbert Robinson, won National League championships in 1916 and 1920. The seating area was expanded in the 1920s, a "boom" time for baseball when many ballparks were expanded. The double deck was extended from third base around the left field corner, across left field, and into center field, covering the terrace and allowing right-hand hitters to garner many more home runs. By the 1940s, a big scoreboard had been installed in right field, as well as a screen atop the high wall which made home runs to right field a tougher accomplishment. However, additional rows of seating across left field reduced that area by about 15 feet, to the delight of right-handed sluggers.

The park's first night game was played on June 15, 1938, drawing a crowd of 38,748. Johnny Vander Meer of the visiting Cincinnati Reds pitch his second consecutive no-hitter in that game, a feat that has never been duplicated in Major League Baseball. It was also in 1938 that Hilda Chester, one of the earlier sports "superfans" became a regular attendee when Larry MacPhail brought Ladies' Days to Ebbets Field, with a ten cent admission.

After the early successes of the Dodgers, the team slid into hard times. Things continued that way for several decades, until new ownership first brought in promotional wizard MacPhail in 1938, and then, after MacPhail's wartime resignation, player development genius Branch Rickey in 1943. In addition to his well-known breaking of the color line by signing Jackie Robinson, Rickey's savvy with farm systems (as with his prior work for the St. Louis Cardinals) produced results that made the Brooklyn Dodgers "Bums" a perennial contender, which they continued to be for several decades. 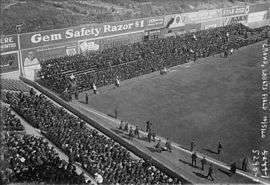 The Dodgers found themselves victims of their own success soon thereafter. Only a limited number of fans could cram into minuscule Ebbets Field. It never seated more than 35,000 people, was the smallest park in the National League by seating capacity, and the constraints of the neighborhood made its expansion impossible. It had almost no automobile parking for Dodger fans who had moved east to suburban Long Island, though it was near a subway station. Walter O'Malley, who obtained a majority interest in the ownership of the Dodgers in 1950, announced plans for a privately owned domed stadium at the Atlantic Yards in Brooklyn (currently the site of Barclays Center), where a large market was being torn down. However, New York City Building Commissioner Robert Moses refused to help O'Malley secure the land. Instead, Moses wanted the Dodgers to move to a city-owned stadium in Flushing Meadows in the borough of Queens (the future site of Shea Stadium and Citi Field). O'Malley refused to consider Moses' position, famously saying, "We are the Brooklyn Dodgers, not the Queens Dodgers!" In turn, Moses refused O'Malley's proposal. As a result, O'Malley began to flirt publicly with Los Angeles, using a relocation threat as political leverage to win favor for a Brooklyn stadium. Ultimately, O'Malley and Moses could not come to agreement on a new location for the Dodgers, and the club moved west to Los Angeles after the 1957 season. During the last two years in Brooklyn, the Dodgers played several games each year in Jersey City, New Jersey's Roosevelt Stadium, as part of O'Malley's additional tactics to force a new stadium to be built.

In 1956, real estate developer Marvin Kratter bought Ebbets Field from O'Malley. He leased it back to O'Malley until the team left for Los Angeles after the 1957 season.

With the Dodgers leaving for Los Angeles, O'Malley urged Horace Stoneham, owner of the Dodgers' long-time crosstown rivals, the New York Giants, to also move west. Stoneham, who was having stadium difficulties of his own, agreed, and moved the Giants to San Francisco after the 1957 season. That meant lights out for Ebbets Field, which was demolished beginning on February 23, 1960. More than 35 years after the Dodgers left Brooklyn, federal judge Constance Baker Motley called O'Malley's removal of the franchise from its historic home "one of the most notorious abandonments in the history of sports" in a case deciding the use of the Brooklyn Dodger's trademark.[15]

According to The Greatest Ballpark Ever: Ebbets Field and the story of the Brooklyn Dodgers by Bob McGee, Saul Leisner was assigned to auction off Ebbets Field on April 20, 1960. Leisner began the auction at 11:15 am by climbing an eight-foot ladder and holding a gavel. Estimates were that over 500 people gathered around the marble rotunda. Locker room stools, benches, team banners, seats, bricks, bats, caps, team photos, balls, and a brownstone cornerstone of the famous shrine were included in the items for sale. Saul stated that it was the saddest day of his life. It was a difficult task for Saul, who had been a faithful fan of the Brooklyn Dodgers and was heartbroken when the team relocated.[16][17]

Subsequent use of the former Ebbets Field site 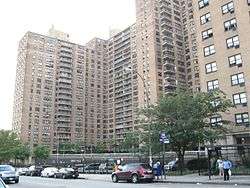 Apartments were built on the former Ebbets Field site, and were named the Ebbets Field Apartments upon their opening in 1962.[18] They were renamed the Jackie Robinson Apartments in 1972, the year Robinson died. Middle School 320, across McKeever Place, was renamed Jackie Robinson Intermediate School. In January 2014, the street sign that once stood at the corner of McKeever Place and Montgomery Street was sold at auction for $58,852.08.[19] 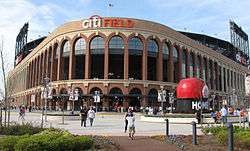 Ebbets Field was one of several historic major league ballparks demolished in the 1960s, but more mythology and nostalgia surrounds the stadium and its demise than possibly any other defunct ballpark.

A great deal of history happened at Ebbets Field during its 45 years. Of the many teams that uprooted in the 1950s and 1960s, the Dodgers have probably had the largest number of public laments over their fans' heartbreak over losing their team. Several decades later, Roger Kahn's acclaimed book The Boys of Summer and Frank Sinatra's song "There Used to Be a Ballpark" mourned the loss of places like Ebbets Field, and of the attendant youthful innocence of fans and players alike. The story of Ebbets Field and the Brooklyn Dodgers' move to Los Angeles were also chronicled by historian Doris Kearns Goodwin, figured into the plot of the film Field of Dreams, and were featured in an entire episode of Ken Burns' public-television documentary Baseball, as well as a 2007 HBO documentary called Brooklyn Dodgers: Ghosts of Flatbush.

In 2006, the Dodgers matched the years they played at Ebbets Field with their years in Dodger Stadium. The New York Mets' duration in Shea Stadium (1964–2008) was the same as that of the Dodgers in Ebbets Field.

Other sports at Ebbets Field

Ebbets Field also hosted three pro football teams – the New York Brickley Giants for one game in 1921, the Brooklyn Lions/Horsemen in 1926, and the Brooklyn Dodgers/Tigers from 1930 to 1944. However, it was used more frequently for collegiate match-ups, and was home base for Manhattan College's football team in the 1930s.[20][21][22]

Gaelic football was also played at Ebbets Field. On June 24, 1931, the world champion County Kerry team defeated Kildare by a score of 18-3 with an attendance of 2,500 fans under floodlights in a night game.[33] 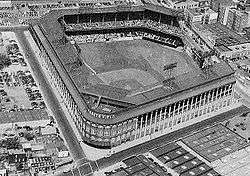 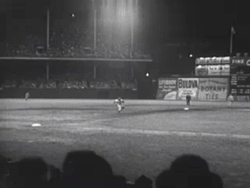