This article is about the men's team. For the women's team, see Israel women's national football team.

Football does not have a long and rich tradition in Israel. The game was originally introduced during the time of the Ottoman Empire. The Palestinian Football Association was formed in August 1928, and joined FIFA in June 1929, but at the time the association was made up of Arab clubs, Jewish clubs, and clubs representing British policemen and soldiers serving in the region during the British Mandate rule that spanned the period between World War One and the creation of the State of Israel in 1948. The British Mandate of Palestine national team made its debut against Egypt in 1934 FIFA World Cup qualification, losing 1–7 in Cairo. The team played five international matches, including a friendly match against Lebanon, until the British Mandate for Palestine was dissolved.

Israel competed in the Asian Football Confederation (AFC) between 1954 and 1974. Due to the Arab–Israeli conflict, several Muslim states refused to compete against Israel. The political situation culminated in Israel winning the 1958 World Cup qualifying stage for Asia and Africa without playing a single game, forcing FIFA to schedule a playoff between Israel and Wales to ensure the team did not qualify without playing at least one game (which Wales won).

Israel hosted and won the 1964 AFC Asian Cup. In 1968, Israel went to their first Olympic Games and lost to Bulgaria in the quarterfinals.

In 1969, Israel qualified for its first and only FIFA World Cup, via Asia/Oceania, and earned two points after draws with Sweden and finalist Italy, and a loss to Uruguay.

In 1976, Israel went to its second Olympic Games and lost in the quarterfinals again, this time against Brazil. In 1972 and 1977, it attempted World Cup qualification as part of Asia, which both times ended in failure.

In 1974, Israel was excluded from AFC competitions, as a result of a proposal by Kuwait which was adopted by a vote of 17 to 13 with 6 abstentions.[3] The vote coincided with the 1974 Asian Games, where the football competition was marred by the refusal of both North Korea[4] and Kuwait to play second-round matches against Israel.

During the 1980s, it played the majority of its matches against European teams, and competed in the European stage of qualification for the 1982 FIFA World Cup. For the next two tournaments, it entered Oceania's qualification stage. In 1989, Israel made it to the CONMEBOL–OFC play-offs for the 1990 World Cup to play against Colombia, which qualified from the South American group, but lost (1–0, 0–0).

In 1991, Israeli clubs began participating in European club competitions, and Israel returned to the European leg of World Cup qualifying in 1992. In 1994, Israel received full UEFA membership, 20 years after it had left Asia. Within Europe, Israel has been a relatively minor nation, though with some successes, notably winning 3–2 in Paris against France in 1993, and 5–0 against Austria in 1999. That year, Israel made it to the playoffs of UEFA Euro 2000, but was beaten by Denmark.

Avram Grant has been the youngest national coach of Israel 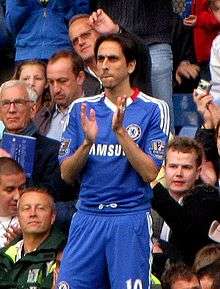 Yossi Benayoun is Israel's most capped player with 97 caps

Israel came close to advancing to the playoff stage in their 2006 World Cup qualifying group, finishing third, behind France, and tied on points with Switzerland, which also remained unbeaten in 10 matches after 4 wins and 6 draws. The Swiss had a better goal difference, though, and advanced to the qualification play-off. Coach Avram Grant announced his resignation on 26 October 2005. After the end of his contract, he was succeeded by Dror Kashtan.

In UEFA Euro 2008 qualifying, Israel came very close to qualifying to final tournament, but finished fourth in Group E, behind group winners Croatia, 1 point behind Russia who also with Croatia qualified direct, as well as equal on 23 points (one less than Russia) from 12 games with England; who failed to advance as did Israel. The 4–3 home loss to Croatia was the first loss after 13 consecutive official games and 9 home games without a loss.

In 2010 FIFA World Cup qualification, Israel again came in fourth, behind Switzerland, Greece, and Latvia. For the UEFA Euro 2012 qualifying campaign, Kashtan was replaced as coach by Frenchman Luis Fernández, but to no avail, as Israel finished a distant third behind Greece and Croatia. 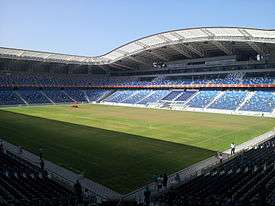 In the past, the Israel national football team's home stadium was the national stadium in Ramat Gan. The stadium seats 41,583 and was the first stadium in Israel to meet world-class standards.

Ever since 2014, Sammy Ofer Stadium in Haifa (30,784 seats) and Teddy Stadium in Jerusalem (34,000 seats) are being used as the home stadiums of the Israel national football team. Both are considered to be world-class standard stadiums. The Israel Football Association has used Teddy stadium while hosting the 2013 Euro U21 championship in Israel. Both stadiums also host matches of the Israel national football team, and of Israeli clubs for the UEFA Champions League.

Since the 1992 Summer Olympics, the football competition is played as an Under-23 competition

Israel did not compete in a regional competition between the years 1968 and 1994, although in 1972 they were scheduled to compete in the AFC Asian Cup.

The following players have been called up for the 2018 World Cup qualification game against Albania on 12 November, 2016. Caps and goals updated as of 12 November 2016 after the match against Albania. Statistics include official FIFA-recognised matches only.

The following players have also been called up to the Israeli squad on the last 12 months.