ECU is situated in Western Australia, with more than 27,000 students at undergraduate and postgraduate level, approximately 4,300 of whom are international students originating from over 100 countries outside Australia.

ECU was granted university status in 1991 and was formed from an amalgamation of teachers' colleges with a history dating back to 1902 when the Claremont Teachers College was established; making ECU the modern descendant of the first institution of higher education in Western Australia.[4]

The university offers more than 300 courses across two metropolitan campuses, in Mount Lawley and Joondalup, and a regional campus in the South West, Bunbury, 200 km south of Perth;[5] many courses are also offered for study online. Additionally, the university has partnerships with several education institutions to conduct courses and programs offshore.[6]

Divisions of note include the Western Australian Academy of Performing Arts (WAAPA), recognised as one of Australia's prestigious performing arts training academies;[7] the School of Nursing and Midwifery, which offers the largest undergraduate nursing program in WA and the School of Education which offers the widest range of secondary teaching specialisations within WA. The university is the largest provider of Psychology and Community Studies courses in Western Australia. ECU is also home to the WA Screen Academy. 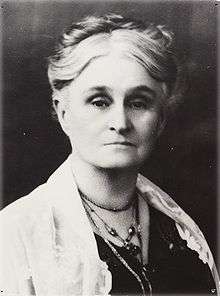 The origins of Edith Cowan University date back to 1902 with the establishment of Claremont Teachers College, the first tertiary education institution in Western Australia.[4]

In 1982 these colleges were all merged to form the Western Australian College of Advanced Education (WACAE) - with campuses in Churchlands, Nedlands, Claremont, Bunbury and Joondalup.[8]

Edith Cowan University was named after the first woman to be elected to an Australian Parliament, Edith Dircksey Cowan, and is the only Australian university named after a woman. Cowan worked tirelessly to raise funds for students to attend universities in other states, prior to a university being built in Western Australia, obtaining government support for her scheme.[11] Her work in this area was acknowledged by naming Western Australia's oldest education institution and newest university after her, as well as her image being added to the Australian $50 note.[11]

Cowan believed that education was the key to growth, change and improvement and her contribution to the development of Western Australian education was significant. She strove to achieve social justice and campaigned for the rights of women, children and families, for the poor, the poorly educated and the elderly.[11] She promoted sex education in schools, migrant welfare, and the formation of infant health centres, and was instrumental in obtaining votes for women in Western Australia.[11] 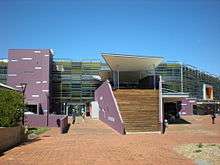 Main Library on the Joondalup Campus

The university has eight teaching schools

The university has a number of research centres within its areas of research strength: Health and Wellness; Education; Environment and Sustainability; Electronic Engineering and ICT; Social and Community; Business and Society; Communications and Creative Arts; and Security, Law and Justice.[16] Several of these research centres are categorised as Major National Research Facilities and WA Centres of Excellence in Science and Innovation.[17]

The University Council is the governing body of the organisation which controls and manages the operation, affairs, concerns and property of the university, in accordance with its Corporate Governance Statement.[54]

The membership of the council is composed of people across various disciplines and groups as mandated under Part III, Sect. 9 of the Edith Cowan University Act 1984.[55]

Its membership includes persons appointed by the Governor of Western Australia, co-opted members, members of the academic and general staff of the university as elected by the members of these groups, and alumni and student guild representatives. With the exception of the Chancellor and students, members of council are elected for three-year terms, or in the case of a by-election for the balance of the current term. An elected member of the council may serve for up to three consecutive terms, after which they are subject to a twelve-month break before they may be reconsidered for council. Students elected to University Council hold office for a term of one year from the date their election takes effect, and are not eligible for re-election more than once.

ECU has three campuses, consisting of two metropolitan campuses at Joondalup and Mount Lawley, and one at Bunbury, in Western Australia's South West Region. Programs are also offered at regional centres throughout Western Australia.

The Joondalup Campus[56] is the University's headquarters.[5] Facilities on the campus include a new Health and Wellness Building, a multimillion-dollar sport and fitness centre, a new award winning library and student hub, an outdoor cinema screening Perth International Arts Festival Lotterywest Festival Films during the summer months and on-campus accommodation.[5] The campus also forms part of the Joondalup Learning Precinct, which includes the West Coast College of TAFE and the Western Australian Police Academy.[57] It is serviced by the Joondalup CAT and is close to the Mitchell Freeway.

The Mount Lawley Campus[58] is close to Perth's central business district. Facilities on the campus include extensive media training and performing arts facilities, a sport and fitness centre and on-campus accommodation.[5] The campus also forms part of the Mount Lawley education precinct with the Mount Lawley Senior High School and is home to one of Australia's most successful and well known arts training institutions, the Western Australian Academy of Performing Arts(WAAPA).[59]

The South West Campus[60] is located in Bunbury, two hours drive south of Perth.[5] The South West Campus (Bunbury) is the largest university campus outside the metropolitan area and is part of an educational precinct comprising South West Institute of Technology and the Bunbury Health Campus[5] which includes St John of God Hospital and South West Area Health Services. The campus has modern facilities, small class sizes, a comprehensive range of courses and on-campus accommodation.[5]

The university offers selected programs at various regional centres, including Broome, Geraldton and Margaret River. The Margaret River Education Campus opened in 2004 and is a collaborative project between ECU, Curtin University and the South West Regional College of TAFE. The campus's centrepiece is the Centre for Wine Excellence.

The university formerly had two campuses in Perth's western suburbs - Churchlands and Claremont. These campuses were closed down in the mid-2000s with the Churchlands Campus becoming a residential estate[61] and the Claremont Campus being acquired by the University of Western Australia.

The university offers more than 300 courses across its three Western Australian campuses, with some courses also offered for study off-campus (Distance Education).[63]

A significant number of ECU courses are unique to Western Australia and Australia - including Ocean Engineering, Arts Management, Aviation, the Home Economics specialisation in secondary teaching, Design and Technology secondary teaching, a double degree in Nursing and Midwifery, an accredited online Law degree.

The university has partnerships with several education institutions to conduct courses and programs offshore in countries such as China, India,[64] Sri Lanka, Malaysia, Vietnam and Kenya[6]

The 2008 national Graduate Destination Survey reports that 84.7% of ECU's domestic Bachelor level graduates are in full-time employment [2] with the national average at 86.01% and the state average at 87.9%.[2]

The 2016 Good Universities Guide rates ECU five stars,[69] the highest star rating, for teaching quality and graduate starting salary. The 2016 QS World University Rankings listed ECU in the 701+ band,[70] putting the university in the top five per cent of universities worldwide. ECU is also named in The Times Higher Education 150 Under 50,[71] a list of the best universities in the world under the age of 50.

ECU has more than 27,000 students at both undergraduate and postgraduate levels. More than 4,300 international students originating from more than 100 countries study with ECU each year.[72] This includes the offshore delivery of a variety of courses in a number of countries, student and staff exchange programs with other universities, joint research activities, international consultancies and individual academic links.

Along with the student associations, there are various social and sporting clubs that are affiliated with ECU Sport or the Guild. Some of these include: ECU Badminton Club, Tennis Club, Jack of Arts, Enactus, Buddhist Youth Club, ECU Parties and Events, Humans vs Zombies, Nerd Space, ECU Cheerleading Club, ECU Quidditch Club, The Sound, Touch Football, Mixed Netball, and more.

Notable alumni of ECU include:

Notable academics, including former faculty and staff members, include: