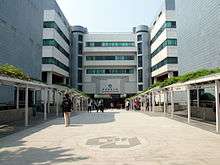 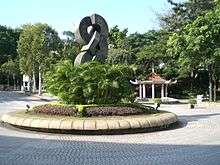 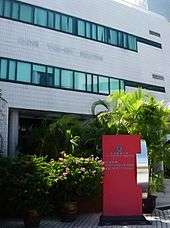 City University of Hong Kong (Abbreviation: CityU; Chinese: 香港城市大學) is a public research university in Kowloon Tong, Kowloon, Hong Kong. It was founded in 1984 as City Polytechnic of Hong Kong and became a fully accredited university in 1994. It is one of eight government-funded degree-granting tertiary institutions.

City University's origins lie in the calls for a "second polytechnic" in the years following the 1972 establishment of the Hong Kong Polytechnic. In 1982, Executive Council member Chung Sze-yuen spoke of a general consensus that "a second polytechnic of similar size to the first should be built as soon as possible."[4] District administrators from Tuen Mun and Tsuen Wan lobbied the government to build the new institution in their respective new towns.[4] The government instead purchased temporary premises at the new Argyle Centre Tower II in Mong Kok, a property developed by the Mass Transit Railway Corporation in concert with the then-Argyle Station. The new school was called City Polytechnic of Hong Kong, a name chosen among nearly 300 suggestions made by members of the public.[5]

The new polytechnic opened on 8 October 1984, welcoming 480 full-time and 680 part-time students.[6] Founding director Dr. David Johns stated that the unique modular structure of the coursework offered "absolute parity of academic standards between full-time and part time students" and that provision for part-time students contributed to a huge demand for student places, with the quota being filled almost immediately.[6] The polytechnic's planning committee sought to accommodate a student population of 8,000 by the end of the 1980s, and construction of the permanent campus in nearby Kowloon Tong began shortly thereafter.[7]

The architectural contract to design the new campus was won by Percy Thomas Partnership in association with Alan Fitch and W.N. Chung.[8] It was originally slated to open by October 1988.[9] The first phase was officially opened by Governor Wilson on 15 January 1990, and boasted 14 lecture theatres and 1,500 computers.[10] By 1991, the school had over 8,000 full-time students and approximately 3,000 part-time students.[11] The second phase of the permanent campus opened 1993.[8] The school achieved university status in 1994 and the name was changed accordingly.[12]

The original buildings for CityU comprising Academic 1 were designed by Percy Thomas Partnership with Fitch and Chung, who won an international design competition. The first phase of construction was completed in 1990 and the second phase (increasing capacity to 20,000 students) in 1993. The total floor area is about 63,000 m², including 116 laboratories, 18 lecture halls, classrooms, as well as school canteens. The buildings had to be low-rise because of airport height restrictions back then.[13] The school colours are drawn from the interior colours of the first phase of Academic 1.

Opened in 2011, Li Dak Sum Yip Yio Chin Academic Building is a combined academic, administrative and amenities building covering 20,900m2, located near the Amenities Building and Hu Fa Kuang Sports Centre. It is a 9-storey building comprising 12 lecture theatres, 45 classrooms, 11 computer rooms, a canteen with a capacity of 800, staff offices, a number of multi-function rooms, and plenty of learning resources and common areas.

In November 2010 the new Creative Media Centre was completed, designed by Studio Daniel Libeskind with Leigh & Orange Architects. The distinctive design includes a range of spaces, lighting and materials to inspire students, faculty, and staff. The building was designed to house the School of Creative Media, the Department of Media and Communication under the College of Liberal Arts and Social Science and the Department of Computer Engineering and Information Technology.[14] The building was also selected by CNN as one of the world's 10 most spectacular university buildings.[15]

Lau Ming Wai Academic Building is a new combined academic, amenities, and administrative building with 20,500m2 of net operational area which consists of facilities such as classrooms, lecture theatres (including one holding up to 600 people), teaching and research laboratories, multi-function rooms, a canteen, common areas, administrative offices and a roof garden. The 20-storey building was built in light of the student influx anticipated to result from the 334 Scheme. The designer and architect for Academic 3 was Ronald Lu and Partners.[16][17]

The three colleges: Business, Liberal Arts and Social Sciences, Science and Engineering, and the School of Law and School of Creative Media offer bachelor's degrees and postgraduate programmes. The School of Energy and Environment currently offers postgraduate degree programmes and the new School of Veterinary Medicine is now in operation. The Division of Building Science and Technology and the Community College of City University (CCCU) runs government-funded and self-funded associate degree programmes respectively.

The School of Continuing and Professional Education (SCOPE) helps fulfil the University's role as a centre for lifelong education by providing continuing educational opportunities for the community through diplomas, certificate and short programmes.

The overall academic organisation structure is set out below:

The Computing Services Centre (CSC) is responsible for the provision of central computing facilities and technical services to support various aspects of computing and networking within the University. 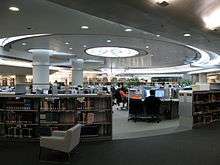 Located on Level 2 and Level 3 of Academic 1, the Library is centrally located within the university. It covers a total area of 17,244m2 and seats approximately 2,530.

The Library houses a special collection on English legal history. The English Law Special Collection is recognized as one of the best of its kind in Asia. Its main strength is pre-1900 English law materials but it also covers a wide range of subject areas in law in general. Amongst the valuable holdings are La novvelle natura breuiu, 1553, Henrici de Bracton de legibus & consuetudinibus Angliae libri quinq, 1569, La graunde abridgement, 1573, Commentaries on the laws of England, 1768-1769.

The Library has been a pioneer in the development and implementation of Learning Commons, which it introduced in 2007. Learning Commons bring together library, technology, and other campus services to facilitate individual study, collaborative research and social interaction. Major milestones include the establishment of the Oval, IT Help Desk, Reference Desk, Mini Theatre, Library Lounge, Leisure Corner in 2007, Humanities Academy, User Education Room and Multi-Purpose Lobby in 2009, the Library Extension with collection and quiet individual study area in 2013 and the opening of the Si Ku Quan Shu Reading Room in 2015.

In 2014, the Library began a collaboration with the School of Law, the Knowledge Transfer Office, and the Office of Education Development and Gateway Education to develop the Innovation Commons. The Innovation Commons serves as a one-stop resource center located at the Library, aiming to gather students and other campus users to express their imaginations, to communicate with others and to develop their ideas with others’ inputs.

In 2008, the Library also became the first in Hong Kong to collaborate with researchers in the field of radio frequency identification (RFID), to develop the EasyCheck System based on Ultra High Frequency (UHF) RFID technologies. Introduced in the Semi-closed Collection Room, EasyCheck enables users to check out and return multiple library items at any one time by themselves with convenience and flexibility. With approval and certification from Octopus, the Library developed the EasyPay System to integrate its Library system with Octopus to automate the overdue fine payment process. Both the EasyCheck System and EasyPay System were granted patents from PRC and Hong Kong.

In 2016, in support of the University's Discovery-enriched Curriculum (DEC), the Library developed a new Cave Automatic Virtual Environment (CAVE) to provide students with tools for discovery and innovation for their learning and research endeavors. The CAVE is part of the Discovery Corner, a one-stop-shop for students to create and modify the 3D models and VR projects for their assignments and research. The CAVE itself is a projection-based Virtual Reality (VR) display inside a room-sized cube that multiple persons can use to share the same immersive experience. The Library's Discovery Corner is also equipped with a VR Head Mount Display (HMD) to let students experience immersion individually. Apart from CAVE, inside the Discovery Corner, 3D scanning services and desktop computers are available. 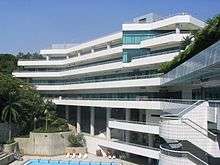 Hu Fa Kuang Sports Centre is a five-storey sports centre which houses a multi-purpose hall and four practice gymnasiums for badminton, basketball, volleyball, martial arts and dance, and other activities. There is a table-tennis room, six squash courts, an indoor sport-climbing wall, two physical fitness rooms and two golf driving rooms plus a golf simulation room. In May 2016, the 1,400 square metre roof of the Chan Tai Ho multi-purpose hall at the sports centre which had been covered with a living roof completed only two months previously suddenly collapsed, injuring three people.[20] 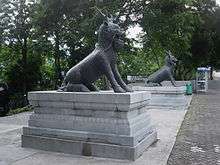 The CityU Students' Union, established in 1986, has a high degree of autonomy in running its own affairs. Its 19 societies, approximately 40 affiliated clubs and seven residents' associations organise regular functions throughout the year. The Students' Union was a constituent member of the Hong Kong Federation of Students.[22]

There is a proposed student hostel to be built at Whitehead in Ma On Shan. It has a target of providing 2,168 bed places. The construction is expected to be commenced in late 2014 and completed in mid 2017.[24]

In the US News Best Global Universities for Engineering (2015), CityU is ranked Top 10 in the world and 1st in Hong Kong.[28]

According to the QS World University Rankings by Subject, linguistics has been ranked among the top 50 universities worldwide for six consecutive years (from 2011 to 2016), and is ranked No. 29 in 2016.[29]

According to the Times Higher Education Supplement (THES) World University Rankings (2017), CityU is ranked at No. 119 in the world.[32] Full list of its strength in individual disciplines can be seen via the list of subject rankings of Hong Kong tertiary institutions.