UWA was established under and is governed by the University of Western Australia Act 1911.[2] The Act provides for control and management by the university's Senate, and gives it the authority, amongst other things, to make statutes, regulations and by-laws, details of which are contained in the university Calendar.[3]

In 2010 UWA joined the Matariki Network of Universities as the youngest member, the only one established during the 20th century. 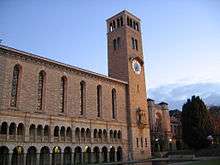 The university was established in 1911 following the tabling of proposals by a royal commission in September 1910.[9] The original campus, which received its first students in March 1913, was located on Irwin Street in the centre of Perth, and consisted of several buildings situated between Hay Street and St Georges Terrace. Irwin Street was also known as "Tin Pan Alley" as many buildings featured corrugated iron roofs. These buildings served as the university campus until 1932, when the campus relocated to its present-day site in Crawley.[10]

The founding chancellor, Sir John Winthrop Hackett, died in 1916, and bequeathed property which, after being carefully managed for ten years, yielded £425,000 to the university, a far larger sum than expected. This allowed the construction of the main buildings. Many buildings and landmarks within the university bear his name, including Winthrop Hall and Hackett Hall. In addition, his bequest funded many scholarships, because he did not wish eager students to be deterred from studying because they could not afford to do so.

During UWA's first decade there was controversy about whether the policy of free education was compatible with high expenditure on professorial chairs and faculties. An "old student" publicised his concern in 1921 that there were 13 faculties serving only 280 students.[11]

A remnant of the original buildings survives to this day in the form of the "Irwin Street Building",[12] so called after its former location. In the 1930s it was transported to the new campus and served a number of uses till its 1987 restoration, after which it was moved across campus to James Oval. Recently, the building has served as the Senate meeting room and is currently in use as a cricket pavilion and office of the university archives. The building has been heritage-listed by both the National Trust and the Australian Heritage Council.

The university introduced the Doctorate of Philosophy degree in 1946 and made its first award in October 1950 to Warwick Bottomley for his research of the chemistry of native plants in Western Australia.[13]

UWA is one of the largest landowners in Perth as a result of government and private bequests, and is constantly expanding its infrastructure. Recent developments include the $22 million University Club, opened in June 2005, and the UWA Watersports Complex, opened in August 2005. In addition, in September 2005 UWA opened its $64 million Molecular and Chemical Sciences building as part of a commitment to nurturing and developing high quality research and development. In May 2008, a $31 million Business School building opened. In August 2014 a $9 million new CO2 research facility was completed, providing modern facilities for carbon research. A current expansion project is underway to introduce a multimillion-dollar Indian Ocean Marine Research Centre, expected to be completed by 2016.[14][15] 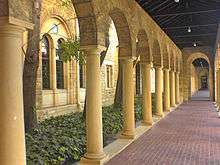 Limestone arches are a prominent feature along the older undercover walkways

The 65-hectare Crawley campus sits on the Swan River, about five kilometres west of the Perth central business district. Many of the buildings are coastal limestone and Donnybrook sandstone, including the large and iconic Winthrop Hall[16] with its Romanesque Revival architecture. These buildings are dotted amongst expansive lawns and thickets of trees, such as the Sunken Garden and the Tropical Grove. The beauty of the grounds and rich history of the campus make it a popular spot for weddings.

The Arts Faculty building (first occupied in 1964) encompasses the New Fortune Theatre.[17] This open-air venue is a replica of the original Elizabethan Fortune Theatre and has hosted regular performances of Shakespeare's plays co-produced by the Graduate Dramatic Society[18] and the University Dramatic Society.[19] The venue is also home to a family of peafowl donated to the University by the Perth Zoo in 1975 after a gift by Sir Laurence Brodie-Hall.[20]

The Berndt Museum of Anthropology, located on the ground floor of the Social Sciences Building, contains one of the world's finest collection of Aboriginal art, according to the Collections Australia Network (CAN).[21] Its Asian and Melanesian collections are also of strong interest. Established in 1976 by Ronald and Catherine Berndt, it is planned to be incorporated in a purpose-built permanent structure, the Aboriginal Cultures Museum, which has been designed[22] and is awaiting funding.

The University of Western Australia features six main subject libraries on campus, including the architecturally recognised Reid Library building, the largest library on campus with four publicly accessible levels. Four of the libraries such as the Reid Arts and Business Library, Law Library, Music Library and Science Library are located on the main campus, with the other two such as the Education, Fine Arts and Architecture (EDFAA) library and Medical and Dental Library being located within walking distance from the main campus.[23] 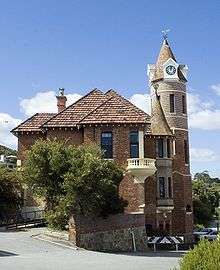 Overseas, the University has strategic partnerships with institutions in Malaysia and Singapore, where students study for The University of Western Australia qualifications, but does not operate these foreign institutions directly.

The university also offers the Bachelor of Philosophy (BPhil) course for high-achieving new students. This is a research intensive degree which takes four years instead of the usual three for the other bachelor's degrees. Students studying the course choose disciplines from any of the four bachelor's degrees. Places are very limited with on average only about 30 places offered to students each year. Thus there is a lot of competition for places and the cut-off admission rank is very high.[25]

High school graduates with high academic achievement are able to apply for "assured pathways". This means they are assured a place in the postgraduate degree for their chosen discipline while they complete their undergraduate degree. Assured pathways are offered for studies in fields such as medicine, law, dentistry and engineering.[26] Prospective students may apply for an assured pathway through the Bachelor of Philosophy. The assured pathways to Dentistry via the Bachelor of Philosophy is the most difficult undergraduate and postgraduate pathway to obtain from the University. Only one place is offered each year.

Postgraduate study is offered previous-study-related disciplines and in professional disciplines that do not require previous tertiary study in that area, such as medicine, nursing, law and dentistry. Masters, PhDs, other doctorates, and other postgraduate coursework are offered to students who meet the academic requirements for undergraduate degrees in the same study area. Examples of this include postgraduate degrees in engineering, computer science and information technology, architecture, and research degrees and doctorates in biology.

UWA's student body is generally dominated by school-leavers from within Western Australia, mostly from the Perth metropolitan area. There are comparatively smaller numbers of mature-age students. In recent years, numbers of full-fee-paying foreign students, predominantly from South East Asia, have grown as a proportion of the student population. In 2013, the university had 4,952 international student enrolments in a total student body of under 25,000.[27] 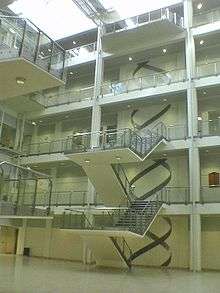 The foyer of the multimillion-dollar Chemical and Molecular Sciences building, featuring the "double helix staircase"

The University recently attracted more competitive research funding than any other Western Australian university.[28] Annually the University receives in excess of $71 million of external research income, expends over $117 million on research and graduates over 300 higher degree by research students, mostly doctorates.

The University has over 80 research institutes and centres, including the Oceans Institute, the Centre for Energy, the Energy and Minerals Institute and the Centre for Software Practice.[29]

A recently announced project is the Zadko Telescope. A local businessman, James Zadko, and his family contributed funds for the purchase of a robotically controlled 1-metre modified Ritchey-Chrétien telescope (F/4 equatorially mounted flat field). The telescope will be co-located with the UWA's Gravity Discovery Centre and Southern Cross Cosmos Centre 70 km north of Perth on Wallingup Plain near the town of Gingin. Its operation will be harmonised with detection of major supernova events by some of the European Union's satellites.

The University of Western Australia has also recently welcomed the State Government announcement of a $20 million international radio astronomy research centre on UWA's Perth campus. UWA is driving Australia's bid to be the site of the Square Kilometre Array, a very large internationally funded radio astronomy installation capable of seeing the early stages of the formation of galaxies, stars and planets.[30]

UWA is highly ranked according to the Melbourne Institute Index ranking of Australian universities. UWA has been ranked as having some of the highest quality undergraduates of any university in Australia and is ranked second in Australia for the quality of its undergraduate programs. 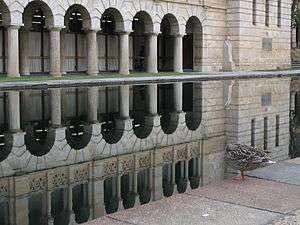 The University of Western Australia Student Guild is the premier student representative body on campus. It is affiliated with the National Union of Students. The vision of the UWA Student Guild is to be inclusive and representative of the student community and to provide relevant, high quality services to its members, whilst remaining environmentally and socially conscious.[43]

The Postgraduate Students' Association is the representative body for postgraduate students at UWA and is a department of the UWA guild.

The Guild provides a variety of services from catering to financial counselling. There are also over 100 clubs and societies funded by and affiliated with the Guild. The Guild publishes the student newspaper, the Pelican, as well as several other publications and is home to the Prosh charity event newspaper.[44]

The highlight of the social year is considered, by some students at least, to be Prosh, an April day on which students dress up in costume and process through the streets of the city selling risqué satirical newspapers for various charities. Uni Camp for Kids Inc. is the oldest registered charity in WA.[45] It began in 1936, and has over the past 70 odd years provided underprivileged West Australian children with University student carers during week-long camps in January, and day picnics throughout the year. Former Australian of the year Fiona Stanley, was a member, and a patron, speaking at the Club's black tie 70th anniversary in 2006.

The biennial Indian Rim Asian University Games were held from 28 November to 4 December 2005 at Challenge Stadium and UWA Sports Park, with more than 100 teams representing 23 universities from eight countries. Nine sports were contested at the week-long competition: badminton, cricket, field hockey, judo, taekwondo, soccer, volleyball, tennis and water polo. More than 35 countries from the Indian Ocean Rim and Asia were invited to attend the 2005 Games. The then Vice-Chancellor Professor Alan Robson committed funds to assist university teams from tsunami-affected areas, as well as to promote women's sport in the region.[46]

UWA also competes in the Australian University Championships which includes stand alone events for those sports that are not included in the AUG. They take place at different venues all over the country throughout the academic year

UWA has had a publishing arm since 1935, when the University was the sole tertiary campus in Western Australia. In 2009 it was renamed as UWA Publishing.

In mid-2009, UWA launched its project in Second Life (a 3D online virtual world open to the public, free of charge). By early 2010, UWA's Second Life project was more active than that of any other Australian university.[48] The UWA site spans three islands (projected to expand), featuring several models of historic buildings from the Crawley campus, a virtual lecture hall which is used to run real lectures, and a facility where the capabilities of Second Life are being explored for use in scientific visualisation research.[49][50] During 2009-2010, UWA in Second Life is running a monthly art contest, attracting around 70 artists and many visitors from around the world; every month, a new set of artworks are submitted, and the community, together with a judging panel, select winners in a number of categories, who are then awarded cash prizes.

The Hackett Memorial Buildings at The University of Western Australia, by John Melville-Jones, Hesperian Press 2012.