This article is about education in Hungary particularly the organization of the education system which shows similarities with Central European and ex-socialist countries.

The social environment of education

The decline of Hungary's population that started in 1981 has also continued in recent years. According to the 2001 census, the population of Hungary was 10,198,000, about half a million less than the figure of twenty years earlier. By 2005 the population dropped to 10,077,000. The age pyramid of the Hungarian population is among the most irregular ones in Europe. On 1 January 2005, due to the extremely low number of live births in the preceding years the size of the 0-4-year-old population was smaller than the next age groups of five-year increments up to the age group 60-64. There are major differences in the size of the various generations.

The official language of instruction is Hungarian, but a number of ethnic and national minorities (e.g. German, Romanian, Slovene, Serb and Croatian) have minority educational institutions with their own languages as first or second language of instruction at primary and secondary level of teaching. According to the 2003 survey, the rate of Romani children in the population entering school education in 2008-2009 is expected to be around 15%.[1]

A special feature of the Hungarian education system is that institutional structures and the structure of educational programmes are not aligned with each other. The system's institutional structure and the presence of programmes allowing early selection show similarities with Central European and ex-socialist countries. The system's content structure, the uniform and general phase of education has extended, and secondary level education may be characterised by increased opportunities for transition. The general phase of education lasts until the age of 16 in Hungary's education system. Participation in secondary education, offering a wide variety of programmes, is fairly high. Within secondary education, the proportion of students studying in programmes leading to a secondary school-leaving certificate and offering transition to tertiary education is around the international average.[2]

Organization of the educational system

This educational level is considered as a crucially important integrated part of the school system. It caters for children from 3 to 7 years of age. Since 2015, participation in pre-primary education at this level (kindergarten) is compulsory from age 3 (before 2015 only the final year - beyond age 5 - was compulsory), although exceptions are made for developmental reasons [3][4]

Public-sector institutions may only charge for services additional to their basic tasks, including for example extracurricular activities, meals, excursions, etc. Currently, the attendance rate with regard to the age groups 3-5, is just above 86%. The average duration of participation of children aged 3–7 in pre-primary education is just over 3 years (3.3), which is the highest average value in Europe.[5] 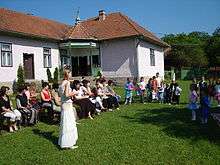 In Hungary a kindergarten is called an óvoda ('place for caring'). Children attend kindergarten between the ages of 3–6/7 (they go to school in the year in which they have their 7th birthday). Attendance in kindergarten is compulsory from the age of 3 years, though exceptions are made for developmental reasons.[6] Though kindergartens may include programs in subjects such as foreign languages and music, children spend most of their time playing. In their last year children begin to be prepared to attend elementary school.

Most kindergartens are state-funded. Kindergarten teachers are required to have a diploma.

Children start primary school when they reach school-maturity, usually in the year in which they have their 6th birthday (7th if they were born after May 31).

Primary education can last for 4, 6 or 8 years. 8-year education is the most widespread; the other two options were introduced in the early 1990s.

There are three kinds of secondary schools:

After finishing secondary school, students take a school-leaving exam (Matura or final exam, érettségi in Hungarian). This consists from 2005 of exams on five subjects: written exam in mathematics, verbal and written exams in literature and grammar, a foreign language, history, and written and/or verbal exam in a subject of the student's choice. These exams also serve as an entry exam to universities and colleges.

At schools where there is no nulladik évfolyam (beginners classes), they may be required to introduce them because the majority of Hungarians do not speak more than one language, or only speak their parents' language or dialect. Most students will finish High School at the age of 18 or 19, or when they complete Year 13.

Higher education in Hungary dates back to 1367 when Louis the Great founded the first Hungarian university in the city of Pécs.[8][9]

Higher education is divided between colleges and universities. College education generally lasts for 4 years, while university education lasts for 4 to 6 years depending on the course undertaken. Vocational curriculum usually last 2 years: they are opened to secondary vocational school's graduates, and eventually vocational school students (after 5 years of work in the desired field or after a two-year program leading to a "secondary school leaving certificate").[7] University PhD courses usually take 3 years to complete.

Before students get their degree, they must pass an intermediate level language exam in the foreign language of their choice. English and German are the most popular. The number of Spanish-learners has been growing in the last few years. Recently a high number of students chose Esperanto and Romani languages. Both are said to have a relatively small vocabulary and easy grammar.

This school type (in Hungarian: szakiskola) typically provides general and pre-vocational education in grades 9 and 10, normally followed by three or two years of VET. At the end of their studies, students will acquire a qualification (ISCED 2C or mostly 3C).[10]

Hungary attracts foreign students from both EU and non-EU countries. Three quarters of the students arriving in Hungary arrive from just ten countries, while one quarter of the students arrives from another 100 countries. Among the countries sending most students are Germany, Iran, Norway, Israel and Sweden, while the majority of guest students are citizens of the neighbouring countries. In the 2008/2009 academic year, the total number of foreign students studying in Hungary was 16 916, while this number was only 14 491 in 2005/2006.[11] The figures increases because of the following advantages:

Students interested in continuing their studies in Hungary will find preparatory courses in numerous universities from Debrecen to Budapest, from Budapest to Szeged, from Szeged to Pécs.[14]