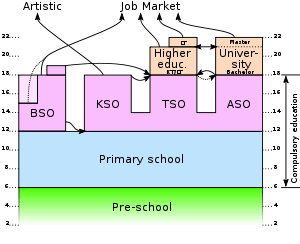 The different levels of education in Flanders

Education in Belgium is regulated and for the most part financed by one of the three communities: Flemish, French and German-speaking. Each community has its own school system, with small differences among them. The federal government plays a very small role: it decides directly the age for mandatory schooling and indirectly the financing of the communities.

The schools can be divided in three groups (Dutch: netten; French: réseaux):

Education in Belgium is compulsory between the ages of 6 and 18 or until one graduates from secondary school.[1]

In the past there were conflicts between state schools and Catholic schools, and disputes regarding whether the latter should be funded by the government (see first and second School Wars). The 1958 School Pact was an agreement by the three large political parties to end these conflicts.

The 1981 state reform transferred some matters from the federal Belgian level to the communities. In 1988, the majority of educational matters were transferred. Nowadays, very few general matters are regulated on a national level. The current ministries for education are the Flemish Government, the Government of the French Community and the Government of the German-speaking Community for each community respectively. Brussels, being bilingual French-Dutch, has schools provided by both the Flemish and French-speaking community. Municipalities with language facilities often have schools provided by two communities (Dutch-French or German-French) as well.

The different stages of education are the same in all communities:

Free pre-primary schooling (Dutch: kleuteronderwijs; French: enseignement maternel; German: Kindergarten) is provided to every child from the age of 2 years 6 months. In most schools the child can start in school as soon as they reach this age, so class size for the youngest children grows during the year. In the Flemish region, start dates are limited to 6 per year, after a school holiday period and the first school day in February.

The aim of pre-school is to develop, in a playful way, children's cognitive skills, their capacity to express themselves and communicate, their creativity and independence. There are no formal lessons or assessments, and everything is taught through a framework of play.

Although it is not compulsory, more than 90% of all children in the age category attend pre-school.[2]

Most pre-schools are attached to a particular primary school. Preschools and primary schools often share buildings and other facilities. Some schools offer special pre-primary education for children with disabilities or other special needs.

Primary school (Dutch: lager onderwijs; French: enseignement primaire; German: Grundschule) consists of six years and the subjects taught are generally the same at all schools. Primary schooling is free and age is the only entrance requirement.

Education in primary schools is rather traditional: it concentrates on reading, writing and basic mathematics, but also touches already a very broad range of topics (biology, music, religion, history, etc.). School usually starts about 8:30 and finishes around 15:30. A lunch time break is usually provided from 12:00 to 13:30. Wednesday afternoon, Saturday and Sunday are free. While morning lessons often concentrate on reading, writing and basic mathematics, lessons in the afternoon are usually about other topics like biology, music, religion, history or "do it yourself" activities.

There are also some private schools set up to serve various international communities in Belgium (e.g. children of seafarers or European diplomats), mainly around the larger cities. Some schools offer special primary education for children with disabilities or other special needs.

When graduating from primary school around the age of 12, students enter secondary education. Here they have to choose a course that they want to follow, depending on their skill level and interests.

The Belgian secondary education grants the pupils more choice as they enter a higher cycle. The first cycle provides a broad general basis, with only a few options to choose from (such as Latin, additional mathematics and technology). This should enable students to orient themselves in the most suitable way towards the many different courses available in the second and third stages. The second and third cycle are much more specific in each of the possible directions. While the youngest pupils may choose at the most two or four hours per week, the oldest pupils have the opportunity to choose between different "menus": like Mathematics and Science, Economics and Languages or Latin and Greek. They are then able to shape the largest part of the time they spend at school. However, some core lessons are compulsory like the first language and sport, etc. This mix between compulsory and optional lessons grouped in menus make it possible to keep class structures even for the oldest students.

Secondary school is divided into four general types. Each type consists of a set of different directions that may vary from school to school. The general types are as follows:

Admission to universities and colleges

In Belgium anybody with a qualifying diploma of secondary education is free to enroll at any institute of higher education of their choosing. The 4 major exceptions to this rule are those wanting to pursue a degree in:

Medicine/Dentistry
prospective medicine or dentistry students must take an entrance exam organized by the government. This exam was introduced in the 1990s to control the influx of students. The exam assesses the student's knowledge of science, their ability to think in abstract terms (IQ test) and their psychological aptitude to become a physician. This exam is now held only in Flanders.
Arts
entrance exams to arts programs, which are mainly of a practical nature, are organized by the colleges individually.
Engineering Sciences
leading to the degree of Master of Science, these faculties had a long-standing tradition of requiring an entrance exam (mainly focused on mathematics); the exam has now been abolished in the Flemish Community but is still organized in the French Community.
Management Sciences
Leading to a master's after master's degree or a Master in Business Administration degree, these management schools organise admission tests that focus on individual motivation and pre-knowledge of a specialised domain. E.g. A Master in Financial Management programme requires prior knowledge on corporate finance and management control topics.

The registration fee for any university or college is fixed by the government of the French-speaking or the Dutch-speaking community, and indexed yearly. Depending on whether the student is eligible and applies for financial aid, there are 3 prices:

The financial aid awarded by the community governments depends on the income of the student's family, and other familial circumstances, but is never more than approximately €5,000 per year. The aid is not at all based on the student's results, however, students who fail too many classes can lose their financial aid.

Prior to the adoption of the Bologna process, the Belgian higher education system had the following degrees:

Since the adoption of the Bologna process in most European countries, the higher education system in Belgium follows the Bachelor/Master system:

In Belgium, both Universities and Colleges are allowed to teach Bachelor and Master classes, either professional or academic.

After obtaining a master's degree, talented students can pursue research projects leading to a doctorate degree. PhDs are only awarded by Universities.

The United Nations Education Index, which is measured by the adult literacy rate and the combined primary, secondary, and tertiary gross enrolment ratio, ranks Belgium on the 18th place in the world as of 2011. A 2007 study found that violence experienced by teachers in francophone Belgium was a significant factor in decisions to leave the teaching profession.[6]