Not to be confused with the academic journal or the novel.
For a broader coverage related to this topic, see Tertiary education. 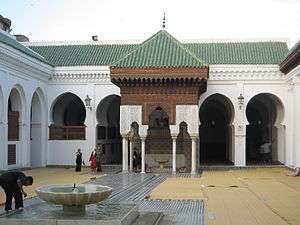 The University of al-Qarawiyyin in Fes, Morocco is the world's oldest existing, continually operating and the first degree awarding institution of higher learning in the world according to UNESCO and Guinness World Records.[1][2] 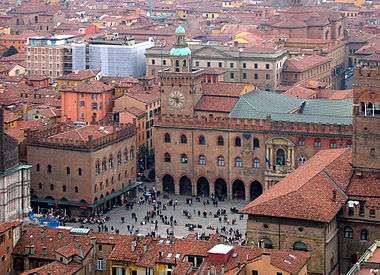 University of Bologna, located in Bologna, Italy, is the oldest institution of higher education in the Western world.[3][4][5] 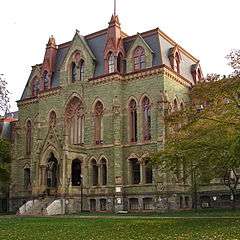 The University of Pennsylvania considers itself the first institution in the United States of America to use the term "university" in its name. 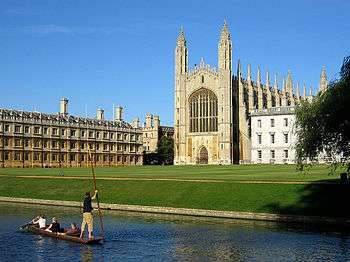 The University of Cambridge is an institution of higher learning in Cambridge, United Kingdom. 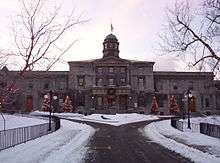 The McGill University is an institution of higher learning in Montreal, Canada. 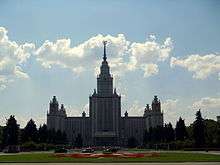 The Moscow State University is an institution of higher learning in Moscow, Russia.

The University of Tokyo is an institution of higher learning in Tokyo, Japan. 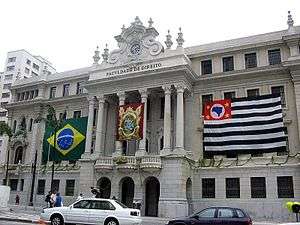 The University of São Paulo is an institution of higher learning in São Paulo, Brazil.

The University of Cape Town is an institution of higher learning in Cape Town, South Africa.

The right of access to higher education is mentioned in a number of international human rights instruments. The UN International Covenant on Economic, Social and Cultural Rights of 1966 declares, in Article 13, that "higher education shall be made equally accessible to all, on the basis of capacity, by every appropriate means, and in particular by the progressive introduction of free education". In Europe, Article 2 of the First Protocol to the European Convention on Human Rights, adopted in 1950, obliges all signatory parties to guarantee the right to education.

In the days when few pupils progressed beyond primary education, the term "higher education" was often used to refer to secondary education, which can create some confusion.[6] 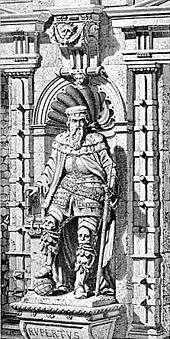 Rupert I founded the University of Heidelberg in 1386

Higher education includes teaching, research, exacting applied work (e.g. in medical schools and dental schools), and social services activities of universities.[7] Within the realm of teaching, it includes both the undergraduate level, and beyond that, graduate-level (or postgraduate level). The latter level of education is often referred to as graduate school, especially in North America.

Since World War II, developed and many developing countries have increased the participation of the age group who mostly studies higher education from the elite rate, of up to 15 per cent, to the mass rate of 16 to 50 per cent.[8][9][10] In many developed countries, participation in higher education has continued to increase towards universal or, what Trow later called, open access, where over half of the relevant age group participate in higher education.[11] Higher education is important to national economies, both as an industry, in its own right, and as a source of trained and educated personnel for the rest of the economy. College educated workers have commanded a measurable wage premium and are much less likely to become unemployed than less educated workers.[12][13] However, the admission of so many students of only average ability to higher education inevitably requires a decline in academic standards, facilitated by grade inflation.[14][15] Also, the supply of graduates in many fields of study is exceeding the demand for their skills, which aggravates graduate unemployment and underemployment, as well as credentialism and educational inflation.[16][17]

Demonstrated ability in reading, mathematics, and writing, as typically measured in the United States by the SAT or similar tests such as the ACT, have often replaced colleges' individual entrance exams, and is often required for admission to higher education.[18] There is some question as to whether advanced mathematical skills or talent are in fact necessary for fields such as history, English, philosophy, or art.[19]

The general higher education and training that takes place in a university, college, or Institute of Technology usually includes significant theoretical and abstract elements, as well as applied aspects (although limited offerings of internships or SURF programs attempt to provide practical applications). In contrast, the vocational higher education and training that takes place at vocational universities and schools usually concentrates on practical applications, with very little theory.

In addition, professional-level education is always included within Higher Education, and usually in graduate schools, since many postgraduate academic disciplines are both vocationally, professionally, and theoretically/research oriented, such as in the law, medicine, pharmacy, dentistry, and veterinary medicine. A basic requirement for entry into these graduate-level programs is almost always a bachelor's degree, although alternative means of obtaining entry into such programmes may be available at some universities. Requirements for admission to such high-level graduate programs is extremely competitive, and admitted students are expected to perform well. 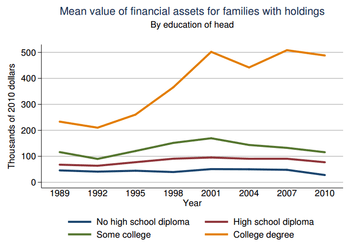 Mean financial wealth of U.S. families by education of the head of household, 1989-2010 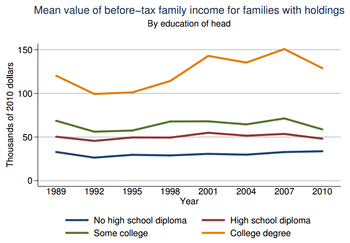 In the United States, there are large differences in wages and employment associated with different degrees. Medical doctors and lawyers are generally the highest paid workers, and have among the lowest unemployment rates. Among undergraduate fields of study, science, technology, engineering, math, and business generally offer the highest wages and best chances of employment, while education, communication, and liberal arts degrees generally offer lower wages and a lower likelihood of employment.[12][20]

Teaching engineering is teaching the application of scientific, economic, social, and practical knowledge in order to design, build, maintain, and improve structures, machines, devices, systems, materials and processes. It may encompass using insights to conceive, model and scale an appropriate solution to a problem or objective. The discipline of engineering is extremely broad, and encompasses a range of more specialized fields of engineering, each with a more specific emphasis on particular areas of technology and types of application. Engineering disciplines include: aerospace, biological, civil, chemical, computer, electrical, industrial, and mechanical.

The performing arts differ from the plastic arts or visual arts, insofar as the former uses the artist's own body, face and presence as a medium; the latter uses materials such as clay, metal or paint, which can be molded or transformed to create a work of art.

The plastic arts or visual arts are a class of art forms, that involve the use of materials, that can be moulded or modulated in some way, often in three dimensions. Examples are painting, sculpture, and drawing, etc.

Higher educational institutions in these arts include Film schools and Art schools.

This describes a distinct form of Higher Education that offers a particularly intense integration with the world of work in all its aspects (including teaching, learning, research and governance) and at all levels of the overarching Qualifications Framework of the European Higher Education Area. Its function is to diversify learning opportunities, enhance employability, offer qualifications and stimulate innovation, for the benefit of learners and society.

The intensity of integration with the world of work (which includes enterprise, civil society and the public sector) is manifested by a strong focus on application of learning. This approach involves combining phases of work and study, a concern for employability, cooperation with employers, the use of practice-relevant knowledge and use-inspired research.[21]

A report titled 'Education at a Glance 2014' published by the Organisation for Economic Co-operation and Development on 9 September 2014, revealed that by 2014, 84 percent of young people were completing upper secondary education over their lifetimes, in high-income countries. Tertiary-educated individuals were earning twice as much as median workers. In contrast to historical trends in education, young women were more likely to complete upper secondary education than young men. Additionally, access to education was expanding and growth in the number of people receiving university education was rising sharply. By 2014, close to 40 percent of people aged 25–34 (and around 25 percent of those aged 55–64), were being educated at university.[22]

The Lisbon Recognition Convention stipulates that degrees and periods of study must be recognised in all Signatory Parties of the Convention.

Universities may employ a number of people. Depending on the funding, a university typically hires one teacher per 3–25 students. According to the ideal of research-university, the university teaching staff is actively involved in the research of the institution. In addition, the university usually also has dedicated research staff and a considerable support staff. Typically to work in higher education as a member of the academic faculty, a candidate must first obtain a doctorate in an academic field, although some lower teaching positions require only a master's degree.

Most of the administrative staff works in different administrative sections, such as Student Affairs. In addition, there may be central support units, such as a university library which have a dedicated staff.[23]

The professional field involving the collection, analysis, and reporting of higher education data is called institutional research. Professionals in this field can be found at locations in addition to universities, e.g. state educational departments.

Post secondary institutions also employ graduate students in various assistantship roles. In the US, close to 50% of graduate students are employed as graduate assistants at some point. These apprenticeship-like positions provide opportunities for students to gain experience in, and exposure to, professional roles in exchange for funding of their academic programs.[24]

From the early 1950s to the present, more and more people in the United States have gone on to pursue degrees or certificates of higher education. However this has sparked some debate in recent years as some advocates say that a degree is not what it was once worth to employers. To clarify some advocates say that the financial costs that universities require from their students has gone up so dramatically that it is leaving many students in debt of loans of an average of $33,000.[25] Advocates advise parents to not send their children to college unless these children are committed to pursuing their future education. An increasing number of freshman every year drop out of their perspective programs or do not possess the maturity to have a balanced life away from home.[26]

However statistics from the U.S. Bureau of Labor Statistics indicate that the college educated are employed at a rate nearly twice that of the national average when compared to high school graduates.[27] The type of degree one pursues will determine how safe and prosperous his/her career path is. A study, published by the Pew Charitable Trusts, shows that among Americans ages 21 to 24, the drop in employment and income was much steeper among people who lacked a college degree. "Among those whose highest degree was a high school diploma, only 55% had jobs even before the downturn, and that fell to 47% after it. For young people with an associates degree, the employment rate fell from 64 to 57. Bachelor's degree slipped from 69 to 65."[28] Professor Lisa Kahn of Yale stated that people who graduated from college in the most recent recession were in a position to gain better security than others.

Ultimately a survey, the Great Jobs and Great Lives Gallup-Purdue Index report, released in May, found the type of college that students attend and in some cases even majors they choose have very little to do with their overall success and well-being later in life. What matters more, the index found, is feeling supported and making emotional connections during school.[29]