The kernels of einkorn wheat are inside these spikelets.

Einkorn wheat (from German Einkorn, literally "single grain") can refer either to the wild species of wheat, Triticum boeoticum, or to the domesticated form, Triticum monococcum. The wild and domesticated forms are either considered separate species, as here, or as subspecies: Triticum monococcum subsp. boeoticum (wild) and T. monococcum subsp. monococcum (domesticated). Einkorn is a diploid species (2n = 14 chromosomes) of hulled wheat, with tough glumes ('husks') that tightly enclose the grains. The cultivated form is similar to the wild, except that the ear stays intact when ripe and the seeds are larger. The domestic form is known as petit épeautre in French, Einkorn in German, einkorn or littlespelt in English, piccolo farro in Italian and espelta petita in Catalan.

Einkorn wheat was one of the first plants to be domesticated and cultivated. The earliest clear evidence of the domestication of Einkorn dates from 10,600 to 9,900 years before present (8,650 BC to 7,950 BC) from Çayönü and Cafer Höyük, two Early Pre-Pottery Neolithic B archaeological sites in southern Turkey.[1] Remnants of Einkorn have been found with the iceman mummy Ötzi. 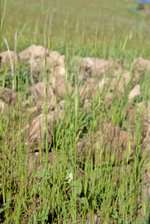 Einkorn wheat commonly grows wild in the hill country in the northern part of the Fertile Crescent and Anatolia although it has a wider distribution reaching into the Balkans and south to Jordan near the Dead Sea. It is a short variety of wild wheat, usually less than 70 centimetres (28 in) tall and is not very productive of edible seeds.

The principal difference between wild einkorn and cultivated einkorn is the method of seed dispersal. In the wild variety the seed head usually shatters and drops the kernels (seeds) of wheat onto the ground. This facilitates a new crop of wheat. In the domestic variety, the seed head remains intact. While such a mutation may occasionally occur in the wild, it is not viable there in the long term: the intact seed head will only drop to the ground when the stalk rots, and the kernels will not scatter but form a tight clump which inhibits germination and makes the mutant seedlings susceptible to disease. But harvesting einkorn with intact seed heads was easier for early human harvesters, who could then manually break apart the seed heads and scatter any kernels not eaten. Over time and through selection, conscious or unconscious, the human preference for intact seed heads created the domestic variety, which also has slightly larger kernels than wild einkorn. Domesticated einkorn thus requires human planting and harvesting for its continuing existence.[2] This process of domestication might have taken only 20 to 200 years with the end product a wheat easier for humans to harvest.[3]

Einkorn wheat is one of the earliest cultivated forms of wheat, alongside emmer wheat (T. dicoccum). Grains of wild einkorn have been found in Epi-Paleolithic sites of the Fertile Crescent. Although gathered from the wild for thousands of years, Einkorn Wheat was first domesticated approximately 10,000 years BP in the Pre-Pottery Neolithic A (PPNA) or B (PPNB) periods.[4] Evidence from DNA finger-printing suggests einkorn was first domesticated near Karaca Dağ in southeast Turkey, an area in which a number of PPNB farming villages have been found.[5]

An important characteristic facilitating the domestication of einkorn and other annual grains is that the plants are largely self-pollinating. Thus, the desirable (for human management) traits of einkorn could be perpetuated at less risk of cross-fertilization with wild plants which might have traits—e.g. smaller seeds, shattering seed heads, etc. -- less desirable for human management.[6]

Einkorn wheat is low-yielding but can survive on poor, dry, marginal soils where other varieties of wheat will not. It is primarily eaten boiled in whole grains or in porridge. Its flour lacks the rising characteristics desirable for bread.[7]

Einkorn, as with other ancient varieties of wheat, is grouped with "the covered wheats" as its kernels do not break free from its seed coat (glume) with threshing and it is, therefore, difficult to separate the husk from the seed.[8]

Einkorn is a popular food in northern Provence.[9] It is also used for bulgur or as animal feed in mountainous areas of France, India, Italy, Morocco, the former Yugoslavia, Turkey and other countries.[8]

Einkorn has a higher percentage of protein than modern red wheats and is considered more nutritious because it has also higher levels of fat, phosphorus, potassium, pyridoxine, and beta-carotene.[8]

All of species and hybrids of wheat are not suitable for people with gluten related disorders, as celiac disease, non-celiac gluten sensitivity and wheat allergy.[10][11]

Australian scientists have succeeded in breeding the salt-tolerance feature of T. monococcum into durum wheat.[12]