This article is about the wheat species. For the past tense and past participle of "spell", see Spelling.

Spelt (Triticum spelta), also known as dinkel wheat,[3] or hulled wheat,[3] is a species of wheat cultivated since 5000 BC.

Spelt was an important staple in parts of Europe from the Bronze Age to medieval times; it now survives as a relict crop in Central Europe and northern Spain and has found a new market as a health food. Spelt is sometimes considered a subspecies of the closely related species common wheat (Triticum aestivum), in which case its botanical name is considered to be Triticum aestivum subsp. spelta. It is a hexaploid wheat, which means it has six sets of chromosomes. 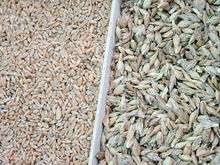 Spelt, without and with husks

Spelt has a complex history. It is a wheat species known from genetic evidence to have originated as a naturally occurring hybrid of a domesticated tetraploid wheat such as emmer wheat and the wild goat-grass Aegilops tauschii. This hybridisation must have taken place in the Near East because this is where Ae. tauschii grows, and it must have taken place before the appearance of common or bread wheat (Triticum aestivum, a hexaploid free-threshing derivative of spelt) in the archaeological record about 8,000 years ago.

Genetic evidence shows that spelt wheat can also arise as the result of hybridisation of bread wheat and emmer wheat, although only at some date following the initial Aegilops–tetraploid wheat hybridisation. The much later appearance of spelt in Europe might thus be the result of a later, second, hybridisation between emmer and bread wheat. Recent DNA evidence supports an independent origin for European spelt through this hybridisation.[4] Whether spelt has two separate origins in Asia and Europe, or single origin in the Near East, is currently unresolved.[5][6]

In Greek mythology spelt (ζειά [zeiá] in Greek) was a gift to the Greeks from the goddess Demeter, and was first used by the Greeks. Being a sailing people, the Greeks taught the rest of the world wherever they touched how to use, cultivate and honour zeiá. The earliest archaeological evidence of spelt is from the fifth millennium BC in Transcaucasia, north-east of the Black Sea, though the most abundant and best-documented archaeological evidence of spelt is in Europe.[7] Remains of spelt have been found in some later Neolithic sites (2500–1700 BC) in Central Europe.[7][8] During the Bronze Age, spelt spread widely in central Europe. In the Iron Age (750–15 BC), spelt became a principal wheat species in southern Germany and Switzerland; by 500 BC, it was in common use in southern Britain.[7]

References to the cultivation of spelt wheat in Biblical times (see matzo), in ancient Egypt and Mesopotamia and in ancient Greece are incorrect and result from confusion with emmer wheat.[9]

In the Middle Ages, spelt was cultivated in parts of Switzerland, Tyrol, and Germany. Spelt was introduced to the United States in the 1890s. In the 20th century, spelt was replaced by bread wheat in almost all areas where it was still grown. The organic farming movement revived its popularity somewhat toward the end of the century, as spelt requires less fertilizer.

In a 100 gram serving, uncooked spelt provides 338 calories and is an excellent source (20% or more of the Daily Value, DV) of protein, dietary fiber, several B vitamins and numerous dietary minerals (table). Richest nutrient contents include manganese (143% DV), phosphorus (57% DV) and niacin (46% DV) (table). Cooking substantially reduces all nutrient contents.[10] Spelt contains about 70% total carbohydrates, including 11% as dietary fiber, and is low in fat (table).

As spelt contains a moderate amount of gluten, it is suitable for baking, but this component also makes it unsuitable for people with gluten-related disorders,[11] such as celiac disease,[12] non-celiac gluten sensitivity and wheat allergy sufferers.[11] In comparison to hard red winter wheat, spelt has a more soluble protein matrix characterized by a higher gliadin:glutenin ratio.[13][14] 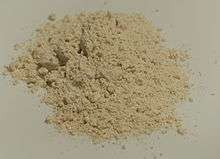 Spelt flour is becoming more easily available. Spelt bread is sold in health food shops and some bakeries in an increasing variety of types of loaf, similar in colour to light rye breads but usually with a slightly sweet and nutty flavour. Biscuits, crackers, and pretzels are also produced, but are more likely to be found in a specialty bakery or health food store than in a regular grocer's shop. In Germany and Austria, spelt loaves and rolls (Dinkelbrot) are widely available in bakeries as is spelt flour in supermarkets. The unripe spelt grains are dried and eaten as Grünkern ("green grain").

Dutch Jenever makers distill with spelt.[15] Beer brewed from spelt is sometimes seen in Bavaria[16] and Belgium[17] and spelt is distilled to make vodka in Poland. 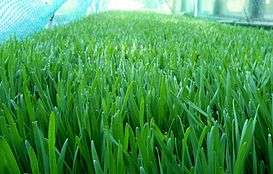 Grown outdoors, spelt has a deeper green color than wheat.

While today spelt is a specialty crop, its popularity as a peasants' staple food of the past has been attested in literature. Although today's Russian-speaking children perhaps do not know exactly what polba (spelt) looks or tastes like,[18] they may recognize the word as something-or-other that can be made into porridge, having heard Pushkin's well-rhymed story in which the poor workman Balda asks his employer the priest "to feed me boiled spelt" ("есть же мне давай варёную полбу").[19] In Horace's Satire 2.6 (late 31 – 30 B.C.), which ends with the story of the Country Mouse and the City Mouse, the country mouse eats spelt at dinner while serving his city guest finer foods.

In The Divine Comedy of Dante Alighieri, Pietro della Vigna appears as a suicide in Circle VII, ring ii, Canto XIII of the Inferno. Pietro describes the fate awaiting souls guilty of suicide to Dante the Pilgrim and Virgil. According to Pietro, the soul of the suicide grows into a wild tree and is tormented by harpies that feast upon its leaves. Pietro likens the initial growth and transformation of the soul of the suicide to the germination of a grain of spelt (Inferno XIII, 94–102).

Spelt is also mentioned in the Bible. The seventh plague in Egypt reported in Exodus, chapter 9 was said not to have damaged the harvest of wheat and spelt, as these were "late crops".[20] Ezekiel 4:9 says: "Take thou also unto thee wheat, and barley, and beans, and lentils, and millet, and spelt, and put them in one vessel, and make thee bread thereof ...", though as noted above this is presumably a mistranslation and should be "emmer". It is mentioned again in Isaiah 28:25: "...and put in the wheat in rows and the barley in the appointed place and the spelt in the border thereof?"