The Elbow River is a river in southern Alberta, Canada. It flows from the Canadian Rockies to the city of Calgary, where it merges into the Bow River.

The Elbow River is popular among canoers, rafters, campers and hikers and runs through several features including Allen Bill Pond, Forgetmenot Pond, and Elbow Falls. Sections of the river are closed to fishing, or are "catch-and-release" waters.

The water flow of the Elbow River fluctuates significantly, and in June 2005 a flood occurred that was so severe (the heaviest in at least two centuries according to Alberta Government estimates) that the water flowed over the Glenmore Dam. Approximately 1,500 Calgarians living downstream were evacuated.[2] Another, more extensive flood began on 20 June 2013, with tens of thousands of evacuations.[3]

In June 2013, Alberta, Canada, experienced heavy rainfall that triggered catastrophic flooding throughout much of the southern half of the province along the Bow, Elbow, Highwood and Oldman rivers and tributaries. A dozen municipalities in Southern Alberta declared local states of emergency on June 20 as water levels rose and numerous communities were placed under evacuation orders.[4] 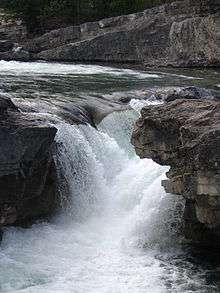 Elbow Falls on the upper course

The Elbow River originates from Elbow Lake in the Elbow-Sheep Wildland Provincial Park in the Canadian Rockies, then continues through the Rocky Mountain foothills and flows into the hamlet of Bragg Creek. The Elbow River passes under Highway 22 and then travels through the rural community of Springbank and the Tsuu T'ina Nation 145 Indian reserve directly west of Calgary. The river enters the City of Calgary at the Weaselhead Flats, an artificial inland delta, and into the Glenmore Reservoir, one of Calgary's two chief sources of drinking water. From there, it flows northward through residential communities towards the city centre, is crossed by Macleod Trail, passes the Calgary Stampede grounds and finally joins the Bow River west of the Calgary Zoo.

Fort Calgary (the North-West Mounted Police post established in 1873 around which settlement in the Calgary area began) was located at the confluence of the Bow and Elbow rivers.