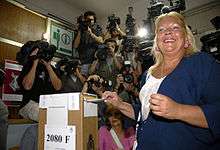 Elisa Carrió votes in the 2007 elections. She lost, but made history as the first female runner-up to another woman in a presidential race.

Elisa María Avelina "Lilita" Carrió (born 26 December, 1956) is an Argentine lawyer, professor and politician, who is an Argentine National Deputy for Buenos Aires. She was the founder of the Argentine political party Civic Coalition ARI (Coalición Cívica ARI).[1][2]

Born in Resistencia, Chaco, in a traditional family, Carrió was a former teenage beauty queen.[3] She enrolled at the National University of the Northeast and earned a Law Degree in 1978. Carrió entered public service as a technical advisor to the Chaco Province Prosecutor's Office in 1979,[4] and was appointed to the provincial Solicitor General's office in 1980.[5]

She later taught constitutional law at her alma mater, and from 1986 to 1988 served as director of the human rights department of the University of Buenos Aires Law School.[6] Carrió entered politics at the request of her mentor, Raúl Alfonsín, was elected to the 1994 Constitutional Amendments Convention, during which she was a leading sponsor of Article 75, section 22, which mandated the adoption of international human rights treaties ratified by Argentina into the Argentine Constitution.[7] She was elected to the Chamber of Deputies for her province, representing the centrist Radical Civic Union (UCR), in 1995, and in 1997, obtained passage of a bill giving constitutional authority to the international Treaty of Disappeared Persons.[8]

She campaigned heavily for Fernando de la Rúa in 1999. Re-elected to Congress, Carrió earned growing publicity as the chair of the Congressional Committee on Corruption and Money Laundering after 1999, particularly during a series of exchanged accusations in 2001 between herself and Economy Minister Domingo Cavallo.[9] The dispute backfired against Carrió, however, when documents she presented in court in August as evidence of corruption on the part of Cavallo were proven to be forgeries created by Daniel Díaz, who was arrested in October on charges of counterfeiting and securities fraud.[10]

After the rupture in 2000 of the Alliance for Work, Justice and Education (which the UCR had formed in 1997 with Socialists and the Front for a Country in Solidarity), Carrió turned to the Democratic Socialist Party and other politicians with leftist leanings who were discontented in their parties, and formed an informal front, initially called "Argentinians for a Republic of Equals" (Argentinos por una República de Iguales), ARI. After dissensions, the socialists left, and so did Carrió and other figures from their original parties. Together, they formed a new party, called Alternative for a Republic of Equals (also ARI), in 2002.

Carrió was a presidential candidate in the 2003 elections, obtaining fifth place with about 14% of the votes. She was returned to the Lower House of Congress in 2005, winning a seat as a Deputy for the Autonomous City of Buenos Aires.

Carrió ran again for the Presidency on the 2007 elections, representing a front called the Civic Coalition.[11] In March 2007 she resigned her seat in Congress to conduct the campaign.[12] Together with her running mate Rubén Giustiniani (chairman of the Socialist Party), Carrió obtained about 23% of the vote, coming in a distant second after Cristina Fernández de Kirchner. She won the majority vote in two of the three largest cities of Argentina (Buenos Aires and Rosario), but she suffered a larger defeat in Buenos Aires Province, the most populous district, and came up well short of forcing Fernández into a runoff.[13][14]

Following the 2007 election, Carrió announced she would not be running for the presidency again, declaring that she would instead enhance her role as "leader of the opposition" and seek to become a member of or influence in a future administration following the 2011 elections.[15] She was reunited ahead of the June 2009 mid-term elections with erstwhile allies, the UCR and Socialists, in the Civic and Social Agreement. This coalition yielded gains only for the UCR, however, and Carrió's reduced influence therein ended in her acrimonious departure from the group in August 2010.[16] She later reconsidered her earlier decision to opt out of the 2011 presidential race, and on December 12, 2010, she announced her candidacy on the Civic Coalition/ARI ticket.[17] Carrió received 1.8% of the vote in the 23 October election, placing last in a field of seven candidates.

Carrió joined the Broad Front UNEN alliance upon its formation in June 2013, and was reelected to the Lower House on their ticket in elections that October. Her ongoing shift to the right, however, as well as her desire to fold UNEN into a coalition led by the right-wing PRO party,[18] led to her break with UNEN in November 2014.[19]