Republican Proposal (Spanish: Propuesta Republicana, PRO) is a center-right political party in Argentina. It is usually referred to as PRO. PRO was formed as an electoral alliance in 2005, but was transformed into a unitary party on 3 June 2010.

PRO began as an alliance between Commitment to Change, the party of Mauricio Macri based in Buenos Aires, and Recreate for Growth (Recrear) of Ricardo López Murphy. It was created ahead of the legislative elections of 23 October 2005.

Other provincial center-right parties joined under the Recrear banner within PRO. Macri and López Murphy had been in discussions with Governor Jorge Sobisch, leader of the Neuquino People's Movement, another leading center-right politician, although these discussions broke down. Macri is the President of the alliance.

In the June 2007 elections in the city of Buenos Aires, PRO decisively won the election, with Macri becoming Head of Government and the alliance taking 15 of the 30 seats in the city legislature. In addition to Commitment to Change and Recreate for Growth, the alliance included the Democratic Progressive Party, the Democratic Party, the Federal Party, the Movement for Integration and Development (MID), the Popular Union, the White Party and the Front of Independent Youth.

In the October 2007 Presidential and legislative elections, PRO did not officially back a candidate but gave tacit support to the bid of López Murphy, who stood as the Recrear candidate. Sobisch also stood. López Murphy did poorly gaining just 1.45% of the vote. PRO and its allies stood in the congressional elections and made a net gain of 2 seats in the Chamber of Deputies winning 6 seats overall. However, its 13% share of the vote in October 2007 in the city of Buenos Aires contrasted with its 44% share just a few months previously in the city elections.

In August 2009, Recreate for Growth gave up its formal independence and was completely absorbed by the Republican Proposal. On 3 June 2010, the alliance became recognized as a national political party. 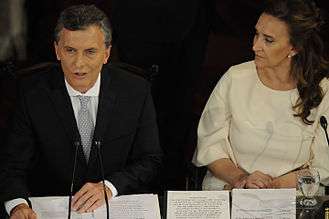 Even though the majority of national deputies of PRO voted against same sex marriage[5] (specially national deputies Gabriela Michetti and Silvia Majdalani worked very actively on the campaigns against it),[6] Mauricio Macri has supported LGBT rights to the point of confronting with some of his allies.[7]