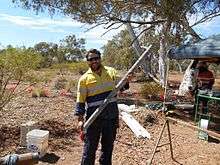 Engineering geology studies may be performed during the planning, environmental impact analysis, civil or structural engineering design, value engineering and construction phases of public and private works projects, and during post-construction and forensic phases of projects. Works completed by engineering geologists include; geological hazard assessments, geotechnical, material properties, landslide and slope stability, erosion, flooding, dewatering, and seismic investigations, etc. Engineering geology studies are performed by a geologist or engineering geologist that is educated, trained and has obtained experience related to the recognition and interpretation of natural processes, the understanding of how these processes impact human made structures (and vice versa), and knowledge of methods by which to mitigate against hazards resulting from adverse natural or human made conditions. The principal objective of the engineering geologist is the protection of life and property against damage caused by various geological conditions.

Although the study of geology has been around for centuries, at least in its modern form, the science and practice of engineering geology only commenced as a recognized discipline until the late 19th and early 20th centuries. The first book titled Engineering Geology was published in 1880 by William Penning. In the early 20th century Charles Berkey, an American trained geologist who was considered the first American engineering geologist, worked on several water-supply projects for New York City, then later worked on the Hoover dam and a multitude of other engineering projects. The first American engineering geology textbook was written in 1914 by Ries and Watson. In 1921 Reginald W. Brock, the first Dean of Applied Science at the University of British Columbia, started the first undergraduate and graduate degree programs in Geological Engineering, noting that students with an engineering foundation made first-class practicing geologists. In 1925, Karl Terzaghi, an Austrian trained engineer and geologist, published the first text in Soil Mechanics (in German). Terzaghi is known as the parent of soil mechanics, but also had great interest in geology; Terzaghi considered soil mechanics to be a sub-discipline of engineering geology. In 1929, Terzaghi, along with Redlich and Kampe, published their own Engineering Geology text (also in German).

The need for geologist on engineering works gained worldwide attention in 1928 with the failure of the St. Francis Dam in California and the death of 426 people. More engineering failures which occurred the following years also prompted the requirement for engineering geologists to work on large engineering projects.

Engineering geology investigation and studies may be performed:

Typical geologic hazards or other adverse conditions evaluated and mitigated by an engineering geologist include:

An engineering geologist or geophysicist may be called upon to evaluate the excavatability (i.e. rippability) of earth (rock) materials to assess the need for pre-blasting during earthwork construction, as well as associated impacts due to vibration during blasting on projects.

Soil mechanics is a discipline that applies principles of engineering mechanics, e.g. kinematics, dynamics, fluid mechanics, and mechanics of material, to predict the mechanical behavior of soils. Rock mechanics is the theoretical and applied science of the mechanical behaviour of rock and rock masses; it is that branch of mechanics concerned with the response of rock and rock masses to the force-fields of their physical environment. The fundamental processes are all related to the behaviour of porous media. Together, soil and rock mechanics are the basis for solving many engineering geology problems.

The methods used by engineering geologists in their studies include