Examples of ergative–absolutive languages include Basque, Georgian and Mayan. 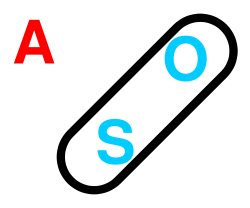 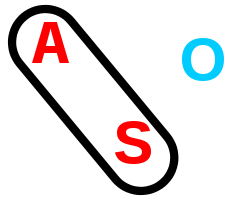 These different arguments are usually symbolized as follows:

The relationship between ergative and accusative systems can be schematically represented as the following:

See morphosyntactic alignment for a more technical explanation and a comparison with nominative–accusative languages.

Note that the word subject, as it is typically defined in grammars of nominative–accusative languages, has a different application when referring to ergative–absolutive languages, or when discussing morphosyntactic alignment in general.

Ergative languages tend to be either verb-final or verb-initial; there are few, if any, ergative SVO-languages.[2]

Ergativity can be found in both morphological and syntactic behavior.[3]

If the language has morphological case, then the verb arguments are marked thus:

If there is no case marking, ergativity can be marked through other means, such as in verbal morphology. For instance, Abkhaz and most Mayan languages have no morphological ergative case, but they have verbal agreement structure which is ergative. In languages with ergative–absolutive agreement systems, the absolutive form is usually the most unmarked form of a word (exceptions include Nias and Tlapanec[4]).

Here "-Ø" represents a zero morpheme, as the absolutive case is unmarked in Basque. The forms for the ergative are "-k" after a vowel, and "-ek" after a consonant. It is a further rule in Basque grammar that in most cases a noun phrase must be closed by a determiner. The default determiner (commonly called the article which is suffixed to common nouns and usually translatable by "the" in English) is "-a" in the singular and "-ak" in the plural, the plural being marked only on the determiner and never the noun. For common nouns, this default determiner is fused with the ergative case marker. Thus one obtains the following forms for "gizon" ("man" in English): gizon-a (man-the.sing.abs), gizon-ak (man-the.pl.abs), gizon-ak (man-the.sing.erg), gizon-ek (man-the.pl.erg). Note that when fused with the article, the absolutive plural is homophonous with the ergative singular. See Basque grammar for details.[5]

In contrast, Japanese is a nominative–accusative language:

A number of languages have both ergative and accusative morphology. A typical example is a language that has nominative–accusative marking on verbs and ergative–absolutive case marking on nouns.

Georgian also has an ergative alignment, but the agent is only marked with the ergative case in the perfective aspect (also known as the "aorist screeve"). Compare:

K'ac'- is the root of the word "man". In the first sentence (present continuous tense) the agent is in the nominative case (k'ac'i). In the second sentence, which shows ergative alignment, the root is marked with the ergative suffix -ma.

However, there are some intransitive verbs in Georgian that behave like transitive verbs, and therefore employ the ergative case in the past tense. Consider:

Although the verb sneeze is clearly intransitive, it is conjugated like a transitive verb. In Georgian there are a few verbs like these, and there has not been a clear-cut explanation as to why these verbs have evolved this way. One explanation is that verbs such as "sneeze" used to have a direct object (the object being "nose" in the case of "sneeze") and over time lost these objects, yet kept their transitive behavior.

Syntactic ergativity may appear in:

The term ergative–absolutive is considered unsatisfactory by some, since there are very few languages without any patterns that exhibit nominative–accusative alignment. Instead they posit that one should only speak of ergative–absolutive systems, which languages employ to different degrees.

Many languages classified as ergative in fact show split ergativity, whereby syntactic and/or morphological ergative patterns are conditioned by the grammatical context, typically person or the tense/aspect of the verb. Basque is unusual in having an almost fully ergative system in case-marking and verbal agreement, though it shows thoroughly nominative–accusative syntactic alignment.[6]

In Urdu and Hindi, the ergative case is marked on agents in the preterite and perfect tenses for transitive and ditransitive verbs, while in other situations agents appear in the nominative case.

(¹) The grammatical analysis has been simplified to show the features relevant to the example.

Optional ergativity may be motivated by:

Languages from Australia, New Guinea and Tibetan have been shown to have optional ergativity.[7]

Prototypical ergative languages are, for the most part, restricted to specific regions of world: the Caucasus, parts of North America and Mesoamerica, the Tibetan Plateau, and Australia.

Some specific languages are the following:

Certain Australian Aboriginal languages (e.g., Wangkumara) possess an intransitive case and an accusative case along with an ergative case, and lack an absolutive case; such languages are called ergative–accusative languages or tripartite languages.

Sign languages (for example, Nepali Sign Language) should also generally be considered ergative in the patterning of actant incorporation in verbs.[21] In sign languages which have been studied, classifier handshapes are incorporated into verbs, indicating the subject of intransitive verbs when incorporated, and the object of transitive verbs. (If we follow the "Semantic Phonology" model proposed by William Stokoe (1991)[22] this ergative-absolutive patterning also works at the level of the lexicon: thus in Nepali Sign Language the sign for TEA has the motion for the verb DRINK with a manual alphabet handshape च /ca/ (standing for the first letter of the Nepali word TEA चिया /chiya:/) being incorporated as the object.)

Many other languages have limited ergativity. In both Pashto and Hindi (Indo-Iranian), ergative behavior occurs only in the preterite and perfect tenses, and in the Georgian, ergativity only occurs in the perfective.

The Philippine languages (e.g., Tagalog) are sometimes considered ergative (Schachter 1976, 1977; Kroeger 1993), however they have also been considered to have their own unique morphosyntactic alignment. See Austronesian alignment.

Several scholars have hypothesized that Proto-Indo-European was an ergative language. However, this hypothesis is disputed.[23]

Approximations of ergativity in English

Etymologically, the sense in which "-ee" denotes the object of a transitive verb is the original one, arising from French past participles in "-é". This is still the prevalent sense in British English: the intransitive uses are all 19th-century American coinages and all except "escapee" are still marked as "chiefly U.S." by the "Oxford English Dictionary".