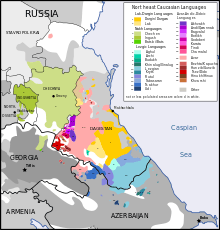 The Northeast Caucasian, East Caucasian, or Nakho-Dagestanian languages are a language family spoken in the Russian republics of Dagestan, Chechnya, and Ingushetia, in northern Azerbaijan and northeastern Georgia, as well as in diaspora populations in Russia, Turkey, and the Middle East. They are occasionally called Caspian, as opposed to Pontic for the Northwest Caucasian languages.

Name of the family

Several names have been in use for this family. The most common term, Northeast Caucasian, contrasts the three established families of the Caucasus language area: Northeast Caucasian, Northwest Caucasian (Abkhaz–Adyghean), and South Caucasian (Kartvelian). This may be shortened to East Caucasian. The term Nakh(o)-Dagestanian can be taken to reflect a primary division of the family into Nakh and Dagestanian branches, a view which is no longer widely accepted, or Dagestanian can subsume the entire family. The rare term Caspian (as in bordering the Caspian Sea) is only used in opposition to the use of Pontic (as in bordering the Black Sea) for the Northwest Caucasian languages.

Historically, Northeast Caucasian phonemic inventories were thought to be significantly smaller than those of the neighboring Northwest Caucasian family. However, more recent research has revealed that many Northeast Caucasian languages are much more phoneme-rich than previously believed, with some languages containing as many as 70 consonants.[2]

In addition to numerous oral obstruents, many Northeast Caucasian languages also possess a number of back consonants, including uvulars, pharyngeals, and glottal stops and fricatives. Northeast Caucasian phonology is also notable for its use of numerous secondary articulations as contrastive features. Whereas English consonant classes are divided into voiced and voiceless phonemes, Northeast Caucasian languages are known to contrast phones into voiced, voiceless, ejective, and tense variants, which contributes to their large phonemic inventories. Some languages also include palatalization and labialization as contrastive features.[3] Most languages in this family contrast tense and weak consonants. Tense consonants are characterized by the intensiveness of articulation, which naturally leads to a lengthening of these consonants.

In contrast to the generally large consonant inventories of Northeast Caucasian languages, most languages in the family have relatively few vowels.[4] However, there are some exceptions to this trend, such as Chechen, which has at least twenty-eight vowels, diphthongs, and triphthongs.[5]

These languages can be characterized by strong suffixal agglutination. Weak tendencies towards inflection may be noted as well. Nouns display covert nominal classification, but partially overt cases of secondary origin can be observed too. The number of noun classes in individual languages range from two to eight. Regarding grammatical number, there may be a distinction between singular and plural, plurality itself may impact the class to which a noun belongs.[6] In some cases, a grammatical collective is seen. Many languages distinguish local versus functional cases,[7] and to some degree also casus rectus versus casus obliquus.

The inflectional paradigms are often based on partially classifying productive stem extensions (absolutive, and oblique, ergative, and genitive inflection. Localization is mostly conveyed by postpositions, but it can be also partly based on preverbs. Noun phrases exhibit incomplete class agreement, group inflection (on the noun) with partial attributive oblique marking, which may, in turn, carry a partially determining function.

Blue is used to mark ergative markers, as well as and transitive agents in the English translations.

Red is used to mark null morphemes, as well as transitive objects and intransitive subjects in the English translations.

Northeast Caucasian languages have between two and eight noun classes.[4] In these languages, nouns are grouped into grammatical categories depending on certain semantic qualities, such as animacy and gender. Each noun class has a corresponding agreement prefix, which can attach to verbs or adjectives of that noun. Prefixes may also have plural forms, used in agreement with a plural noun.[11] The following table shows demonstrates the noun–adjective agreement paradigm in the Tsez language. Colors are used to emphasize agreement between adjectival prefixes and noun classes.

A long-time classification divided the family into Nakh and Dagestanian branches, whence the term Nakho-Dagestanian.[12] However, attempts at reconstructing the protolanguage suggest that the Nakh languages are no more divergent from Dagestanian than the various branches of Dagestanian are from each other,[13] although this is still not universally accepted. The following outline, based on the work of linguist Bernard Comrie and others, has been adopted by Ethnologue. An Avar–Andi–Dido branch was abandoned, but has been resurrected as the "New Type" languages in Schulze (2009, 2013), and Lak–Dargwa has likewise returned.

Spoken in the Northwest Dagestan highlands and western Dagestan. Avar is the lingua franca for these and the Tsezic languages and is the only literary language. Schulze (2009) gives the following family tree for the Avar–Andic languages:

All figures except for Khwarshi were retrieved from Ethnologue.[16]

Spoken in the Central Dagestan highlands. Lak is a literary language.

Spoken by 492,490 in Dagestan, as well as Azerbaijan, Central Asia, and Ukraine.[18] Dargwa proper is a literary language.

Spoken in Chechnya, Ingushetia, and Georgia. Chechen and Ingush are official languages of their respective republics.

Spoken in the Southeast Dagestan highlands and in Northern Azerbaijan. The Lezgian language or, as the Lezgian people themselves call it, Лезги чlал (lezgi ch'al), is the biggest in terms of the number of native speakers of all the languages of the Lezgic group (other languages from this group include Tabasaran, Udi, Tsakhur, and Rutul). Tabasaran was once thought to be the language with the largest number of grammatical cases at 54, which could, depending on the analysis, instead be the Tsez language with 64. The Lezgic family, along with a couple of other families (Avar–Andic, Tsezic, Lak, Dargin, and Khinalug), forms the Daghestanian part of the Nakh–Daghestanian language family (the Nakh part is constituted by Chechen, Ingush and related small languages).

All figures retrieved from Ethnologue.[23]

Connections to other families

Some linguists such as Sergei Starostin think that the Northeast and Northwest Caucasian languages should be joined into a putative North Caucasian family,[24] citing shared vocabulary and typological features as evidence.[25] This proposed family does not usually include the neighboring Kartvelian languages.[25] This hypothesis is not well demonstrated.[26]

Connections to Hurrian and Urartian

Some linguists—notably Igor M. Diakonoff and Starostin—also see similarities between the Northeast Caucasian family and the extinct languages Hurrian and Urartian. Hurrian was spoken in various parts of the Fertile Crescent in the 3rd and 2nd millennia BC. Urartian was the language of Urartu, a powerful state that existed between 1000 BC or earlier and 585 BC in the area centered on Lake Van in current Turkey.

The two extinct languages have been grouped into the Hurro-Urartian family. Diakonoff proposed the name Alarodian for the union of Hurro-Urartian and Northeast Caucasian.

The Proto-Northeast Caucasian language had many terms for agriculture, and Johanna Nichols has suggested that its speakers may have been involved in the development of agriculture in the Fertile Crescent.[27] They had words for concepts such as yoke, as well as fruit trees such as apple and pear that suggest agriculture was already well developed when the proto-language broke up.