The earliest evidence of the group is from Vedic and Mitanni-Aryan. Vedic has been used in the ancient preserved religious hymns, the foundational canon of Hinduism known as the Vedas. Mitanni-Aryan is of similar age to the language of the Rigveda, but the only evidence of it is a few proper names and specialized loanwords. Vedic Sanskrit is only marginally different from Proto-Indo-Aryan the proto-language of the Indo-Aryan languages.

In about the 4th century BCE, an artificial language based on Vedic, called "Classical Sanskrit" by convention, was codified and standardized by the grammarian Panini.

Outside the learned sphere of Sanskrit, vernacular dialects (Prakrits) continued to evolve. The oldest attested Prakrits are the Buddhist and Jain canonical languages Pali and Ardha Magadhi, respectively. By medieval times, the Prakrits had diversified into various Middle Indo-Aryan dialects. "Apabhramsa" is the conventional cover term for transitional dialects connecting late Middle Indo-Aryan with early Modern Indo-Aryan, spanning roughly the 6th to 13th centuries. Some of these dialects showed considerable literary production; the Sravakachar of Devasena (dated to the 930s) is now considered to be the first Hindi book.

The next major milestone occurred with the Muslim conquests on the Indian subcontinent in the 13th–16th centuries. Under the flourishing Turco-Mongol Mughal empire, Persian became very influential as the language of prestige of the Islamic courts due to adoptation of the foreign language by the Mughal emperors. However, Persian was soon displaced by Hindustani. This Indo-Aryan language is a combination with Persian, Arabic, and Turkic elements in its vocabulary, with the grammar of the local dialects.

The two largest languages that formed from Apabhramsa were Bengali and Hindustani; others include Sindhi Gujarati, Odia, Marathi, and Punjabi.

The Indo-Aryan languages of Northern India and Pakistan form a dialect continuum. What is called "Hindi" in India is frequently Standard Hindi, the Sanskrit-ized version of the colloquial Hindustani spoken in the Delhi area since the Mughals. However, the term Hindi is also used for most of the central Indic dialects from Bihar to Rajasthan. The Indo-Aryan prakrits also gave rise to languages like Sindhi, Gujarati, Assamese, Bengali, Odia, Nepali, Marathi, and Punjabi, which are not considered to be part of this dialect continuum.

In the Hindi-speaking areas, for a long time the prestige dialect was Braj Bhasha, but this was replaced in the 19th century by the Khariboli-based Hindustani. Hindustani was strongly influenced by Sanskrit and Persian, with these influences leading to the emergence of Modern Standard Hindi and Modern Standard Urdu as registers of the Hindustani language.[3][4] This state of affairs continued until the Partition of India in 1947, when Hindi became the official language in India and Urdu became official in Pakistan; because the basic grammar remains identical, the difference is more sociolinguistic than on actual language basis.[5][6][7]

Some theonyms, proper names and other terminology of the Mitanni exhibit an Indo-Aryan superstrate, suggest that an Indo-Aryan elite imposed itself over the Hurrian population in the course of the Indo-Aryan expansion. In a treaty between the Hittites and the Mitanni, the deities Mitra, Varuna, Indra, and Nasatya (Ashvins) are invoked. Kikkuli's horse training text includes technical terms such as aika (eka, one), tera (tri, three), panza (pancha, five), satta (sapta, seven), na (nava, nine), vartana (vartana, turn, round in the horse race). The numeral aika "one" is of particular importance because it places the superstrate in the vicinity of Indo-Aryan proper as opposed to Indo-Iranian or early Iranian (which has "aiva") in general [8]

Another text has babru (babhru, brown), parita (palita, grey), and pinkara (pingala, red). Their chief festival was the celebration of the solstice (vishuva) which was common in most cultures in the ancient world. The Mitanni warriors were called marya, the term for warrior in Sanskrit as well; note mišta-nnu (= miẓḍha, ≈ Sanskrit mīḍha) "payment (for catching a fugitive)" (M. Mayrhofer, Etymologisches Wörterbuch des Altindoarischen, Heidelberg, 1986–2000; Vol. II:358).

Domari is an Indo-Aryan language spoken by older Dom people scattered across the Middle East and North Africa. The language is reported to be spoken as far north as Azerbaijan and as far south as central Sudan, in Turkey, Iran, Afghanistan, Pakistan, India, Iraq, Palestine, Israel, Jordan, Egypt, Sudan, Libya, Tunisia, Algeria, Morocco, Syria and Lebanon.[9] Based on the systematicity of sound changes, we know with a fair degree of certainty that the names Domari and Romani derive from the Indo-Aryan word ḍom.[10]

Lomavren is a nearly extinct mixed language, spoken by the Lom people, that arose from language contact between a language related to Romani and Domari[11] and the Armenian language.

The Romani language is usually included in the Central Indo-Aryan languages.[12] Romani — spoken mainly in various parts of Europe — is conservative in maintaining almost intact the Middle Indo-Aryan present-tense person concord markers, and in maintaining consonantal endings for nominal case – both features that have been eroded in most other modern languages of Central India. It shares an innovative pattern of past-tense person concord with the languages of the Northwest, such as Kashmiri and Shina. This is believed to be further proof that Romani originated in the Central region, then migrated to the Northwest.

There are no known historical documents about the early phases of the Romani language.

Linguistic evaluation carried out in the nineteenth century by Pott (1845) and Miklosich (1882–1888) showed that the Romani language is to be classed as a New Indo-Aryan language (NIA), not Middle Indo-Aryan (MIA), establishing that the ancestors of the Romani could not have left India significantly earlier than AD 1000.

The principal argument favouring a migration during or after the transition period to NIA is the loss of the old system of nominal case, and its reduction to just a two-way case system, nominative vs. oblique. A secondary argument concerns the system of gender differentiation. Romani has only two genders (masculine and feminine). Middle Indo-Aryan languages (named MIA) generally had three genders (masculine, feminine and neuter), and some modern Indo-Aryan languages retain this old system even today.

It is argued that loss of the neuter gender did not occur until the transition to NIA. Most of the neuter nouns became masculine while a few feminine, like the neuter अग्नि (agni) in the Prakrit became the feminine आग (āg) in Hindi and jag in Romani. The parallels in grammatical gender evolution between Romani and other NIA languages have been cited as evidence that the forerunner of Romani remained on the Indian subcontinent until a later period, perhaps even as late as the tenth century.

There can be no definitive enumeration of Indic languages, because their dialects merge into one another. Named languages are therefore social constructs as much as objective ones. The major ones are illustrated here; for the details, see the dedicated articles.

The representative languages are: 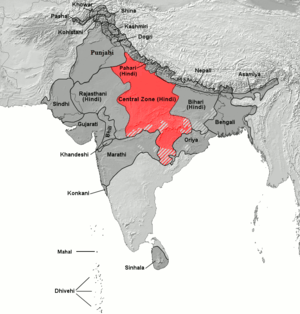 Domari–Romani and related Parya historically belonged to the Central Zone but lost intelligibility with other languages of the group due to geographic distance and numerous grammatical and lexical innovations.

This group of languages developed from Maharashtri. It is not clear if Dakhini (Deccani, Southern Urdu) is part of Hindustani along with Standard Urdu, or a separate Persian-influenced development from Marathi.

The insular languages share several characteristics that set them apart significantly from the continental languages.

The following languages are related to each other, but otherwise unclassified within Indo-Aryan:

The following other poorly attested languages are listed as unclassified within the Indo-Aryan family by Ethnologue 17:

The normative system of New Indo-Aryan stops consists of five points of articulation: labial, dental, "retroflex", palatal, and velar, which is the same as that of Sanskrit. The "retroflex" position may involve retroflexion, or curling the tongue to make the contact with the underside of the tip, or merely retraction. The point of contact may be alveolar or postalveolar, and the distinctive quality may arise more from the shaping than from the position of the tongue. Palatals stops have affricated release and are traditionally included as involving a distinctive tongue position (blade in contact with hard palate). Widely transcribed as [tʃ], Masica (1991:94) claims [cʃ] to be a more accurate rendering.

Moving away from the normative system, some languages and dialects have alveolar affricates [ts] instead of palatal, though some among them retain [tʃ] in certain positions: before front vowels (esp. /i/), before /j/, or when geminated. Alveolar as an additional point of articulation occurs in Marathi and Konkani where dialect mixture and others factors upset the aforementioned complementation to produce minimal environments, in some West Pahari dialects through internal developments (*t̪ɾ, t̪ > /tʃ/), and in Kashmiri. The addition of a retroflex affricate to this in some Dardic languages maxes out the number of stop positions at seven (barring borrowed /q/), while a reduction to the inventory involves *ts > /s/, which has happened in Assamese, Chittagonian, Sinhala (though there have been other sources of a secondary /ts/), and Southern Mewari.

Further reductions in the number of stop articulations are in Assamese and Romany, which have lost the characteristic dental/retroflex contrast, and in Chittagonian, which may lose its labial and velar articulations through spirantization in many positions (> [f, x]).

Sanskrit was noted as having five nasal-stop articulations corresponding to its oral stops, and among modern languages and dialects Dogri, Kacchi, Kalasha, Rudhari, Shina, Saurasthtri, and Sindhi have been analyzed as having this full complement of phonemic nasals /m/ /n/ /ɳ/ /ɲ/ /ŋ/, with the last two generally as the result of the loss of the stop from a homorganic nasal + stop cluster ([ɲj] > [ɲ] and [ŋɡ] > [ŋ]), though there are other sources as well.

The following are consonant systems of major and representative New Indo-Aryan languages, as presented in Masica (1991:106–107), though here they are in IPA. Parentheses indicate those consonants found only in loanwords: square brackets indicate those with "very low functional load". The arrangement is roughly geographical.