In one dimension (non-relativistic)

We begin with relative motion in the classical, (or non-relativistic, or the Newtonian approximation) that all speeds are much less than the speed of light. This limit is associated with the Galilean transformation. The figure shows a man on top of a train, at the back edge. At 1:00 pm he begins to walk forward at a walking speed of 10 km/hr (kilometers per hour). The train is moving at 40 km/hr. The figure depicts the man and train at two different times: first, when the journey began, and also one hour later at 2:00 pm. The figure suggests that the man is 50 km from the starting point after having traveled (by walking and by train) for one hour. This, by definition, is 50 km/hour, which suggests that the prescription for calculating relative velocity in this fashion is to add the two velocities.

The figure displays clocks and rulers to remind the reader that while the logic behind this calculation seem flawless, it makes false assumptions about how clocks and rulers behave. (See The train-and-platform thought experiment.) To recognize that this classical model of relative motion violates special relativity, we generalize the example into an equation:

is the velocity of the Man relative to Earth.

is the velocity of the Man relative to the Train.

is the velocity of the Train relative to Earth. 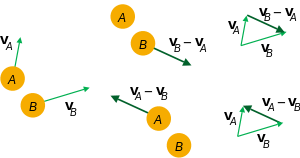 The figure shows two objects (A and B) moving at constant velocity. The equations of motion are:

where the subscript i refers to the initial displacement (at time t equal to zero). The difference between the two displacement vectors,

, represents the location of B as seen from A.

After making the substitutions,

Though easy to learn, this notation is unfortunately a bit cumbersome for lengthy calculations.

To construct a theory of relative motion consistent with the theory of special relativity, we must adopt a different convention. Continuing to work in the (non-relativistic) Newtonian limit we begin with a Galilean transformation in one dimension:[note 2]

where x' is the position as seen by a reference frame that is moving at speed, v, in the "unprimed" (x) reference frame.[note 3] Taking the differential of the first of the two equations above, we have,

, and what may seem like the obvious[note 4] statement that

To recover the previous expressions for relative velocity, we assume that particle A is following the path defined by dx/dt in the unprimed reference (and hence dx'/dt' in the primed frame). Thus

where the latter form has the desired (easily learned) symmetry.

As in classical mechanics, in Special Relativity the relative velocity

This peculiar lack of symmetry is related to Thomas precession and the fact that two successive Lorentz transformations rotate the coordinate system. This rotation has no effect on the magnitude of a vector, and hence relative speed is symmetrical.

In the case where two objects are traveling in parallel directions, the relativistic formula for relative velocity is similar in form to the formula for addition of relativistic velocities.

The relative speed is given by the formula:

In the case where two objects are traveling in perpendicular directions, the relativistic relative velocity

is given by the formula:

The relative speed is given by the formula

The general formula for the relative velocity

The relative speed is given by the formula