Esporte Clube Vitória, usually known simply as Vitória, is a Brazilian football team from Salvador in Bahia, founded on May 13, 1899. The team plays in the Campeonato Brasileiro Série A and the Campeonato Baiano, respectively top divisions of national and state football.

Vitória's home games are played at the club's own stadium, Manoel Barradas, capacity 35,632.[1] The team plays in red and black horizontal striped shirts, black shorts and black socks. The stripes have changed over time: they have been sometimes vertical, horizontal, wide and narrow.

The youth system of the club is one of the most successful of the world, holding, between 1995 and 2000, at its peak, at least 21 international titles.[2] Recent names that started playing in the club are Bebeto, Vampeta, Dida, Júnior, Hulk, David Luiz, Dudu Cearense, Marcelo Moreno, Gabriel Paulista and others.

The rivals of Vitória are Esporte Clube Bahia. Their matches are known as Ba–Vi ("Ba" from Bahia and "Vi" from Vitória). It is one of the most intense rivalries in the country.

The club was founded on May 13, 1899, by the brothers Artur and Artêmio Valente, along with seventeen other young fellows. They were from an old Bahia family, and discovered football during their studies in England. Initially Vitória was a cricket club, named Club de Cricket Victoria, because all of them lived at the Vitória neighborhood, in Salvador.

On May 22, 1901, Vitória played its first football match, at Campo da Pólvora, against International Sport Club, a team whose players were English seamen. Vitória beat International 3–2. Two months after that match, Vitória changed its original colors, which were black and white, to red and black, which are still in use. 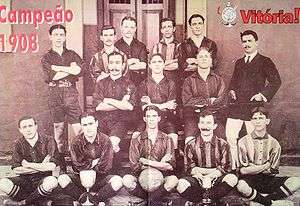 On September 13, 1903, Vitória beat a club formed by people from São Paulo state, São Paulo Bahia Football Club 2–0 in the club's first official match. In 1908, Vitória won its first title ever, the Campeonato Baiano. They won the next year as well.

In the 2000s, the Campeonato Baiano trophy was won by Vitória eight out of ten years.

The club's mascot is a lion named Lelê Leão (Lion), and according to Vitória's official site, his objective is to stimulate the club's supporters and players on match days.

Many kinds of shirts have been worn by Vitória's players over the years.