José Roberto Gama de Oliveira, known as Bebeto, (born February 16, 1964) is a former Brazilian football player who played as a striker. He entered politics in the 2010 Brazilian General Elections and was elected to the Legislative Assembly of Rio de Janeiro representing the Democratic Labour Party.

With 39 goals in 75 appearances for Brazil, Bebeto is the sixth highest goalscorer for his national team. He was the top scorer for Brazil at the 1989 Copa América as the nation went on to win the tournament. At the 1994 FIFA World Cup, he formed a formidable strike partnership with Romário to lead Brazil to a record fourth World Cup title. He was also a member of the Brazilian side that won the 1997 FIFA Confederations Cup, while he won Olympic silver and bronze medals with Brazil at the 1988 and 1996 Summer Olympic Games respectively. In 1989, Bebeto was named South American Footballer of the Year.

In January 2013 and August 2014, Bebeto was named as one of the six Ambassadors of the 2014 FIFA World Cup and Rio 2016 in Brazil, others being Ronaldo, Amarildo, Marta, Carlos Alberto Torres, Mário Zagallo. His son, Mattheus, is a professional footballer.[1]

Bebeto, who was born in Salvador, Brazil, started his career in 1983 with Vitória.

He played for Flamengo, Vasco da Gama, Cruzeiro and Botafogo in Brazil, Deportivo La Coruña and Sevilla in Spain, Toros Neza in Mexico, Kashima Antlers in Japan, and Al Ittihad in Saudi Arabia, finally retiring in 2002.

Bebeto spent four years in Spain at Deportivo La Coruña, scoring an impressive 86 goals in 131 games. Bebeto became the top scorer in La Liga in his first season at Deportivo, scoring 29 goals in the 1992–93 season. In the next season, 1993–94 season, Deportivo had the chance to win their first ever La Liga title by beating Valencia in the last match of the season. In a very evenly matched contest Deportivo had a golden opportunity to seal the victory and thus the league title. They were given a penalty kick just minutes from the end. The official penalty taker all season had been Bebeto (after Donato, who wasn't in the field), who this time, refused to take the penalty. Eventually, Miroslav Đukić took the penalty and failed (0-0), effectively handing Barcelona the title.

In 1996 Bebeto returned to play for native club Flamengo, but after just 15 games, Bebeto returned to Spain to play for Sevilla, for whom he never scored. In 1997, Bebeto joined Cruzeiro for just one match, the 1997 Intercontinental Cup final against Borussia Dortmund. Despite his presence, the Belo Horizonte side lost the match 2–0. Bebeto returned to goalscoring form at native clubs Victoria in late 1997 and Botafogo in early 1998, which saw him being picked for Brazil's World Cup defence in 1998.

In 2001, he was rejected by Scottish side St Mirren, who were willing to pay his wages but had reservations about his fitness.[2] On 5 September 2002, he joined his final club at the age of 38, Al-Ittihad of Saudi Arabia, after pledging to join Vasco da Gama on 28 August.[3]

For Brazil, Bebeto scored 39 goals in 75 caps after making his debut in 1985. He played in three World Cups: 1990, 1994, and 1998. In 1994, he was one of the best players of the tournament, scoring three goals for the eventual champions, and then repeated the feat four years later as Brazil finished second.

Bebeto became a household name for his goal celebration in the 1994 World Cup in the United States. His wife had delivered their third child just days before a quarter-final match against the Netherlands in the scorching heat of Dallas. After scoring, Bebeto ran to the sideline, brought his arms together and began rocking an imaginary baby. Teammates Romário and Mazinho quickly joined in. That child, a boy who was named Mattheus, now plays with the youth side of Brazilian club Flamengo.[4]

He won a Silver medal for Brazil in the 1988 Summer Olympics. He was later chosen to be an over-23 player at the 1996 Summer Olympics, scoring a hat-trick in the Bronze medal match against Portugal.

On December 8, 2012 a friendly match was played by Brazil Masters vs IFA All Stars at Salt Lake Stadium, Kolkata, India. Bebeto scored a goal for Brazil Masters as they defeated All Stars by 3–1.[5]

One of Brazil's greatest strikers, Bebeto was a prolific goalscorer and an excellent finisher, who was known for his consistency and determination throughout his career, although he was also injury-prone and was criticised for his character. Despite not being imposing physically due to his lack of height and slender physique, he was a fast and opportunistic player, who used his agility and intelligence to lose his markers in tight spaces. Due to his vision, outstanding technical skills, control, and his ability to play off other strikers and provide them with assists, he was often employed as a playmaking attacking midfielder or as a supporting striker early on in his career, drawing influence from Zico's playing style. He was later deployed as a striker or as a centre-forward, where he excelled, and remained in this position for the rest of his career.[6][7][8]

Bebeto was hired on December 16, 2009 as the América Football Club's head coach. After an average performance at the Taça Guanabara, he was sacked on February 13, 2010. He had a record of three wins, one draw and four losses.

Bebeto features in EA Sports' FIFA video game series; he was on the cover of certain editions of FIFA 97.[9] 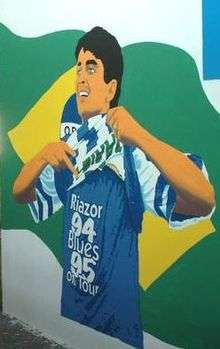 Mural of Bebeto in Riazor, stadium of Deportivo La Coruña.