Givanildo Vieira de Sousa (born 25 July 1986), known as Hulk (Brazilian Portuguese: [ˈhuwki]), is a Brazilian professional footballer who plays for Shanghai SIPG and the Brazil national team, as a forward, though he can also operate as a winger.

After starting out professionally with Vitória and playing three years in Japan, he went on to play several seasons in Portugal with Porto, winning ten major titles – including the 2010–11 UEFA Europa League and three national championships – and being crowned the league's top scorer once. In 2012, he joined Russian Premier League side Zenit Saint Petersburg for €60 million, winning all three domestic honours and being named the competition's best player and top scorer once each. He transferred for an Asian record €55.8 million to Shanghai SIPG in 2016.

Hulk made his international debut in 2009, and played for Brazil at the 2012 Summer Olympics as one of the three permitted overage players. He went on to represent the Brazilian senior team in their victory at the 2013 FIFA Confederations Cup and fourth-place finish at the 2014 FIFA World Cup.

He is described by FIFA's official website as "a direct powerhouse of a centre- or wide-forward who knows his way around the box".[3] He is strongly built for a footballer and acquired his nickname due to his likeness to the actor Lou Ferrigno who played the Incredible Hulk on the eponymous television show in the 1970s.[4]

Born in Campina Grande, Paraíba, Hulk started playing professionally with Esporte Clube Vitória in Salvador, Bahia, then went on loan to Japan to play for Kawasaki Frontale. Despite having been purchased months later, he was loaned to second division Consadole Sapporo, where he played all the 2006 season and scored 25 goals, one less than the top scorer.

In 2007, he was loaned again to a second division team, Tokyo Verdy, where he was even more effective, netting 37 goals in 42 games and being the top goalscorer of the season. He briefly returned to Kawasaki in 2008, but rejoined Verdy after only seventeen and a half matches.

After his stay in Japan, he moved to Portugal and signed for defending champions F.C. Porto, who bought 50 percent of the player's rights for €5.5 million, from Uruguayan side C.A. Rentistas,[5] with the transfer fee being received by an unnamed investor.

When Moroccan teammate Tarik Sektioui got injured, he was given an opportunity to play forward and netted his first official domestic league goal for Porto in a 2–0 home win against C.F. Os Belenenses, later adding against F.C. Paços de Ferreira (same venue and result), both as a second-half substitute. As the season advanced, he became an undisputed starter, forming an attacking trio with Cristian Rodríguez and Lisandro López, with the trio often shifting positions. After some stellar performances in the season's UEFA Champions League, he was elected as one of the Top 10 Rising Stars by UEFA.[6] In late August 2009, he extended his contract to June 2014, with a buy-out clause increased to €100 million.[7]

In the 2009–10 season, he established as an automatic first-choice. However, following a tunnel brawl during the league loss against S.L. Benfica (1–0) on 20 December 2009, he received a four-month ban (if the disciplinary hearing upheld the ban, he faced up to three years on the sidelines), only for the domestic competitions – as did his teammate Cristian Săpunaru.[8] The ban was later reduced to four matches, and the player returned to league action on 28 March 2010, scoring in a 3–0 win at Belenenses; one week later he also found the net, in a 4–1 home victory over C.S. Marítimo; with six less matches played than the previous season, he ended with five league goals. 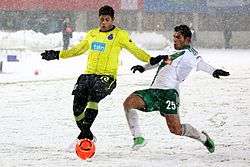 He started the 2010–11 season scoring sixteen times in his first sixteen official matches, including a hat-trick against K.R.C. Genk for the UEFA Europa League's play-off stage, on 26 August 2010 (4–2 home win, 7–2 on aggregate).[9] From September to January he won the Portuguese Championship Player of the Month, making him the only player to have won the award six times; on 7 November 2010 he scored the last two goals as Porto trounced Benfica 5–0 at home, creating a 10-point difference between the two teams,[10] with the northerners leading the league, and eventually winning it, with the player leading the goalscoring charts.

On 13 May 2011, Porto paid €13.5 million to Rentistas for another 40 percent of Hulk's sporting rights, bringing their total stake to 85% (Porto sold back 5% after renewing his contract in 2009), with the player signing a deal until 2016 and with a buy-out clause of €100 million.[11][12] He finished the season with 36 goals in 53 official games, with his team winning four major titles, including a league/cup double.

On 7 April 2012, he scored the solitary goal as Porto defeated S.C. Braga away to go four points clear at the top of the table.[13] He netted six goals in the following three matches – including a brace in a 2–0 home defeat of Sporting Clube de Portugal[14]– and finished the 2011–12 season with 16 league goals as his team won another national championship; in May 2012 he was voted the Player of the Month for April for a record sixth time,[15] and he added 11 assists (a competition best).[16]

On 3 September 2012, he completed a transfer of €60 million, with Porto receiving €40 million,[fn 1] to Russian Premier League club FC Zenit Saint Petersburg, reuniting with former Porto teammate Bruno Alves.[20] This transfer fee caused a lot of debate and a great stir since Mitrofanov, General director from Zenit denied publicly.[22] Russian media R-Sport even claimed that Mitrofanov had shown the media the sales contract and the fee on the contract was €40 million and not €60 million.[23][24] However Porto also confirmed in its unaudited quarterly report in Q1 2012–13, that, the club did not pay for third parties ownership (15%), agent fee nor solidarity contribution (5%), which all normally included in the transfer fee as in the case of Falcao.[25]

He scored his first goal for his new club in only his second league game, against FC Krylia Sovetov Samara, finding the net with a trademark shot from outside the box in a 2–2 away draw.[26]

In the second half of September, media speculation reported that teammates Igor Denisov and Aleksandr Kerzhakov were unsatisfied with Hulk's wage, and that they demanded renegotiation of their contracts. As a result, they were sent to the youth squad.[27][28] Denisov replied in an interview with Sport Express, stating that his stand-off with club management was over "the proper organisation of the team. And respect for the Russian players which Zenit has always relied upon.";[26] a few days after the feud, he scored and assisted in a 2–1 win against FC Baltika Kaliningrad for the fifth round of the Russian Cup. A few weeks later, he scored his first Champions League goal for Zenit and provided an assist in a 3–2 loss against A.C. Milan in the second matchday of group stage. 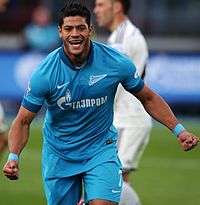 After falling out with coach Luciano Spalletti, he declared that he was seeking to leave the club in January, however FIFA regulations ban players from playing for more than two clubs in a season, forcing him to stay in Russia at least until June 2013.[29] Eventually, he revealed that he made amends with the club's management and that things have been resolved.[30] In a 3–1 loss against Ukrainian side Shakhtar Donetsk, he suffered a head injury after falling under a challenge and connecting his head with a Shakhtar defender's studs in the second half. He was then taken to a local Dubai hospital[31] Following Zenit's third-place finish in the Champions League Group Stage, the club entered into the Europa League. He scored a goal in each leg of Zenit's knockout phase match, to put English side Liverpool out of the Europa League in the round of 32 by away goals, despite losing 3–1 in the second leg.[32] On 4 May 2013, he scored his first hat-trick of his Zenit career and assisted a goal, in a 4–0 win over league strugglers Alania Vladikavkaz.[33]

Hulk was due to be an assistant at the draw for 2018 World Cup qualification in St Petersburg, but withdrew due to commitments with Zenit, being replaced by Alexey Smertin.[36]

On 30 June 2016, Hulk joined Chinese club Shanghai SIPG from Zenit for €55.8 million, an Asian football record. He will earn €384,000 per week, accumulating to €20 million a year.[39] On 10 July, Hulk forced Ryan McGowan's own goal nine minutes into his debut in a 5–0 win over Henan Jianye, however just 12 minutes later he was stretchered off with a muscle injury.[40][41] On 9 September, Hulk scored his first two goals for Shanghai SIPG against Beijing Guoan after a two-month injury lay-off.[42] 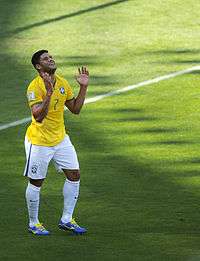 Hulk playing for Brazil at the 2014 FIFA World Cup.

Hulk made his debut for Brazil on 14 November 2009 in a friendly match against England in Doha, as the Seleção managed a 1–0 victory.[43] On 26 May 2012, he scored his first three international goals in a 3–1 win against Denmark at the Imtech Arena, in Hamburg, Germany.[44]

On 9 June 2012, in a friendly with Argentina, Hulk scored in a 3–4 loss.[45] In July he was named as one of three overaged players for Mano Menezes's Brazilian squad for the 2012 Summer Olympics in London,[46] and he appeared in all the games but one during the tournament, netting in the 1–2 final loss against Mexico.[47]

In June 2013, he represented Brazil at the 2013 FIFA Confederations Cup. He played in every match as the team's starting right-winger, including the final, where Brazil beat world champions Spain to win its fourth Confederations Cup title.

At the 2014 FIFA World Cup, in the Round of 16 match against Chile in Belo Horizonte, he had a goal disallowed for handball. In the shootout, he had his penalty saved by Claudio Bravo, although Brazil advanced nonetheless.[48]

Goals in the Summer Olympics