Ethiopian Semitic (also known as Ethiosemitic or Ethiopic, or in the past as Abyssinian[2][3]) is a language group, which forms the Western branch of the South Semitic languages. The Ethiopian Semitic languages are spoken in both Eritrea and Ethiopia, and one of these idioms, the Tigre language, is spoken in both Eritrea and Sudan. Some linguists have begun calling this group "Afro-Semitic" to avoid the exclusive focus on Ethiopia.[4][5] However, this usage is not widespread.

The division into Northern and Southern branches was established by Cohen (1931) and Hetzron (1972) and garnered broad acceptance, but this classification has recently been challenged by Voigt.[6] 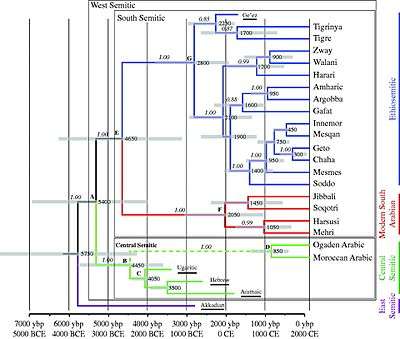 Genealogy of the Ethiopian Semitic languages