The Ethiopian Catholic Church is a Metropolitan sui iuris Eastern particular Church within the Catholic Church. Established in 1930, its membership includes inhabitants of Ethiopia.

Ge'ez, a Semitic language fallen out of daily use several centuries ago, is the liturgical language of the Ethiopic Orthodox Church. The Church's liturgy is based on that of the Coptic Church.

The term "Ethiopic Catholic Church", which was synonymous with "Ethiopian Catholic Church" until January 2015, when the Eritrean Catholic Church was established, can be applied to either church or to both jointly, since their liturgy is celebrated in the Ethiopic or Ge'ez language.

The Portuguese voyages of discovery opened the way for direct contacts between the Catholic Church and the Ethiopian Orthodox Church. In the 14th century, Catholic missionaries arrived in Ethiopia. On August 28, 1439, Pope Eugene IV sent a message of unity with the Catholic Church to Ethiopian Emperor Constantine I but this effort was unsuccessful.[5]

With Islamic attacks up to 1531 threatening Christian Ethiopia, an appeal from the Emperor to the Portuguese brought support to defeat the Adal Sultanate in the Ethiopian–Adal War. Jesuit missionaries came with the Portuguese to Ethiopia. These missionaries focused their conversion activities with the country's governing class including the Emperor to have the Ethiopian Orthodox Church unite with the Catholic Church. The Emperor Susenyos was converted primarily by Father Pedro Páez. In 1622, Susenyos made Catholicism the state religion. The next year, Pope Gregory XV named Afonso Mendes, a Portuguese Jesuit, Patriarch of the Ethiopian Church. A formal union in 1626 was declared when Patriarch Mendes came to the country. With Mendes trying to Latinize the Ethiopian church, Susenyos used force to impose the latinization. Public backlash resulted. In 1632, Susenyos died. His successor Fasilides in 1636 removed Mendes from the country, ended the union with Rome and removed or killed the remaining missionaries. For the next 200 years, Ethiopia was closed to Catholic Missions.[5]

In 1839, Italian Lazarists and Capuchins resumed, albeit within certain limitations imposed due to strong public opposition. That same year, Justin de Jacobis was appointed first Prefect Apostolic of Abyssinia and entrusted with the foundation of Catholic missions in that country. After laboring with great success in Abyssinia for eight years, he was made titular Bishop of Nilopolis in 1847, and shortly afterwards Vicar Apostolic of Abyssinia, but he refused the episcopal dignity until it was finally forced upon him in 1849.[6]

In 1889, Emperor Menelik II assumed the throne and allowed access for the Catholic missionaries. With the conquest of Ethiopia in the Second Italo-Abyssinian War by Italy, missionary work increased in the country similar to Eritrea already under Italian control since 1889.[5]

In 1919, the Pontifical Ethiopian College was founded with the Vatican walls by Pope Benedict XV with St. Stephen’s Church, behind St. Peter’s Basilica, as the designated church for the College.[1]

The Latin Church had become established in the south of Ethiopia in areas that had not been Christian and that were incorporated into the modern country only at the end of the 19th century. The Italian occupation of Ethiopia in 1936 gave rise to an increase in the number of Latin Church jurisdictions, but the expulsion of foreign missionaries at the end of the Second World War meant that the Ethiopic Rite clergy had to take responsibility for areas thus denuded of Catholic clergy. Accordingly, in 1951, the Ethiopic Rite Apostolic Exarchate of Addis Ababa was established, and the ordinariate for Eritrea was elevated to the rank of exarchate. Ten years later, on February 20, 1961, an Ethiopic ecclesiastical province was established, with Addis Ababa as the Metropolitan See[2] and Asmara (in Eritrea) and Adigrat (in Ethiopia) as suffragan eparchies.[5] 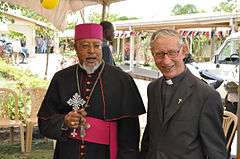 Metropolitan Archbishop of Addis Abeba Mons. Berhaneyesus Souraphiel (left) in the inauguration of a medical-aid program with an Italian priest

In 1995, two new eparchies, Barentu and Keren, were established in Eritrea,[4] and the Latin Church apostolic vicariate was abolished. Eritrea thus became the only country where all Catholics, whatever Church of their canonical ascription, belong to an Eastern Catholic jurisdiction.[1] In 2003, one more eparchy was created in Endibir in the Southern Nations, Nationalities and Peoples' Region of Ethiopia.[2]

There are also Latin Church jurisdictions in the south of Ethiopia, none of them raised to the rank of diocese. Five are apostolic vicariates and two are apostolic prefectures.[1]

Differences between the Catholic and Orthodox Ethiopian Churches

Other distinctions between the Orthodox and Catholic Ethiopian Churches include certain points of doctrine regarding the sacraments and the use of the Catholic canon of Scripture. Also, the order of the diaconate is reserved for adult men in the Catholic Church, whereas boys are commonly ordained in the Ethiopian Orthodox Church. Ethiopian Catholic clergy also tend to dress in the Roman cassock and collar, distinct from the Ethiopian Orthodox custom. There are also doctrinal differences between the two churches.