The Eritrean Catholic Church is a Metropolitan sui iuris Eastern particular Church headquartered in Asmara, Eritrea. Established in 2015, it is in full communion with the Catholic Church. Its liturgical rite is the Alexandrian Rite.

Like the other Eastern Catholic Churches, the Eritrean Catholic Church is in full communion with the Holy See. It holds the Christological doctrine of the Council of Chalcedon and accepts the universal jurisdiction of the Pope. These points distinguish it from Eritrean Orthodox Tewahedo Church, the Oriental Orthodox church comprising most Christians in the country. Like the Eritrean Orthodox, the Eritrean Catholic Church follows the Ethiopic liturgical rite. Ge'ez, a Semitic language fallen out of daily use several centuries ago, is the liturgical language of the Ethiopic Rite, whose liturgy is based on the Coptic.

From the time of the Crusades, the Catholic faith in the entire Middle East was supervised by bishops of the Roman Catholic Church based in Constantinople, the capital of the Ottoman Empire. During the 19th century, the Holy See gradually established more local Apostolic Vicariates, focusing more on individual populations.

In 1890, Eritrea was annexed by Italy and made a colony of the Kingdom of Italy, which promoted the Catholic faith among the local population. In 1894, a Prefecture Apostolic was established for Eritrea, under the authority of the Apostolic Vicariate of Abyssinia (Ethiopia). Missionary work in the region was carried out primarily by Capuchin friars from Italy. The majority of the faithful had previously been members of the Eastern Orthodox Patriarchate of Alexandria, and kept the rites of that Church in the ancient liturgical language of Ge'ez.<ref name=Chronology /[2]

Eritrea was raised by the Holy See to the status of Apostolic Vicariate in 1911. In its place, however, a Latin Church Ordinariate of Eritrea was established on 4 July 1930, to which all Catholics were made subject, regardless of the Church to which they were canonically ascribed.[3] Bishop Kidanè-Maryam Cassà was appointed as the first Ordinary, with the title Vicar Apostolic. In the early 1940s, Catholicism was the religion of nearly 28% of people in the colony of Italian Eritrea.[4]

Cassà was succeeded in 1951 by Bishop Ghebre Jesus Jacob. In October of that same year, the Ordinariate was abolished by Rome and in its place was created the new Apostolic Exarchate of Asmara, under the Ethiopian Catholic Church. The Cathedral of St. Joseph in Asmara was made the seat of the new exarchate. In 1959, a separate Apostolic Vicariate was established for those residents who were Roman Catholics, mostly Italian expatriates who had stayed after the transfer of Eritrea by Italy to the Ethiopian Empire in 1947. The exarchate was raised to the rank of an eparchy as of 20 February 1961.[3]

The ecclesiastical consequence of this was that, after Eritrea achieved independence in May 1993, Pope John Paul II created two additional eparchies, with seats in Keren and Barentu. The Apostolic Vicariate for Roman Catholics was abolished and they were placed under the jurisdiction of the local Eritrean bishops.[3] Pope Benedict XVI created a fourth eparchy based in Segeneiti on 24 February 2012, with territory taken from the then Eparchy of Asmara.[5] 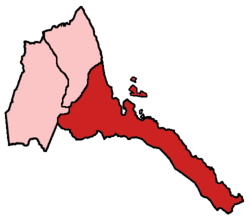 The three eparchies of Eritrea before 2012. In red the former Asmara eparchy, now divided between the Asmara and Segeneiti eparchies

There are four territorial jurisdictions in the country, known as eparchies.[6]

In 1995, when two new eparchies, Barentu and Keren, were established in Eritrea, the Latin Church apostolic vicariate was abolished. Eritrea thus became the only country where all Catholics, whatever their personal canonical ascription, belong to an Eastern Catholic jurisdiction. The nation still has Latin Church Catholics, most of whom are Italian Eritreans. However, after the abolishing of the vicariate, their spiritual care is entrusted to the Eritrean Catholic Church. When Eritrea was an Italian colony, all the Italians (colonists and military troops) belonged to the Latin Church: in 1940 they were 11% of the total population. As of 2010 there were 900 Italian Eritreans, mostly elderly.