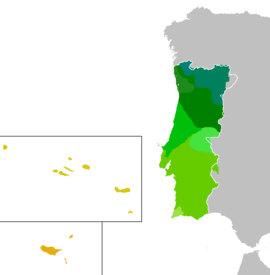 European Portuguese is divided into Northern and Southern varieties. The prestige norms are based on two varieties: that of Coimbra and that of Lisbon.[2][3]

Phonetically, differences emerge within Continental Portuguese. For example, in northern Portugal, the phonemes /b/ and /v/ are less differentiated than in the rest of the Portuguese speaking world (similar to the other languages of the Iberian peninsula). Another regionalism can be found in the south with the use of the gerund in the present progressive tense rather than the infinitive.

Portuguese is spoken by a significant minority in Andorra and Luxembourg. The Principality of Andorra has shown interest in membership in the Community of Portuguese Language Countries (CPLP). There are also immigrant communities in France and Germany.

The Galician language, spoken in the Autonomous Community of Galicia in Spain, is very closely related to Portuguese. There is, as yet, no consensus among writers and linguists on whether Galician is a variety of Portuguese or a distinct yet closely related language.

Galicia has expressed interest in joining the CPLP as an associate observer pending permission from the Spanish government.

Portugal maintained its colonial rule over its Old World empire much longer than it did over Brazil. Thus European Portuguese is used as a norm of reference for African and Asian Lusophone countries (Angola, Cape Verde, East Timor, Guinea-Bissau, Macau, Mozambique, and São Tomé and Príncipe). Portugal remains a destination for post-secondary education for the elites of these places. In Europe, European Portuguese remains the learning standard for Portuguese as a second language.

The Instituto Camões is an organization which promotes not only the Portuguese language but also Portuguese culture. Thus, it promotes European Portuguese as a norm for learners.

RTP is the Portuguese public television network and also serves as a vehicle for European-Portuguese-providing media content throughout the world. There is a branch of RTP Internacional named RTP África, which serves Lusophone Africa.

In estimating the size of the speech community for European Portuguese, one must take into account the consequences of the Portuguese diaspora: immigrant communities located throughout the world in the Americas, Australia, Europe and Africa.