Rhaeto-Romance, or Rhaetian, is a traditional subfamily of the Romance languages that is spoken in north and north-eastern Italy and in Switzerland. The name "Rhaeto-Romance" refers to the former Roman province of Rhaetia. The linguistic basis of the subfamily is discussed in the so-called Questione Ladina. 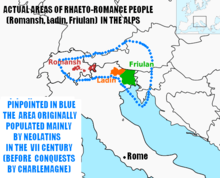 Contraction of the area of the Rhaeto-Romance languages

The area where Rhaeto-Romance languages (also called Ladin languages in a wider sense, not to be confused with Judaeo-Spanish) were spoken during the Middle Ages stretched from Switzerland to the Julian Alps (in modern-day western Slovenia).

The Rhaeto-Romance languages can be distinguished into the following varieties:[1]

A phylogenetic classification[2] using basic lexicon identifies a primary split between Romansh in Switzerland and Ladin in Italy. One secondary split distinguishes Engadinic from the other Romansh varieties in Switzerland. In Italy, another secondary split is evidently caused by the Dolomite mountain range that divides Ladin into a northern and a southern subbranch, with Friulian being grouped closest to the southern branch.

In this study, the divergence of the Rhaeto-Romance languages from their reconstructed lexical ancestor is about 7% on average. This would correspond to a time depth of about 500 years if the glottochronological replacement rate of 14% per millennium for Romance were trustworthy. However, the earliest available Romance text from the Alpine area is somewhat older and dates to AD 1200.[3]