FamilyMart is owned and overseen by FamilyMart Company, Limited. The main shareholder is Itochu with a stake of 35.55%.[5] Its headquarters is on the 17th floor of the Sunshine 60 building in Ikebukuro, Toshima, Tokyo.[6] 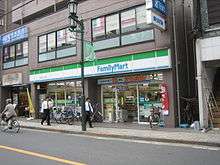 The first FamilyMart opened in Sayama, Saitama Prefecture in 1973.[7]

In November 2010, FamilyMart announced it would freeze the number of locations in the United States to 10 stores due to the difficult economic environment. However, operations in certain parts of Asia, especially China, continue to expand.[9] 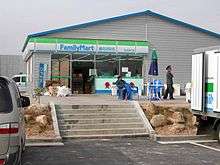 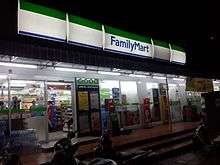 A Family Mart store at Beach Road, Pattaya in Thailand

CU (former South Korean FamilyMart stores) had a total of 7,950 stores nationwide in 2013.[13] The motto is "Convenience for you". There is only one FamilyMart in North Korea, in the North and South Korean-operated Kaesong Industrial Park. North Koreans are prohibited from shopping there, and it is only open to South Korean workers in the industrial park

FamilyMart was launched in the Philippines on April 7, 2013[14] under the ownership of Ayala Corporation, Rustan's Group and Itochu.[15][16][17] Its first Philippine branch, opened on April 22, 2013, is located at the Glorietta 3 mall in Makati. 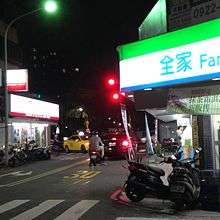 A Taiwan FamilyMart is on the right, while another convenience store is right across the street.

Beginning in July 2005, FamilyMart began building and opening several stores in Los Angeles, California, the first of 250 planned for the United States by 2009. The North American brand name is "Famima!!".

Only 9 stores operated at the peak of business, and the company withdrew from the US market in 2015, shuttering the remaining 8 open stores.[19]

FamilyMart has had solar power at some of its stores since at least 2004.[20] It aims to increase its solar energy footprint in the future. There are around 45,000 convenience stores in Japan. Lawson run just under 10,000, a market share just behind 7-Eleven, who have about 13,000 stores. Currently, only 20 of Lawson's stores are equipped with solar equipment, but they plan to expand that number ahead of the 1 July 2012 introduction of a "feed-in tariff system", which the government and electricity companies say guarantees purchases of electricity from renewable sources such as solar or wind generators. Surplus power can be sold only after in-store lighting and air-conditioning have been powered.[21]

On 30 January 2006, FamilyMart began trials of an automatic cashier station at one of its Tokyo stores in cooperation with Itochu and Toshiba. Special tags on items in the customer's shopping basket are remotely and instantly sensed at the register.

Seventeen convenience store owners of FamilyMart stores formed a union and requested collective bargaining with the company. They were refused and sued. In April 2015 the Central Labor Commission of Japan found that FamilyMart had violated the Trade Union Law by refusing to negotiate with the union. The franchise owners were recognized as employees under the trade union law, and the company was ordered to pledge to the union that it would not to repeat the offence.[22][23]