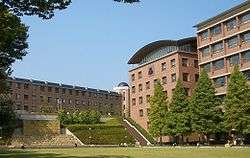 Kansai University was founded as Kansai Law School in November 1886, in Osaka. Its founders were six judicial officers who were in the service of the then Osaka Court of Appeal. 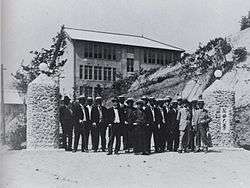 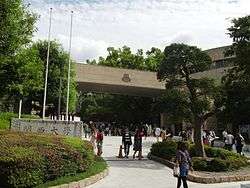 The main gate of Kansai University

In the early 1870s, the Ministry of Justice established its own law school. Western legal concepts, including that of human rights, were introduced into Japan by distinguished foreign scholars engaged by the Ministry. The founders of Kansai Law School had all studied at this law school, under the French jurist Boissonade de Fontarabie.[1] The idea of individual rights and legal processes independent of central governmental control were new to Japan. Long after the conclusion of their study with Dr. Boissonade, the founders continued to feel that these concepts were vital to the new Japan. They saw it as their duty to popularize jurisprudence to spread throughout the nation two notions: that of an independent judiciary and that of human rights.

From this sense of mission sprung the idea of founding a law school. They then sought and received the assistance and cooperation of Kojima Korekata,[2] their superior (and later Chief Justice of Japan's Supreme Court), and Doi Michio, president of the Osaka Chamber of Commerce and Industry.

Thus Kansai Law School was the first law school in Osaka. The founders taught that the law belongs to all citizens and, that by means of the law, they can and should defend their own rights. This became the origin of the university's academic tradition of nurturing a love of justice and a concern for the protection of the freedom of the individual. Thanks to the support and trust it has won from the general public, the institution has since then steadily developed and diversified.

In 1905 the institution was renamed as 'Private Kansai University', then in 1920 as 'Kansai University' before finally in 1922 being granted the official status of a university. Also in 1922 its main campus was moved to its present more extensive site in Suita (a suburb of Osaka), thus paving the way for later growth. In consequence of the educational reforms carried out soon after the end of the Second World War, Kansai University was able to avail itself of the new system to expand its scope for tuition so as to comprise four faculties: those of Law, Letters, Economics and Commerce.

Its first graduate school was established in 1950. Its Faculty of Engineering was founded in 1958, followed in 1967 by the founding of its Faculty of Sociology. In 1994 in response to the requirements of modern technology and communication, the Informatics faculty was instituted on another campus, created just outside the dormitory-town of Takatsuki. Its Institute of Foreign Language Education and Research was inaugurated in 2000.

For many decades, the evening courses were taught on a separate campus, in the Tenroku area of Osaka. These originally constituted a night school for students, many of them working adults. In 1994 the evening course was moved to the Senriyama campus; in 2003, the university instituted an innovative 12-hour curriculum, integrating both day and evening courses. 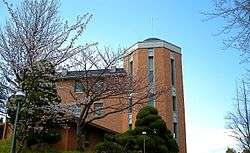 The university, with its attached senior and junior high schools and kindergarten, has a total student body of 27,000. In 2016, Kansai University celebrated the 130th anniversary of its foundation.[3]

Most of Kansai University is on an 86.486-acre[4] campus on the Suita in the northeast part of Osaka. Today, the campus includes 50 buildings and sculpture gardens, fountains, museums, and a mix of architectural styles. Senriyama campus is in the residential area which part of Hanshinkan Modernism cultural area. 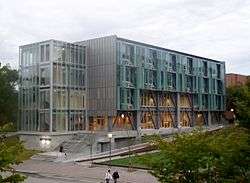 Center For Innovation And Creativity

Kansai University Museum began in 1954 with a donation of objects from a scholar and statesman Kanda Takahira(1830-1898). The museum has three gallery floors and approximately 15,000 objects of archaeological, historical, ethnological, and art-craft contexts, as well as some important cultural property. Designed by the acclaimed architect Togo Murano (1891–1984), the building was listed in the Registration tangible cultural property in 2007. The building served as the main library of the Kansai University until the construction of General Library in 1985. Its most famous object is Takamatsuzuka Tomb. The museum sponsors lectures and events, and also runs an extensive program of outreach to local schools.

Of those accepted for admission to the undergraduate Class of 2018, 39 percent are female.

The athletic teams at Kansai University are known as the Kaisers and are primarily members of the Kansai Big 6. The Kansai-Kwansei Gakuin rivalry is a college rivalry between two universities located in Kansai, Japan.

Kansai University is one of the most prestigious universities in Japan today, with particularly strong influence in the Kansai region. The university seeks to promote student and faculty exchange as well as collaborative research through memorandums of agreement signed with 133 partnership universities in 36 countries. For a question which university want to enter to 9,117 Japanese high school students, Recruit company graded Kanai university the 1st place, and the order is the same for past 9 years.[15]

The number of applicants per place was 20.02% (86,753/ 17,593) in the 2013 undergraduate admissions.This number of applicants was 6th largest in Japan.Its entrance difficulty is also very selective.[16]Nikkei BP has been publishing a ranking system called "Brand rankings of Japanese universities" every year, composed by the various indications related to the power of brand, and Kansai University was top in 4th in 2015 in Kansai Area.[17]

Kansai University is renowned for its strong connection to business in the Kansai region, and according to the 2016 university rankings by Toyo Keizai, 351 alumni served as executives in listed companies. As of 2016, around 20.6% of undergraduates were able to enter one of the top 400 companies in Japan.[18]