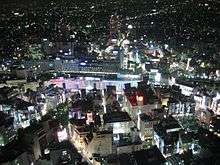 Ikebukuro Station as seen from the Sunshine 60 building 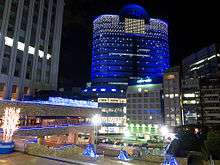 At the center of Ikebukuro is the train and subway station, a huge urban gathering shared by the JR East lines, the Seibu Ikebukuro Line and the Tōbu Tōjō Line. It is one of the main commuter hubs in the western Yamanote area of Tokyo. Ikebukuro Station is the third busiest station in Japan, and the world.[1]

Around the station are the Seibu and Tōbu department stores. Seibu, written with the characters for "West" and "Musashi (province)" 西武, is on the east end of the station and Tōbu, written with the characters for "East" and "Musashi" 東武, is on the west end. East of the station, on the site of Sugamo Prison, stands Sunshine 60, which was Tokyo's tallest building at the time of its construction. The Sunshine 60 contains a large and popular shopping mall, which contains various attractions including an aquarium, a Pokémon Center, and cat cafes. Adjacent to Sunshine City, on Meiji-Dori, is the Toyota Amlux Building which houses the Toyota showroom. Otome Road, a leading shopping area for otaku products aimed at women, is located nearby. Marui and Don Quijote also have department stores in the area. The principal electronics retailer in Ikebukuro is Bic Camera. There is a small pleasure district located in Nishi-Ikebukuro, similar to Shinjuku's Kabukichō.

The old village of Ikebukuro stood to the northwest of the station. Most of the area on which modern Ikebukuro is built was historically known as Sugamo. In the Taishō and Shōwa periods, the relatively low land prices attracted artists and foreign workers, who lent a somewhat cosmopolitan atmosphere to Ikebukuro. Until October 1, 1932 when Toshima ward was established, the area was an independent municipality of Ikebukuro-mura (池袋村).

The kanji for Ikebukuro literally means pond bag. Outside the west exit of Ikebukuro station near an entrance to the Fukutoshin Line is a small plaque explaining how the area used to have multiple lakes, hence the name.

There is a small statue of an owl located near the center of the city called Ikefukurō-zō (いけふくろう像), meaning pond owl statue. It is a play on words from the alternative meaning of "fukuro" as "owl" (although owl is pronounced with a long final "oh", rather than a short "o" in the word "fukuro" for bag). The owl statue has become a famous meeting place along the lines of the statue of Hachikō located outside of Shibuya Station.

Ikebukuro is home to many ethnic Chinese who arrived in the 1980s, leading to a variety of Chinese goods and services being provided in the district, which are popular among tourists interested in Chinese culture. However, the Ikebukuro Chinatown is smaller and less populous than Yokohama's Chinatown just to the south of Tokyo.[2]

Rikkyo Ikebukuro Junior and Senior High School is in the area.

The Kyokuto-kai designated yakuza syndicate is headquartered in Ikebukuro.[3]