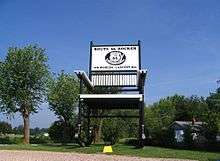 A post office called Fanning was established in 1887, and remained in operation until 1953.[2] Fanning is named for John Fanning (1821-1906), originally of Limerick, Ireland.[3] John Fanning was the founding railway section foreman beginning in the mid-19th century when the St. Louis-San Francisco Railway (Frisco) was first built through the region.[3] His home, which still stands in Fanning, was for many decades the railway station, church, post office, and social center of the community.[3] Fanning descendants still live in Fanning and the surrounding area.