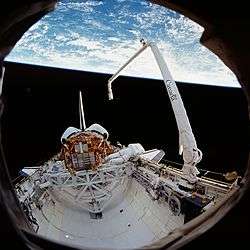 The "Canada" wordmark on the Canadarm

In 1969, the Official Languages Act was established to ensure the equality of English and French in all federal jurisdictions. That same year, a task force found that the Canadian government was conveying a confused image to the populace through a hodge-podge of symbology and typefaces (fonts). In 1970, the FIP was created to standardize a corporate identity for the Canadian government.

There are three basic components of the Federal Identity Program: the Canada wordmark and two corporate signature types with national symbols and bilingual titles, all of which are rendered consistently.

The Canada wordmark is mandatory on virtually all of the applications mentioned above. Established in 1980, the Canada wordmark is essentially a logo for the government of Canada: it consists of the word "Canada" written in a serif font, a modified version of Baskerville, with a Canadian flag over the final 'a'. In a 1999 study commissioned by the federal government, 77% of respondents remembered seeing the Canada wordmark at some point in the past.[2] Television viewers may be familiar with the logo from seeing it in the credits of Canadian television programs, where it is used to indicate government funding or tax credits.

There exist two basic types of FIP corporate signatures, each having a bilingual title and one of two symbols. The title is rendered in one of three typefaces of the sans serif Helvetica family, selected for its simplicity and modernity.

Certain federal entities were listed as exempt from FIP in the 1990 FIP Policy: