Saint Fermin of Amiens (also Firmin, from Latin, Firminus; in Spanish, Fermín; in Basque, Fermin) is one of many locally venerated Catholic saints. Fermin is the co-patron of Navarre, where his feast, the 'San Fermín' in the capital Pamplona, is forever associated with the 'Running of the Bulls' made famous by Ernest Hemingway. Fermin is also venerated at Amiens, where he met martyrdom.

Fermin is said to have been the son of a Roman of senatorial rank in Pamplona in the 3rd century, who was converted to Christianity by Saint Honestus, a disciple of Saint Saturninus. According to tradition, he was baptised by Saturninus (in Navarra "San Cernin") at the spot now known as the Pocico de San Cernin, the "Small Well of San Cernin", across from the facade of the church dedicated to St Cernin, which is built on the foundations of a pagan temple.[1]

Saturninus (in France "Saint Saturnin") was the first bishop of Toulouse, where he was sent during the "consulate of Decius and Gratus" (AD 250). He was martyred (traditionally in 257 AD), significantly by being tied to a bull by his feet and dragged to his death, a martyrdom that is sometimes transferred to Fermin and relocated at Pamplona. In Toulouse, the earliest church dedicated to Notre-Dame du Taur ("Our Lady of the Bull") still exists, though rebuilt; though the 11th century Basilica of Saint Sernin, the largest surviving Romanesque structure in France, has superseded it, the church is said to be built where the bull stopped, but more credibly must in fact be on a site previously dedicated to a pre-Christian sacred bull, perhaps the bull of Mithras. The street, which runs straight from the Capitole, is named, not the Rue de Notre-Dame, but the Rue du Taur.

Fermin was ordained a priest in Toulouse, according to the local legend, and returned to Pamplona as its first bishop.[2] On a later voyage preaching the gospel, Fermin was beheaded in Amiens, France.[1] He died on September 25, AD 303. In Legenda aurea several miracles attended the discovery and translation of the relics of Saint Fermin in the time of Savin, bishop of Amiens (traditionally ca 600). A sweet odor arose from his grave. The smell caused ice and snow to melt, flowers to grow, the sick to be cured, and trees to be inclined reverently toward the saint.[3] 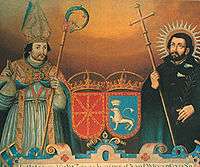 Baroque-era depiction of Saint Fermin (left) and Saint Francis Xavier, principal co-patrons of the Kingdom of Navarre. The coat of arms of Navarre and Pamplona are also visible.

Besides Pamplona, San Fermín is venerated in other places in Navarre, such as Lesaka, in the fiesta called the Regata del Bidasoa. In the village of San Fermín de Aldapa, the martyrdom of Saint Fermin is still commemorated on September 25. On the preceding Thursday to Sunday there are numerous festivities there, in the Navarrería and near the Cathedral. Celebrations begin with a firework rocket set off by a youngster from the Navarrería, who has been given the title of the little mayor. As at Pamplona, the celebrations have a special closing ceremony called Pobre de Mí (Poor Me).

When certain relics of the saint were brought back to Pamplona in 1196, the city decided to mark the occasion with an annual event. Over the centuries, the saint's festival, the ancient annual fair and the running of the bulls and subsequent bullfights have all melded together.

The cult of St Firmin was of great religious and economic importance to Amiens during the Middle Ages and into modern times. Legends grew up to explain the discovery of the saint's relics, most of which were held at Amiens. He is represented in a number of major works of art in Amiens Cathedral.

There is a mysterious well of an otherwise unknown "Saint Farmin" at Bowes, Yorkshire, England. The existence of a monastery named after a Saint Firmin in North Crawley was recorded in the Domesday Book (i.149a); there was a holy well in the churchyard,[4] and unauthorized pilgrimages there were suppressed in 1298.[5] The church at Thurlby, Lincs is dedicated to St Firmin. The only other St. Firmin in England rested at Thorney, Cambridgeshire. These occurrences point towards possible veneration of Firmin in Anglo-Saxon England.

The San Fermin festival is celebrated in Pamplona, in the region of Navarre, every year from the 6th to the 14th of July. It has become internationally known because of the running of the bulls, where the bulls are lead through the streets of the old quarter as far as the bull ring by runners. The fiestas are celebrated in honor of San Fermin, patron saint of Navarra, although the religious aspect would seem to have taken on a secondary role over the last number of years.

The funeral monument of Adrien de Henencourt, head of the chapter of Amiens Cathedral in the early 16th century, depicts not only the life and martyrdom of the saint, but also the posthumous history of his body, in a series of polychrome reliefs and statuary.