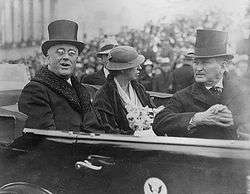 Roosevelt next to wife and Joseph Robinson

The first inauguration of Franklin D. Roosevelt as the 32nd President of the United States was held on Saturday, March 4, 1933. The inauguration marked the commencement of the first four-year term of Franklin D. Roosevelt as President and John Nance Garner as Vice President. It was the last inauguration to be held on the prescribed date of March 4; under the terms of the Twentieth Amendment, all subsequent inaugurations have taken place on January 20. The inauguration took place in the wake of Democrat Roosevelt's landslide victory over Republican incumbent Herbert Hoover in the 1932 presidential election. With the nation in the grip of the Great Depression, the new president's inaugural speech was awaited with great anticipation. Broadcast nationwide on several radio networks, the speech was heard by tens of millions of Americans, and set the stage for Roosevelt's urgent efforts to respond to the crisis.[1]

The swearing-in ceremony took place on the East Portico of the United States Capitol, with Chief Justice Charles Evans Hughes administering the oath of office. Roosevelt wore a morning coat and striped trousers for the inauguration, and took the oath with his hand on his family Bible, open to I Corinthians 13. Published in 1686 in Dutch, it remains the oldest Bible ever used in an inaugural ceremony, as well as the only one not in English, and was used by Roosevelt for his 1929 and 1931 inaugurations as Governor of New York as well as for his subsequent presidential inaugurations.[2]

After taking the oath of office, Roosevelt proceeded to deliver his 1,883-word, 20 minute-long inaugural address, best known for his famously pointed reference to "fear itself" in one of its first lines:

So, first of all, let me assert my firm belief that the only thing we have to fear is...fear itself — nameless, unreasoning, unjustified terror which paralyzes needed efforts to convert retreat into advance. In every dark hour of our national life a leadership of frankness and of vigor has met with that understanding and support of the people themselves which is essential to victory. And I am convinced that you will again give that support to leadership in these critical days.

Addressing himself to the causes of the economic crisis and its moral dimensions, Roosevelt placed blame squarely on the greed and shortsightedness of bankers and businessmen, as seen in the following excerpts:

...rulers of the exchange of mankind's goods have failed through their own stubbornness and their own incompetence, have admitted their failure, and have abdicated. Practices of the unscrupulous money changers stand indicted in the court of public opinion, rejected by the hearts and minds of men.

The money changers have fled from their high seats in the temple of our civilization. We may now restore that temple to the ancient truths. The measure of the restoration lies in the extent to which we apply social values more noble than mere monetary profit.

Recognition of the falsity of material wealth as the standard of success goes hand in hand with the abandonment of the false belief that public office and high political position are to be valued only by the standards of pride of place and personal profit; and there must be an end to a conduct in banking and in business which too often has given to a sacred trust the likeness of callous and selfish wrongdoing.

Restoration calls, however, not for changes in ethics alone. This Nation asks for action, and action now. 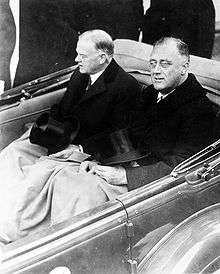 Hoover and Roosevelt on Inauguration Day, 1933.

Roosevelt then turned, in the following excerpts, to the daunting issue of unemployment, which had reached a staggering 25 percent when he assumed office:

...the withered leaves of industrial enterprise lie on every side; farmers find no markets for their produce; the savings of many years in thousands of families are gone.

More important, a host of unemployed citizens face the grim problem of existence, and an equally great number toil with little return. Only a foolish optimist can deny the dark realities of the moment.

Our greatest primary task is to put people to work. This is no unsolvable problem if we face it wisely and courageously.

There are many ways in which it can be helped, but it can never be helped merely by talking about it. We must act and act quickly.

After touching briefly on foreign relations — "the policy of the good neighbor — the neighbor who resolutely respects himself and, because he does so, respects the rights of others" — Roosevelt turned again to the economic crisis, assuring his countrymen that he would act swiftly and with determination:

I am prepared under my constitutional duty to recommend the measures that a stricken Nation in the midst of a stricken world may require. These measures, or such other measures as the Congress may build out of its experience and wisdom, I shall seek, within my constitutional authority, to bring to speedy adoption.

But in the event that the Congress shall fail to take one of these two courses, and in the event that the national emergency is still critical, I shall not evade the clear course of duty that will then confront me. I shall ask the Congress for the one remaining instrument to meet the crisis — broad Executive power to wage a war against the emergency, as great as the power that would be given to me if we were in fact invaded by a foreign foe.

After the inaugural address, a woman by the name Sarah Love said "Any man who can talk like that in times like these is worthy of every ounce of support a true American has."[3] Love's quote is reflective of the popular sentiment felt for Roosevelt's dynamic, confident, and inspiring oratory.

Close aide Raymond Moley was responsible for crafting the speech, as he did many of Roosevelt's speeches.[3] The idea of likening Roosevelt's coming task to commanding a war effort originated from Moley.[4]

The day after his inauguration, Roosevelt assembled a special session of Congress to declare a four-day bank holiday, and on March 9 signed the Emergency Banking Act, which provided a mechanism for reopening. He continued on for what became his First Hundred Days of the New Deal.