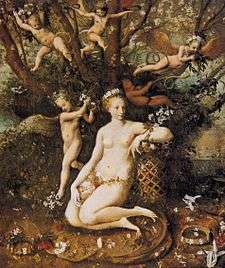 In Roman mythology, Flora (Latin: Flōra) was a Sabine-derived goddess of flowers[1] and of the season of spring[2] – a symbol for nature and flowers (especially the may-flower). While she was otherwise a relatively minor figure in Roman mythology, being one among several fertility goddesses, her association with the spring gave her particular importance at the coming of springtime,[3] as did her role as goddess of youth.[4]

Her name is derived from the Latin word "flos" which means "flower". In modern English, "Flora" also means the plants of a particular region or period.[5]

Her festival, the Floralia, was held between April 28 and May 3 and symbolized the renewal of the cycle of life, drinking, and flowers.[6] The festival was first instituted in 240 B.C.E but on the advice of the Sibylline books she was given another temple in 238 B.C.E. At the festival, with the men decked in flowers, and the women wearing normally forbidden gay costumes, five days of farces and mimes were enacted – ithyphallic,[7] and including nudity when called for[8] – followed by a sixth day of the hunting of goats and hares.[9] On May 23 another (rose) festival was held in her honor.[6]

Flora's Greek equivalent was Chloris, who was a nymph. Flora was married to Favonius, the wind god also known as Zephyr, and her companion was Hercules.

Flora achieved more prominence in the neo-pagan revival of Antiquity among Renaissance humanists than she had ever enjoyed in ancient Rome.

Flora is the main character of the ballet The Awakening of Flora. She is also mentioned in Henry Purcell's Nymphs and Shepherds.

There are many monuments of Flora, e.g. in Capitoline Museums in Rome (Italy), in Valencia (Spain) and Szczecin (Poland) (see Statue of Flora in Szczecin).