Florida in the American Civil War

Florida joined the Confederate States of America at the beginning of the Civil War, as third of the original seven states to secede from the Union, following Lincoln's 1860 election. With the smallest population, nearly half of them slaves, Florida could only send 15,000 troops to the Confederate States Army. Its chief importance was in food-supply to the south, and support for blockade-runners, with its long coastline full of inlets, hard to patrol.

On the outbreak of war, the Confederates seized many of the state's army camps, though the Union retained control of the main seaports. But there was little fighting in Florida, the only major conflict being the Battle of Olustee near Lake City in February 1864. However, wartime conditions made it easier for slaves to escape, and many of them became useful informers to Union commanders. As southern morale suffered, deserters from both sides took refuge in Florida, often attacking Confederate units and looting farms. Tallahassee became the second-last Confederate state capital to fall to the Union army. In May 1865, Federal control was re-established, slavery abolished, and the state governor John Milton shot himself, rather than submit to Union occupation.

Secession was declared January 10, 1861, and, after less than a month, Florida became one of the founding members of the Confederacy. The first six states to secede had the largest population of slaves among the Southern states. Although the vote to secede passed 62-7, there was a pro-Union and anti-Confederate minority in the state, an element that grew as the war progressed.

Florida sent a three-man delegation to the 1861-62 Provisional Confederate Congress, which first met in Montgomery, Alabama, and then in the new capital of Richmond, Virginia. The delegation consisted of Jackson Morton, James Byeram Owens, and James Patton Anderson, who resigned April 8, 1861, and was replaced by George Taliaferro Ward. Ward served from May 1861 until February 1862, when he resigned and was replaced by John Pease Sanderson.

According to historian William C. Davis, "protection of slavery" was "the explicit reason" for Florida's declaring of secession, as well as the creation of the Confederacy itself.[1] 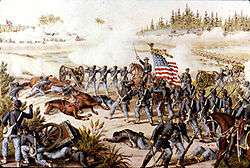 The Battle of Olustee was the only major Civil War battle fought in Florida.

As Florida was an important supply route for the Confederate army, Union forces operated a blockade around the entire state. Union troops occupied major ports such as Cedar Key, Jacksonville, Key West, and Pensacola early in the war. Confederate forces moved quickly to seize control of many of Florida's U.S. Army forts, succeeding in most cases, with the significant exceptions of Fort Jefferson, Fort Pickens and Fort Zachary Taylor, which stayed firmly in Federal control throughout the war.

Governor John Milton, an ardent secessionist, throughout the war stressed the importance of Florida as a supplier of goods, rather than personnel. Florida was a large provider of food (particularly beef cattle) and salt for the Confederate Army. The 8,436-mile coastline and 11,000 miles of rivers, streams, and waterways proved a haven for blockade runners and a daunting task for patrols by Federal warships. However, the state's small population (140,000 residents making it last in size in the Confederacy), relatively remote location, and meager industry limited its overall strategic importance. Milton worked to strengthen the state militia and to improve fortifications and key defensive positions.

Overall, the state raised some 15,000 troops for the Confederacy, which were organized into twelve regiments of infantry and two of cavalry, as well as several artillery batteries and supporting units. Since neither army aggressively sought control of Florida, many of Florida's troops were sent to serve in Virginia in the Army of Northern Virginia under Brig. Gen. Edward A. Perry and Col. David Lang. The "Florida Brigade" fought in many of Robert E. Lee's campaigns, and twice charged Cemetery Ridge during the Battle of Gettysburg, including supporting Pickett's Charge.

In early 1862, the Confederate government pulled General Braxton Bragg's small army from Pensacola following successive Confederate defeats in Tennessee at Fort Donelson and Fort Henry and the fall of New Orleans. It sent them to the Western Theater for the remainder of the war. The only Confederate forces remaining in Florida at that time were a variety of independent companies, several infantry battalions, and the 2nd Florida Cavalry. They were reinforced in 1864 by troops from neighboring Georgia.

By 1840 the Anglo-American population became the majority among people of European descent, influencing the development of the culture. It became more racist and based on a binary division of white and non-white, into which latter group the Muscogee (Creeks) and other Indians were classified. They were relegated to a status below the free people of color and above slaves.[2] White Floridians concentrated on developing the territory and gaining statehood. The population had reached 54,477 people, with African-American slaves making up almost one-half of it. Steamboat navigation was well established on the Apalachicola and St. Johns rivers, and railroads were planned.

By 1861, the slave population in Florida had reached 61,000. Their labor accounted for 85 percent of the state's cotton production. Confederate authorities used slaves as teamsters to transport supplies and as laborers in salt works and fisheries. Many Florida slaves working in these coastal industries escaped to the relative safety of Union-controlled enclaves during the American Civil War. Beginning in 1862, Union military activity in East and West Florida encouraged slaves in plantation areas to flee their owners in search of freedom. Some worked on Union ships and, beginning in 1863, more than a thousand enlisted as soldiers and sailors in the United States Colored Troops of the military.[3]

Escaped and freed slaves provided Union commanders with valuable intelligence about Confederate troop movements. They also passed back news of Union advances to the men and women who remained enslaved in Confederate-controlled Florida. Planter fears of slave uprisings increased as the war went on.[4] 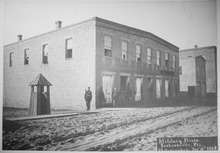 A military prison in Jacksonville, Florida, 1864. From the National Archives and Records Administration.

Though numerous small skirmishes occurred in Florida—including the battles of Natural Bridge, Gainesville, Marianna, Vernon and Fort Brooke—the only major engagement was at Olustee near Lake City. Union forces under General Truman Seymour were repulsed by Florida and Georgia troops and retreated to their fortifications around Jacksonville. Seymour's relatively high losses caused Northern lawmakers and citizens to question the necessity of any further Union actions in militarily insignificant Florida. Many of the Federal troops were withdrawn and sent elsewhere. Throughout the balance of 1864 and into the following spring, the 2nd Florida Cavalry repeatedly thwarted Federal raiding parties into the Confederate-held northern and central portions of the state.

In January 1865, Union General William T. Sherman issued special orders that set aside a portion of Florida as designated territory for runaway and freed former slaves who had accompanied his command during its March to the Sea. These controversial orders were not enforced in Florida, and were later revoked by President Andrew Johnson.

In early May 1865, Edward M. McCook's Union division was assigned to re-establish Federal control and authority in Florida. Governor Milton committed suicide rather than submit to Union occupation. On May 13, Col. George Washington Scott surrendered the last active Confederate troops in the state to McCook. On May 20, General McCook read Lincoln's Emancipation Proclamation during a ceremony in Tallahassee, officially ending slavery in Florida. That same day, his jubilant troopers raised the U.S. flag over the state capitol building. Tallahassee was the next to last Confederate state capital to fall to the Union army. Austin, Texas fell the next month.

After meeting the requirements of Reconstruction, including ratifying amendments to the US Constitution to abolish slavery and grant citizenship to former slaves, Florida's representatives were readmitted to Congress. The state was fully restored to the United States on July 25, 1868.